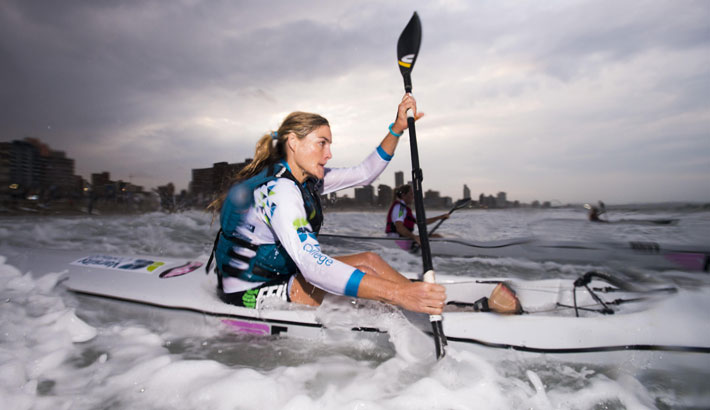 “Michelle is just such a phenomenal athlete and an example for so many of us girls, so to finish second in the series behind her is so awesome, and to have even had a sprint up the beach in one of the races was like a dream for me!” said Russell.

Some trying surf, a strong North Easterly wind and large swells meant it was going to be a testing affair throughout however few would have predicted how even some of the world’s top ocean paddlers would struggle at the start.

“Tonight it was really mushy with the wind coming from the East and the swell from the West so in terms of conditions it was in fact probably my worst race,” she laughed.

“I got hammered at the start then t-boned someone just past the backline, and then I got smashed again on my way in, so I’m glad to be on dry land again. But it was awesome being out there again, as always. I just love paddling on the sea!

“It’s been awesome to get a few wins under the belt in these last the few races and now I’m really looking forward to the Bay Union Surfski Series in the winter and I’m hoping to paddle the Mauritius Classic as well as the Pete Marlin in East London which is part of the world series,” she added.

The final round of the series also doubled as the Varsity College SA Schools Surfski Championships, and some of the country’s finest junior talent gathered to bravely take on the challenging conditions, and one another, in search of the prestigious national title.

Under-18 girls defending champion Kirsten Flanagan overcame a disastrous start – which saw her take two tiring and costly swims in the surf, to claw her way back and pick up her second title in the age-group in as many years, and her third consecutive title, after clinching the under-16 girls’ top spot in 2012.

“I’m really stoked to have defended my title and to make it two in a row,” said Flanagan. “It was a little disappointing that there weren’t a few more girls on the line, but I’m still happy with my result.

“It was really tough out there, especially getting out through the surf. I got smoked twice on my way out and so had to work really hard after that but I didn’t panic, especially knowing it was quite a small field,” she added.

Flanagan was also the recipient of the coveted Varsity College bursary to the tertiary institution’s Sport Life programme valued at over R40000.

KZN’s Kyeta Purchase showed good determination to overcome the elements as she claimed the under-16 girls national title.

The Varsity College Marine Surfski Series wraps up with its final prize giving at Billy the Bums on Tuesday 18 March, after which the KZN surfski community turns its attention to winter’s Bay Union Surfski Series. More info can be found at www.marineseries.co.za

Photo caption: Springfield Convent’s Kirsten Flanagan made the trip up from the Western Cape for the Varsity College SA Schools Surfski Championships and bravely fought her way back to reclaim the under-18 girls title she won in 2013. Photo: Anthony Grote/ Gameplan Media