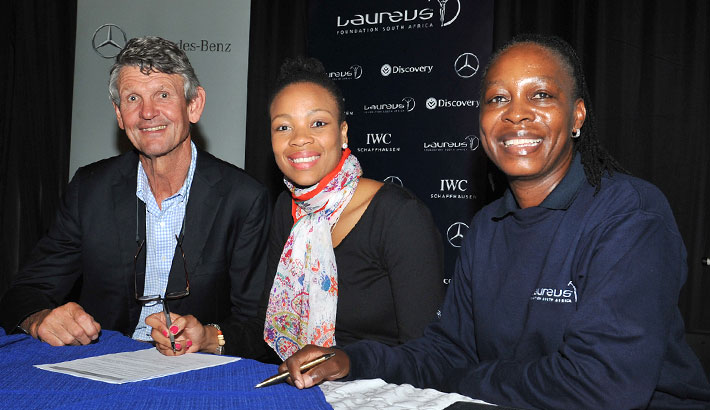 Mdodana also participated in coaching youngsters from the Laureus ‘Sport for All’ programme in Atteridgeville, who were hosted by MBSA at their 2014 Employee Volunteer Week activities.

Laureus has a long and distinguished history of using the power of sport to nurture the young South African leaders of tomorrow.  Morné du Plessis, Chairman of the Laureus Sport for Good Foundation Trust South Africa, says: “The passion and dedication of the Laureus ambassadors is a major driver of the success of our social upliftment programmes.

“We thank Zanele for accepting the nomination to join our ambassadors, and look forward to a long and successful association with her.”

Mdodana is a valued addition to the ambassador group and has established herself as one of the top-notch sports co-ordinators at the Nelson Mandela Metropolitan University.

Mdodana has great influence with young people, thanks to her impressive achievements. She urges young girls to prioritise their education, keep participating in sport and to strive to achieve their dreams and goals.

“It takes hard work to achieve anything worthwhile and you really need to persevere,” says Mdodana.

“It’s very important to get an education and I’d like to encourage every young person to make sure that they give their best in the classroom. This philosophy is something I will pursue as an Ambassador for Laureus,” she says.

The Laureus Sport for Good Foundation Trust South Africa supports 15 sports-based community programmes nationally. Since its inception, the Foundation has raised more than R80 million for projects which have helped to improve the lives of more than 78,000 young people.

Netball South Africa (@netball_sa; facebook.com/netballsa) president Mimi Mthethwa welcomed the accolade for Mdodana saying she deserved it for commitment and service to the national team over several years.

“Zanele is a wonderful role model and leader and will certainly appeal to sports people across boundaries. We are delighted that she has been chosen to be an ambassador for such a prestigious organisation and we know that she will fly the Netball SA flag high in carrying out her duties,” said Mthethwa.

“Netball reaches every level of society and this award is an important recognition for all women in the sport that enriches so many lives every day.”

MBSA, as a caring corporate citizen with more than 60 years in South Africa, has been a long-term donor to Laureus South Africa. The company supports the Laureus “Sport for All” project in Tshwane (Atteridgeville), the Buffalo City Soccer School project in East London where the company has its production plant, as well as the Youth Empowerment through Sport (YES) programme.

MBSA Corporate Affairs Divisional manager, Mayur Bhana explains that the company shares the Laureus goal of inspiring the youth of South Africa. “Young people need role-models who can inspire them and show them the path to success. The Laureus ambassadors are uniquely placed to achieve this.” “Sport is a wonderful medium through which life-skills can be taught to young people,” he adds.

The longevity of MBSA’s support for Laureus attests to the worth of the initiative, and goes to the heart of the company’s philosophy of participating in community development schemes that make a sustainable and meaningful impact.

Photo caption: Zanele Mdodana shares her netball skills with a group of youngsters from the Laureus Sport for All project in Atteridgeville, who participated in the Mercedes-Benz South Africa Employee Volunteer Week. Photo: Supplied