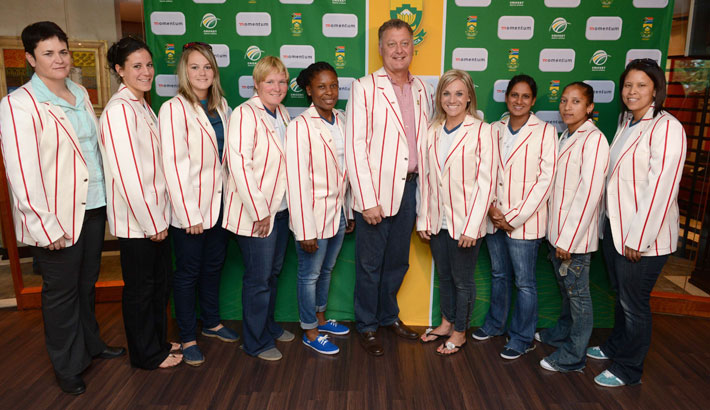 The 14-strong Momentum Proteas women’s squad that will compete in the ICC Women’s World Twenty20 later this month were the guest of honour at a send-off event, held at sponsor Momentum’s head office in Centurion.

The sponsors also took the opportunity to honour the some of the team and selected past players with commemorative Momentum Friendship Jackets, to acknowledge representation at national level and in recognition of their individual contribution to the development of the game.

The ICC Women’s World Twenty20 is being played in Bangladesh from 16 March to 2 April 2014. The team go into the championship with renewed confidence following recent strong showings against international teams.

Charlene Lackay, Head of External Communications at Momentum said: “We are very proud of the Momentum Proteas and hope the nation gets behind them as we have, and especially for this World Cup.

“We have seen fantastic effort from the players and their continued commitment is showing results,” continued Lackay. “Momentum is pleased that we were able to contribute to the appointment of full-time national coach Hilton Moreeng, who is helping produce these results.”

Commenting on his team, coach Moreeng said, “The pool of talent in the team is more than enough to stand up against these teams, but going to a World Cup we need to focus on team cohesion and getting the combinations right.

“Rainy weather conditions in the run-up have hampered our on-field training, but hopefully the added time spent on conditioning and fitness and in the nets will be of some benefit,” said Moreeng.

Captain Mignon du Preez added, “It’s definitely going to be a tough competition for us, and we won’t be taking anything or any team for granted.

“Having played and lost to Pakistan in the final of the T20 series in Qatar, we know how dangerous they can be. Australia and New Zealand are in the top four countries in the world, we will always adopt the wary approach when playing them – Wary but not intimidated!” the SA captain promised.

The Momentum Proteas have the full backing of CSA – CSA Chief Executive, Haroon Lorgat, extended his best wishes to the Momentum Proteas. “The team has made big strides in appreciating the standard of competition needed at international level. We want them to become a competitive force in world cricket.

“This sponsorship symbolises an important advancement for women’s sport in our country as it has allowed us to centrally contract our coach and national women’s players,” said Lorgat