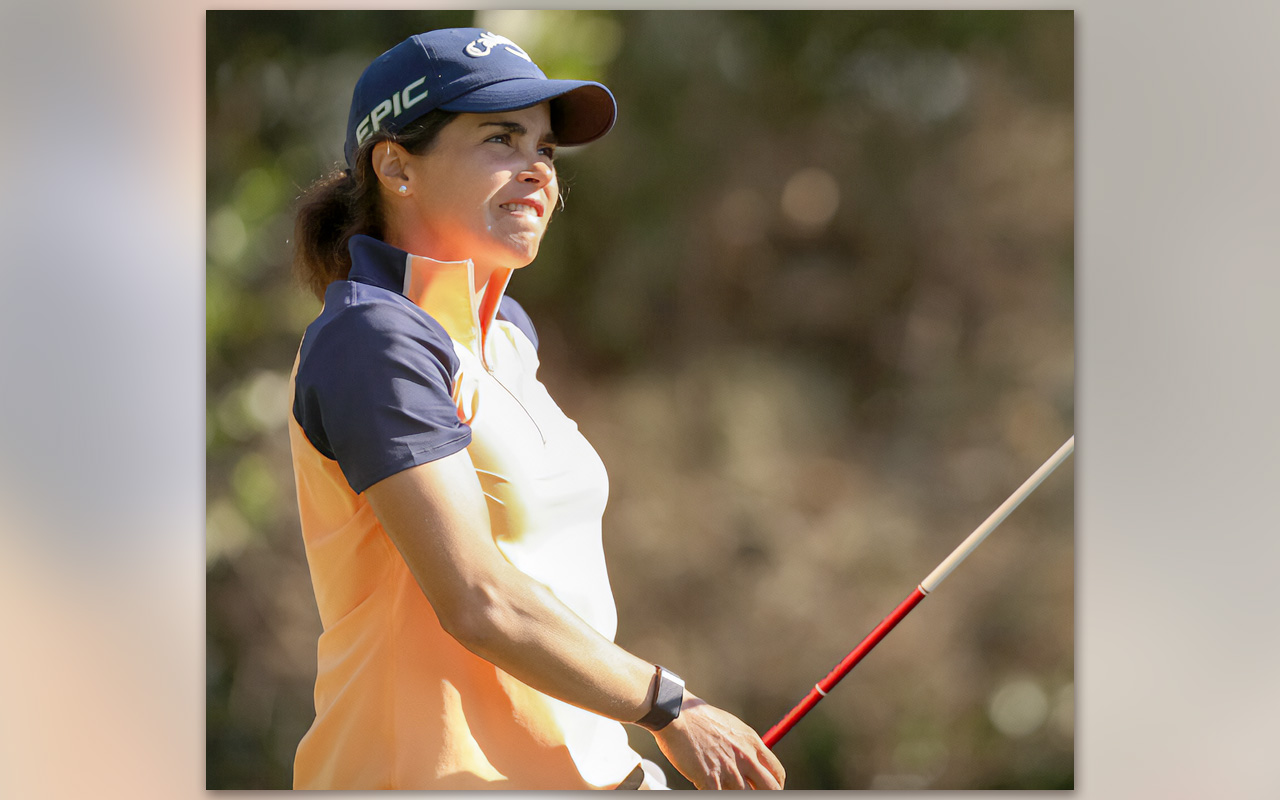 Maria Hernandez made the most of an early start and the tranquil conditions at Modderfontein Golf Club to fire a four-under-par 69 featuring five birdies for a two-shot early clubhouse lead in the opening round of the €250 000 Joburg Ladies Open on Thursday, 24 March, 2022.

The 36-year-old got off to the ideal start with birdies on the third and sixth holes in the Sunshine Ladies Tour and Ladies European Tour co-sanctioned event.

Her only dropped shot of the day came at the ninth, but she bounced back with a brace of the birdies on the 14th and 15th holes and knocked in a birdie putt at the closing hole to take the lead.

With the wind swirling in the afternoon and her target going unchallenged, Hernandez was delighted with her work on foreign soil.

“I played really solid today,” said the Spaniard after the first day’s play.

“I managed to stay out of trouble, and when I needed to I made up-and-downs, so it was a solid round!” Joburg Ladies Open Day 1 Clubhouse leader, Maria Hernandez

“The course is in great shape and the greens are really good. When the wind picked it up it made it a bit more challenging, but the greens were in good shape, so that was a plus. The back nine is trickier. On the front nine you have the three par-fives, so it’s easier to have a chance for birdies, but I actually played better on the back nine, so I’ll take it.

“It’s my third time out here and I love South Africa. I like the people; I love the environment and I always enjoy it when I come here.”

Alexandra Swayne from the US Virgin Islands, Germany’s Luisa Dittrich, Smilla Soenderby from Denmark and Italy’s Virginia Carte tied for second on two-under.

Swayne made her Ladies European Tour debut in January and the 21-year-old made an impressive start event on South African soil.

“I started on the back nine and I was even par, and I knew the front nine was going to be difficult, but I finished with an eagle and birdie, so it doesn’t feel like I shot two-under because I finished like that, but it was okay,” Swayne said.

“This is my third LET event so it’s been interesting. There’s a lot of travel for me from the Virgin Islands, but I’ve enjoyed it. I have no expectations – I go out there and have fun and hope a few putts drop. Golf’s a crazy game; you just have to go out and play your game.”

South Africans Nicole Garcia and Ivanna Samu finished a further stroke back in a tie for eighth.

Samu was still in amateur when the event was played at Modderfontein in 2018, and she finished joint second behind the champion Ashleigh Buhai. Back to full strength after a two-year battle with cancer, she got off to an eagle-birdie start and turned six-under, but three bogeys and a double-bogey on 14 put paid to all her earlier efforts.

“I struggled in the wind coming home, but I’m happy nevertheless just to be out there and competing again,” said the smiling 23-year-old. “I played a lot of golf here as an amateur and I know how tough the back nine can be in the wind. But I’m still happy with the start and hopefully I can build on it tomorrow.

In-form Garcia, hunting a first LET win and riding the confidence of a top 10 finish in the Aramco Saudi Ladies International last weekend, also made a strong start with a trio of birdies in her first four holes. But she gave back two shots on 15 and 17 and two more bogeys on the back nine saw her slip into a tie for eighth.

“It was a little bit messy,” Garcia said. “My ball striking wasn’t on today, which made it a bit difficult, especially off the tee and I had a few bogeys. I’m happy with the end result, though. Considering I wasn’t hitting it 100%, there were a lot of positives to build on for tomorrow.

“The wind picked up and there’s was a storm coming in. This course isn’t so easy when you have a wind gusting to compete with, but I think I will have the better side of the draw tomorrow morning with a storm forecast in the afternoon.”

Sweden’s Linn Grant – a two-time winner on the Sunshine Ladies Tour this season and the current Investec Order of Merit Leader – and 2020 Investec South African Women’s Open champion Alice Hewston from England are also in the bus at one-under alongside Manon De Roey from Belgium, Finland’s Noora Komulainen and Frenchwoman Emma Grechi.