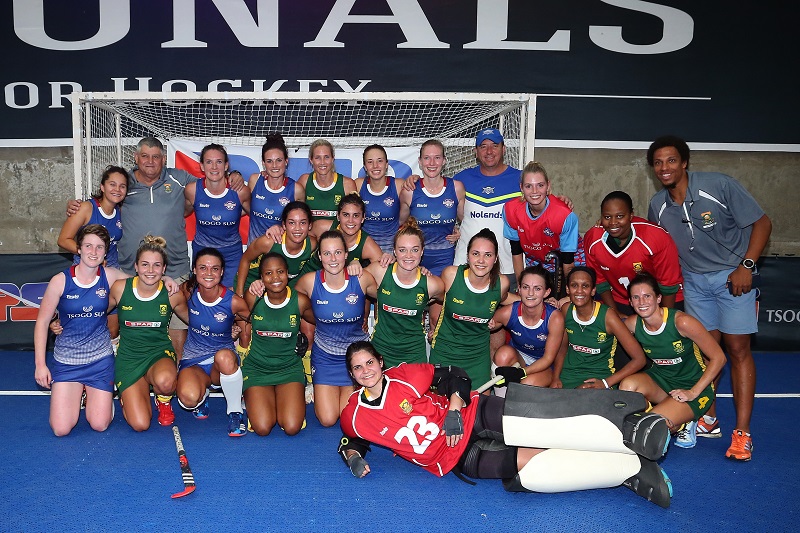 The final game of the Psi Exhibition series was played in front of another capacity crowd at UCT Sports Centre. SPAR South Africa were using the series to prepare for their upcoming test series against world number 5 Czech Republic and world number 7 Switzerland. For the coaching staff featuring Lennie Botha, Robyn Morgan, Brighty Mashaba and AJ Spieringshoek, they will be largely satisfied with the progress the team has made in a thrilling series.

The match started with a bit of a scary incident as Tegan Fourie took a bad knock to the eye and the game was stopped for a few minutes for her to receive treatment. Fourie was taken to hospital and received the news that she would be okay for the European tour. That scare seemed to set a bit of a surreal environment at the arena, but the game sprung to life just before half-time when Lena Lindstrom finished a team move to give the All-Stars the lead.

SPAR South Africa surged forward though and got the goal through a superbly worked penalty corner as Cindy Hack set up Kelly Reed for the finish. It was a goal that was fully deserving and a half-time score of 1-1 was a fair score line based on the match seen so far.

The second half followed the same tactical route with both teams reducing opportunities and space to a minimum. When called upon Alexander Heerbaart and Cheree Greyvenstein were in superb form to keep the scores level. The All-Stars finally took the lead with a trademark powerful flick from Marlena Rybacha.

SPAR South Africa once again surged forward and thought they had levelled as an infringement in their D was allowed to play on and then they went up the other end and Kelly Reed scored past on onrushing Heerbaart. The decision left the crowd disappointed as a short corner was awarded to the International All-Stars and Rybacha smashed it home. 3-1 the final score.

After the game Jessica O’Connor the vice-captain of SPAR South Africa was full of praise for Pro Series Indoor and the teams development:

“It is unbelievable what Pro Series Indoor is doing for the country and for the development of the game of indoor hockey. We hadn’t played together as a team too much when we got here, and we quickly learnt to fight for each other and grow as a team. I am excited for the tour to Europe in January. We are a team that plays with full hearts and that’s what really matters!”

The South African Womens team vs The All Star International Womens Team match held as part of the PSI 2018 Nationals U16 & U18 played at UCT Sports Centre on 19th December 2018 in Cape Town, South Africa. Photo by Shaun Roy