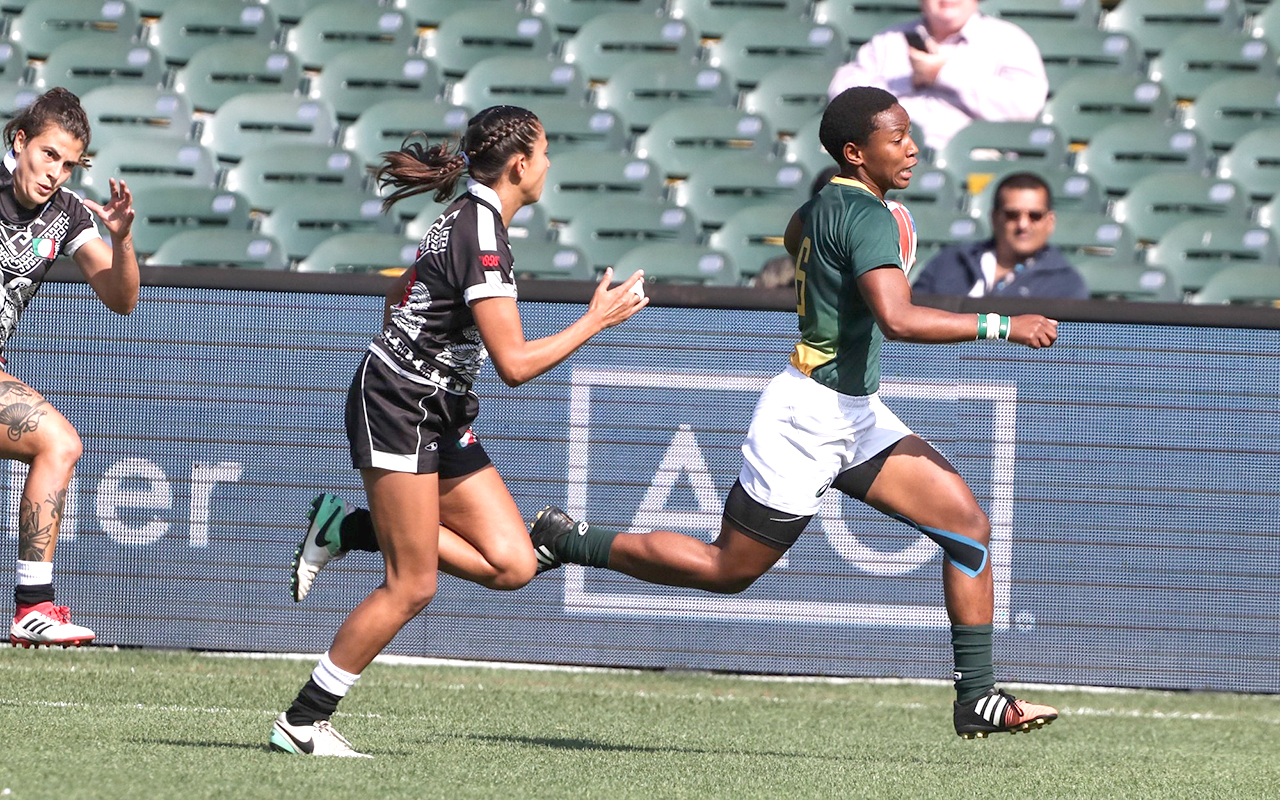 Springbok Women’s Sevens coach Paul Delport said the emergence of four debutants in his team at the Rugby World Cup Sevens 2018 bodes well for the future of the squad and could boost their chances in tournaments to come.

The Springbok Women’s Sevens team placed 14th at the tournament, won by New Zealand at the AT&T Park in San Francisco. This is one position lower than in 2013, when they finished 13th in Moscow, Russia.

“We finished 14th, which was obviously not what we wanted, as it is slightly worse than what was achieved in the previous World Cup,” said Delport. “That said, some new faces really produced some excellent play and I am excited about their future contributions in the team.”

Two of the newcomers, Snenhlanhla Shozi and Kimico Manuel, scored seven of the nine tries for the team in their four matches, while Babalwa Latsha and Buhlebethu Sonamzi impressed with their ability to disrupt opponents at the breakdown.

Latsha, who scored a try against Russia on the first day of the competition, also delivered some bruising defence that knocked back ball-carriers.

“Those four in particular showed me the way forward and they will no doubt be part of our plans when we commence our season in September,” said Delport.

Kimico Manuel talks us through her first, second and third tries for her country! #RWC7s pic.twitter.com/VimAtDfGo4

Deport said the fact that they are not part of the HSBC World Rugby Women’s Sevens Series hampers their progress.

“We need to try and qualify (for the series) again,” said Delport. “We are losing ground to those teams playing in the World Series and the gap is increasing. We will have to play in more tournaments as well.”

After defeats to Russia and China on the opening day, the SA Women’s Sevens team started the second day very well and totally outplayed by Mexico 34-0, scoring six tries in the process. Shozi and Manuel scored three tries each in every half, creating a bit of statistical history for the team.

Shozi became the first Springbok Women’s Sevens player to score a hat-trick for her country in the Rugby World Cup Sevens and seven minutes later, Manuel equalled this feat and became the second.

The team started the day without the services of Zenay Jordaan, who was playing in her third Rugby World Cup Sevens and when they lost Manuel as well before their final match against Brazil, they were battling.

The South American side dominated possession against the South Africans to win 22-0 and move into 13th place overall.

“They were better than us in this match. Again, we did not respect the ball or the game plan and that cost us,” said Delport of their final match.

Stats Wrap – RWC7s San Francisco 2018:
The SA side make the third most tackles on average per game and had a 79% tackle completion. Nadine Roos made 18 tackles for the team, bettered only by Shannon Izar of France with 20.
Most points:
Snenhlanhla Shozi 20
Kimico Manuel 15
Zenay Jordaan 10
Most tries:
Snenhlanhla Shozi 4
Kimico Manuel 3
Most conversions:
Zenay Jordaan 2
Zinhle Mpupha 2