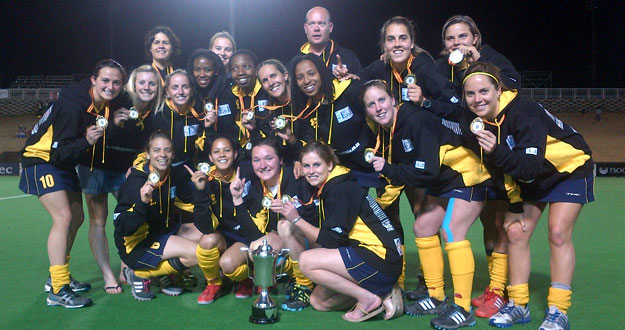 The 2013 SA Women’s Interprovincial Tournament takes place at the KC March hockey venue in Gelvandale, Port Elizabeth from Tuesday until Saturday and the likelihood is that last year’s medallists – champions Southern Gauteng, finalists Western Province and bronze winners Northern Blues – will again be among the medals.

(Click to read the wrap of the 2012 IPT which saw Southern Gauteng reclaim their crown, which Western Province won in 2011, stopping the Randburg ladies from securing a hat-trick of consecutive wins)

Among a number of notable absentees is triple Olympian and Investec South Africa women’s hockey team captain Marsha Cox (née Marescia) who was unable to get time off work.

Cox has starred for Southern Gauteng for many years but fellow triple Olympian, Pietie Coetzee – the world record Test match goalscorer – will be going all-out to ensure that she steps up to collect the winners’ trophy for Southerns, as she did last year in Randburg.

Among the other absentees are double Olympians Tarryn Bright and Shelley Russell of Western Province, as well as Dirkie Chamberlain of Northern Blues.

Apart from Coetzee, Southerns have national players Sanani Mangisa and Lisa Deetlefs, as well as experienced former SA players Tsoanelo Pholo and Roxy Turner. The exciting Sammy Prost is just another of the quality players that make up the strong Southerns unit, while in coach Garreth Ewing the Johannesburg-based province have one of the best in the country.

Southerns face Eastern Province Tuesday, and much faith will be put by the vociferous, loyal home supporters in seeing a good showing from the host province this week. EP have in 2004 Athens Olympian Liesel Dorothy a highly intelligent, knowledgeable campaigner.

With the support of the likes of 2013 Junior World Cup forward Toni Marks, EP can spring surprises but it is the responsibility of each and every one of the home team to take ownership of their individual roles in the side.

Western Province, who lost 3-0 to Southerns in last year’s gold medal match to reverse the 2011 result, will again mount a strong challenge with players of the calibre of current SA striker Jade Mayne, London 2012 Olympian Illse Davids as well as experienced former national players in Hanli Hattingh and Farah Fredericks. WP face the young Free State side on day one.

Northern Blues coach Gregg Hesom surely has a mantelpiece top-heavy with silver and bronze medals and will be determined to reverse the trend. On a good day, Northerns have the ammunition to unsettle South African hockey’s heavyweights, Southerns and WP.

In the experienced former SA defender Kim Hubach, London 2012 Olympian and much-capped SA player Nicolene Terblanche, as well as two of the young crop of national players in striker Lilian du Plessis and goalkeeper Phume Mbande, Northerns have the core that could make the difference.

The Pretoria-based province open their campaign against Durban’s KZN Raiders.

Border, whose side contains the three Keet sisters, national player Marcelle as well as Samantha and Lee-Ann, meet North West. The Potchefstroom-based province will be strong favourites and have hugely experienced, yet still very young players in 100-plus Test match striker Sulette Damons and Celia Evans.

In the B Section – the second-tier competition that runs alongside the title tournament – one team determined to win promotion back into the A Section is KZN Inland.

The cross-pool playoffs are on Friday with the finals on Saturday.