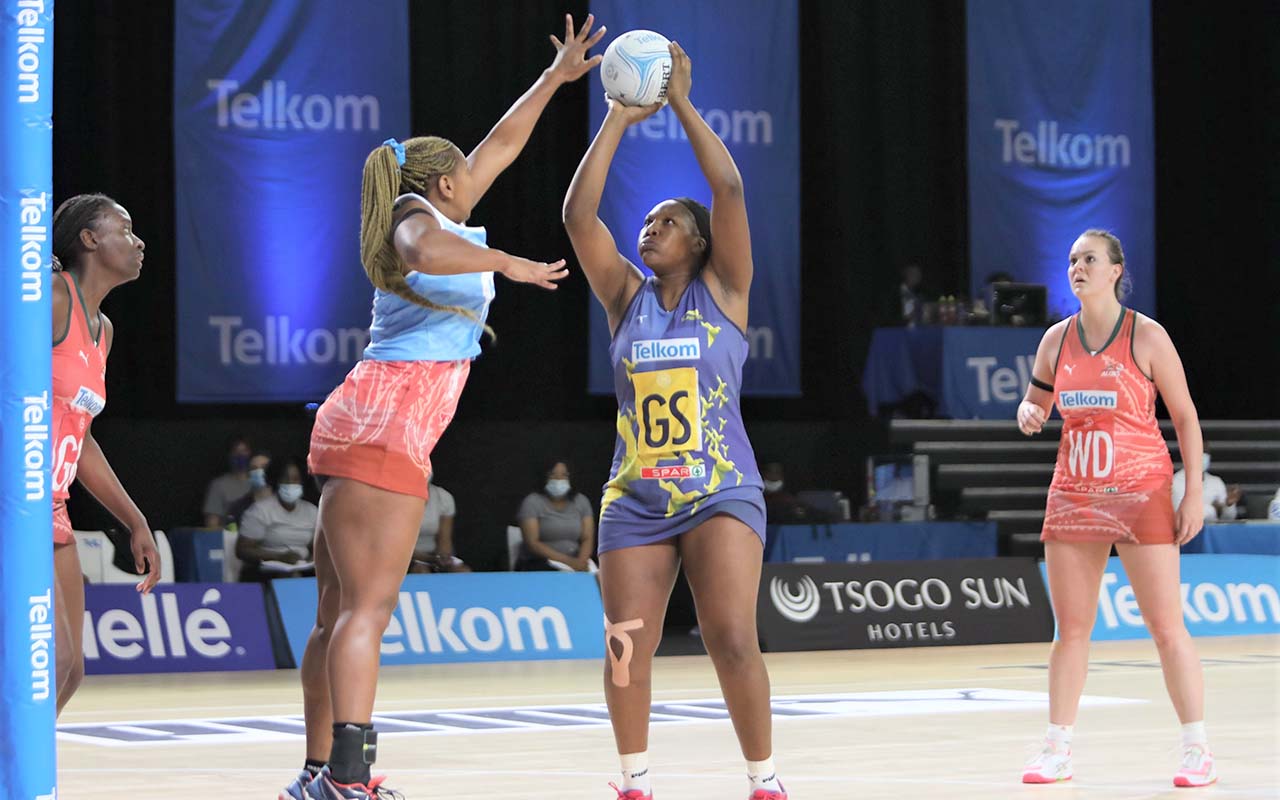 Mpumalanga Sunbirds won their first game in the second leg of the Telkom Netball League, beating Eastern Cape Aloes 45-43 in the tournament’s Division 2, in Rustenburg on Monday, 11 October 2021.

An intense first quarter ended eleven all, but it was Sunbirds who utilized their turnover balls to lead by two and three goals in the second and third quarter, respectively. Aloes who were mourning one of their former players and wore black bands around their arms, played it safe in the final quarter to minimize their mistakes and drew level in the last five minutes but Sunbirds Goalkeeper, Tumelo Nkoe’s crucial intercept steered the team to a much-needed win by just two goals.

“I think our team needed this, really badly. Everybody just came out guns blazing, and we pulled through.” – Sunbird Captain, Maryke Coetzee

“Palesa (Mbukwana) played an excellent game and that helped a lot,” Coetzee said.

“We are going to take it step by step because we need to have a few wins since we 5th now, hopefully that will change after today,” she concluded.

Division 1’s Southern Stings registered their seventh win in the league after escaping past Kingdom Stars with a 48-40 victory. Only one goal separated the two teams in the first quarter but Stars’ defensive unit of Jeante Strydom, Precious Mthembu and Danelle van der Linde were very instrumental at the back as the KZN side managed to level matters at half time.

Stings switched things up from the third quarter, attacking voraciously upfront and shooters, Nichole Taljaard and Sian Moore’s fast footwork ensured they finish off the job by sinking in those goals.

Tornados will remain at the summit of Division two after beating Kingdom Queens 42-39. Tornados’ coach, Danlee Matthews will certainly be disappointed in her teams’ high error rate after they recorded ninety-five penalties in this game which saw the Queens close the gap at some point. Queens’ coach, Zola Starke was all smiles after the match despite losing the game and commended her team for the tenacity showed on court.

Fireballs bounced back after trailing behind in the opening quarter to beat North West Flames 45-41. Fireballs were able to reproduce the form they displayed against Stings on Sunday but this time around, their efforts yielded positive results.

This was the second time the Division 1 Gauteng team beats Flames with the very same score line in this year’s edition of the Telkom Netball League. On the other hand, the Flames have two more matches to try and seek that elusive first win having lost all eight of their games so far.

A fiery Division 2 encounter between Eastern Cape Comets and Northern Cape Diamonds concluded the day. It was the Comets who were able to get over the line and a step closer to that top four finish after beating Diamonds 54-51.

Diamonds sent a stern warning from the onset, leading the first and second quarter but lacked discipline after the players were cautioned numerous times which resulted in a draw in the third quarter. Comets’ coach, Wendy Higson gambled on different combinations, one of them saw Shooter, Asekho Njeza being moved to the Goalkeeper position but all that paid off in the end.

“Our girls really worked hard in the end, and I wish they had started like this. They like chasing instead of doing what they are told but eventually they managed to do what we asked. We told the girls that they have got what it takes to get up there, we have one foot in the door towards the finish line, so all they have to do is to play their hearts out, play as a team and do as they told,” Comets assistant coach, Zandile Njeza commented after the game.

Photo 1 Caption: Sunbirds Goalshooter, Palesa Mbukwana put up a stellar performance to lead her team to a much-needed victory and earned herself Player of the Match accolades. Photo: Netball South Africa (Twitter)