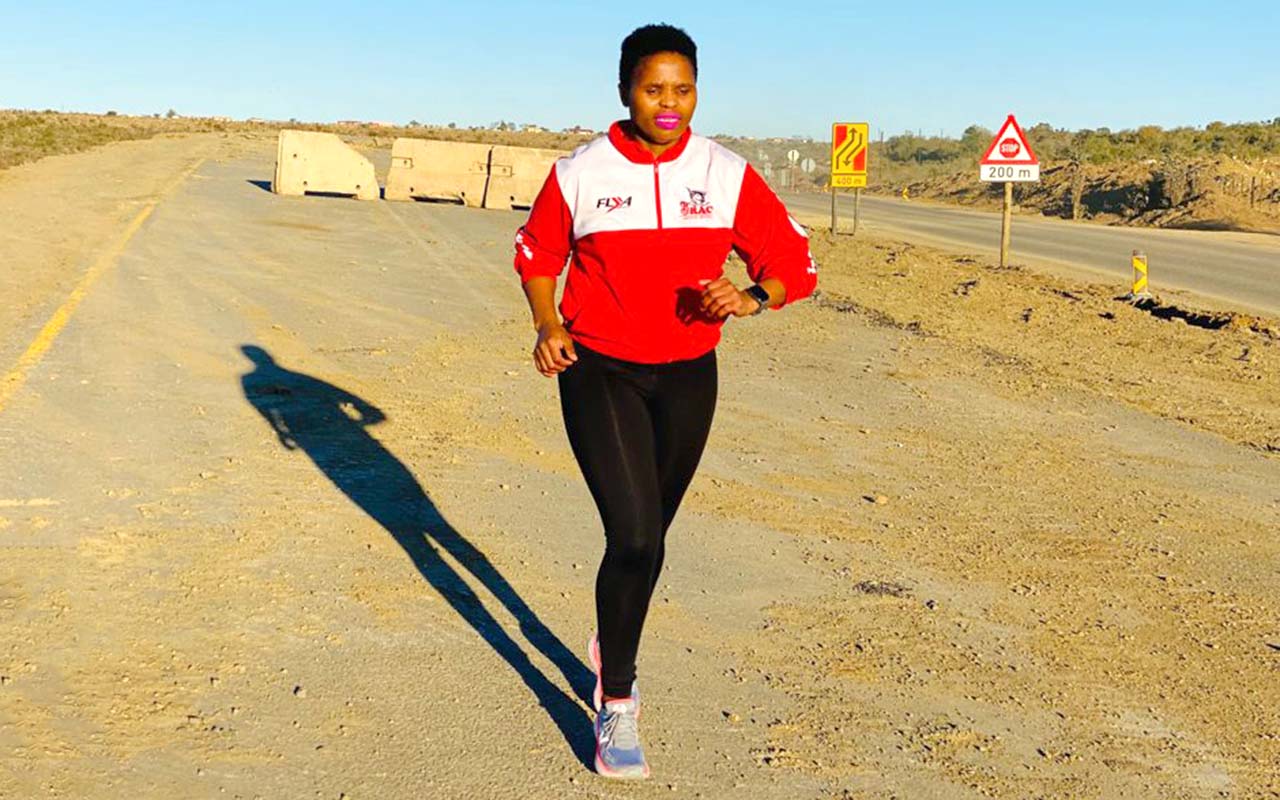 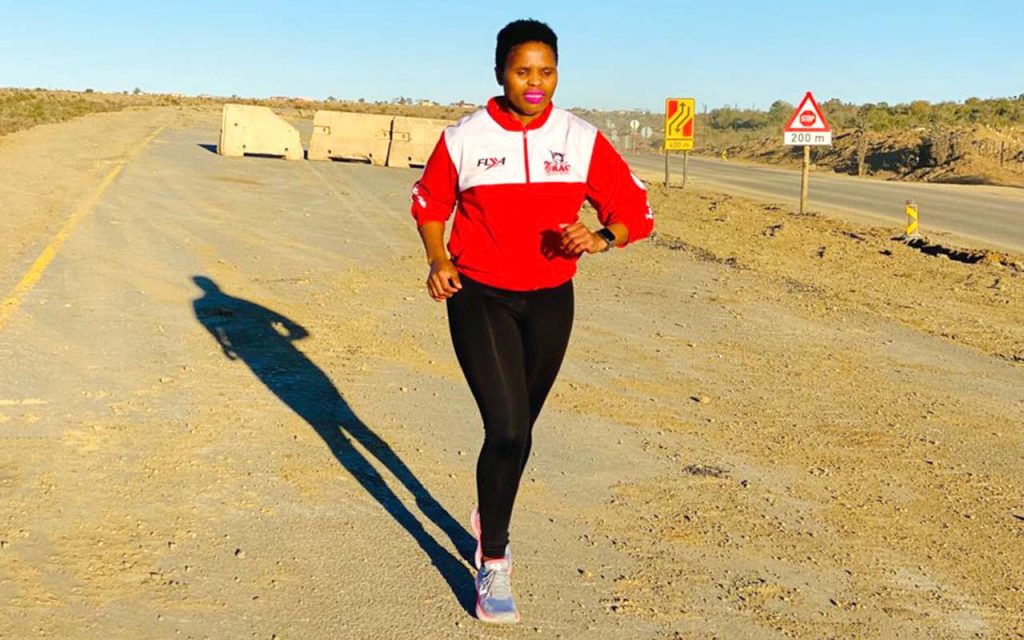 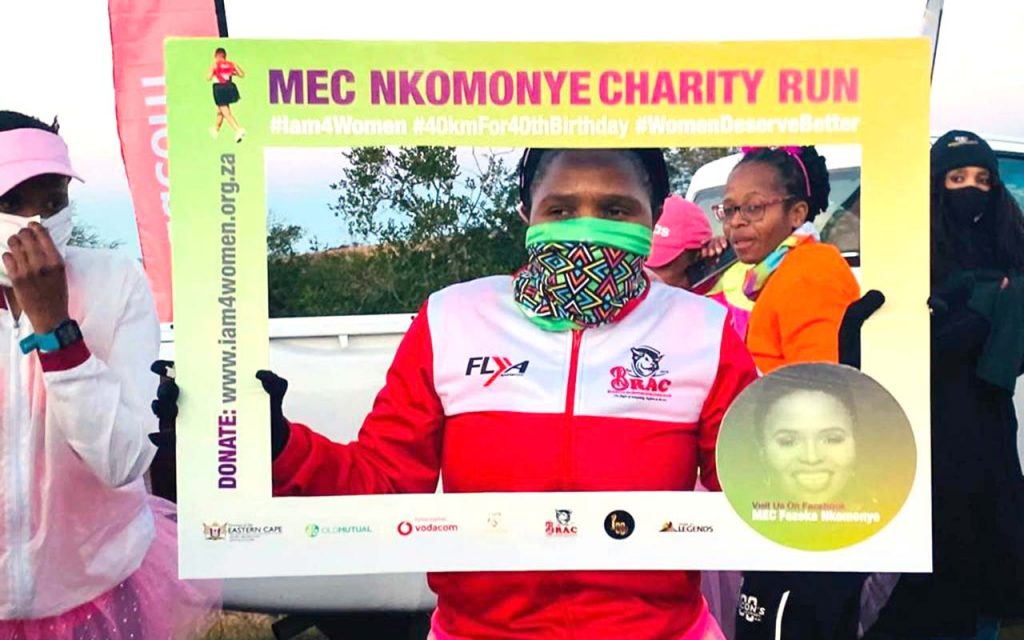 Eastern Cape Department of Sport, Recreation, Arts and Culture, MEC Fezeka Nkomonye, is a women’s sport advocate who believes much needs to be done to close the gap between men’s and women’s sport.

Since she took office, MEC Nkomonye has ensured that women in sport, from development to professional level in the Eastern Cape, receive top support from her office.

As a former sportswoman herself, having participated in road running, soccer and rugby during her teens, Nkomonye has first-hand experience of the struggles that aspiring women in sport face on their journeys to success.

That is the reason she has literally run more than mile to make sure that, from sport facilities and equipment to kit and boots, women in sport in the Eastern Cape are catered for. In celebration of her 40th birthday in August, Nkomonye hosted and ran a 40km Charity Run, aimed at creating awareness about the plight of women in sport.

MEC Nkomonye is proud of the athletes in her province and their achievements in tournaments like the Telkom Netball League and National Championships across sporting codes.

She spoke to gsport about her contribution and future plans for women in sport in the Eastern Cape, which include the construction of new facilities in the build-up to the 2023 Netball World Cup, and a partnership with SuperSport to create and broadcast new school leagues in the Province.

Good day, MEC Fezeka Nkomonye and thank you for taking time to speak to us. Can you please give us a brief background of who you are?

Fezeka Nkomonye was born in Lusikisiki and started being involved in sport as an athlete (short distance runner, football and rugby player) at an early age. Growing up during apartheid years I understood that being involved in politics in my youth would be one way of making a contribution towards redressing the imbalances of the past.

I grew in the mass democratic movement structures and later became a public representative in the Eastern Cape Provincial Legislature from the year 2009.

You are an avid women’s sport supporter and that has shown through the programmes that you have been running in the province. What sparked your interest in women’s sport?

As an athlete I have always experienced and seen inequality in sport. Whether one looks at the inequality using a race or a gender lens, it has always been there and it still exists.

Women in sport, particularly black women are not given support (financial and moral support) and are not enjoying the same exposure as their male and white female counterparts.

What is even worse is that when discussions to address inequality in terms of race representation in sport, gender equality was never considered. Women in sport even at professional level lack sponsors and basic things such as sport bras, takkies and boots as well as training and playing facilities.

All of these challenges have drawn my attention to the plight of women in sport.

Recently you handed out women’s sport attire, boots and other sport’s training gear to EP Rugby and the Border Rugby Women’s team. What other initiatives have you been involved in, pertaining to women’s sport in the province?

Subsequent to the handover to the women’s rugby teams in the province who were participating in women’s National championships, we organized a 40 km Charity Run on the 28th of August.

This Charity Run was aimed at creating awareness on the plight of women in sport and also raise funds for basic needs of women in sport (sport bras, takkies, boots, sanitary towels and construction of sport facilities).

We have since bought more than 1000 sport bras and more than 30 takkies (for netball teams). We have sourced funding for construction of 3 multipurpose sport facilities and a refurbishment of a netball court in Joe Gqabi.

We are working on investing in sport facilities in preparation for the Netball World Cup in 2023. We are therefore still calling upon corporate, communities and government agencies to come on board and assist us in this cause.

In terms of women’s sports development and school’s sports what has the province done to make sure that they are also catered for?

As a province our vision for sport development is anchored on creating vibrant school sport. We have gotten into partnership with SuperSport to create leagues in schools. Those leagues will then be televised through SuperSport to expose the talent of young women and men in rural areas and townships.

Over and above this partnership we have just procured and delivered equipment to the value of R3 000 000 (three million rand) for learners who are actively involved in school sport. We provide support to female and male learners equitably.

What is the state of women’s sport in the province?

Challenges faced by women in sport are generic in the whole country. There is still glaring inequality in terms of resources, investment and support towards women in sport.

This province is however at an advantage in terms of the pool of talented women across all sporting codes. In National championships we always send two teams as a province in most codes and that is evidence of the talent in this part of the country.

Women are still paid lesser than their male counterparts and that is the reason why as a department we have put equality in remuneration as a condition for tournaments and races sponsored by the department.

When it comes to women football, the EC has only one team participating in the Hollywoodbets Super League, which is the highest professional women’s football league in the country. Where do you think the EC needs to improve in order to get more club’s from the province in the league?

Even though the province has one team in the Hollywoodbets Super League, we have a number of teams that are in the Sasol League and we believe in the future we stand a good chance of having more than one team in the Ashlee League.

We need as a province to strengthen development in the levels (Sasol league) below the Super league.

What has been you biggest achievement or highlight thus far, in terms of women’s sport in the province?

I have had a lot of highlights in the past two years. Seeing Eastern Cape Aloes crowned the National championships (Division 2) in the Telkom Netball League championships in 2019, Border Women’s Rugby crowned National Championships in August 2021 after Covid 19 impact on Sport and the improvements in Thunderbirds (currently placed 6th in the League). There are many other female athletes who have flown the EC and SA flag high.

With the wonderful work that you have done so far in supporting women’s sports I am sure you are already cooking something in your kitchen for 2022?

2022 will be bigger and better, watch the space. Some of the plans we have will be revealed early next year.

Lastly, what advice would you give to women in sport in the EC?

I would like to encourage them that they are talented, they are doing so much more and they must never despair. We are committed to support them in all the ways we know how. Lastly their dreams are valid, they must keep pushing.

Photo 1 Caption: Eastern Cape Department of Sport, Recreation, Arts and Culture, MEC Fezeka Nkomonye, is a women’s sport advocate who believes much needs to be done to close the gap between men’s and women’s sport. Photo: Supplied

Photo 2 Caption: Remembering her younger sporty days in athletics, soccer and Rugby, MC Nkomonyecelebrated her 40th birthday by hosting and running a 40km Charity Run aimed at creating awareness about the plight of women in sport. Photo: Supplied