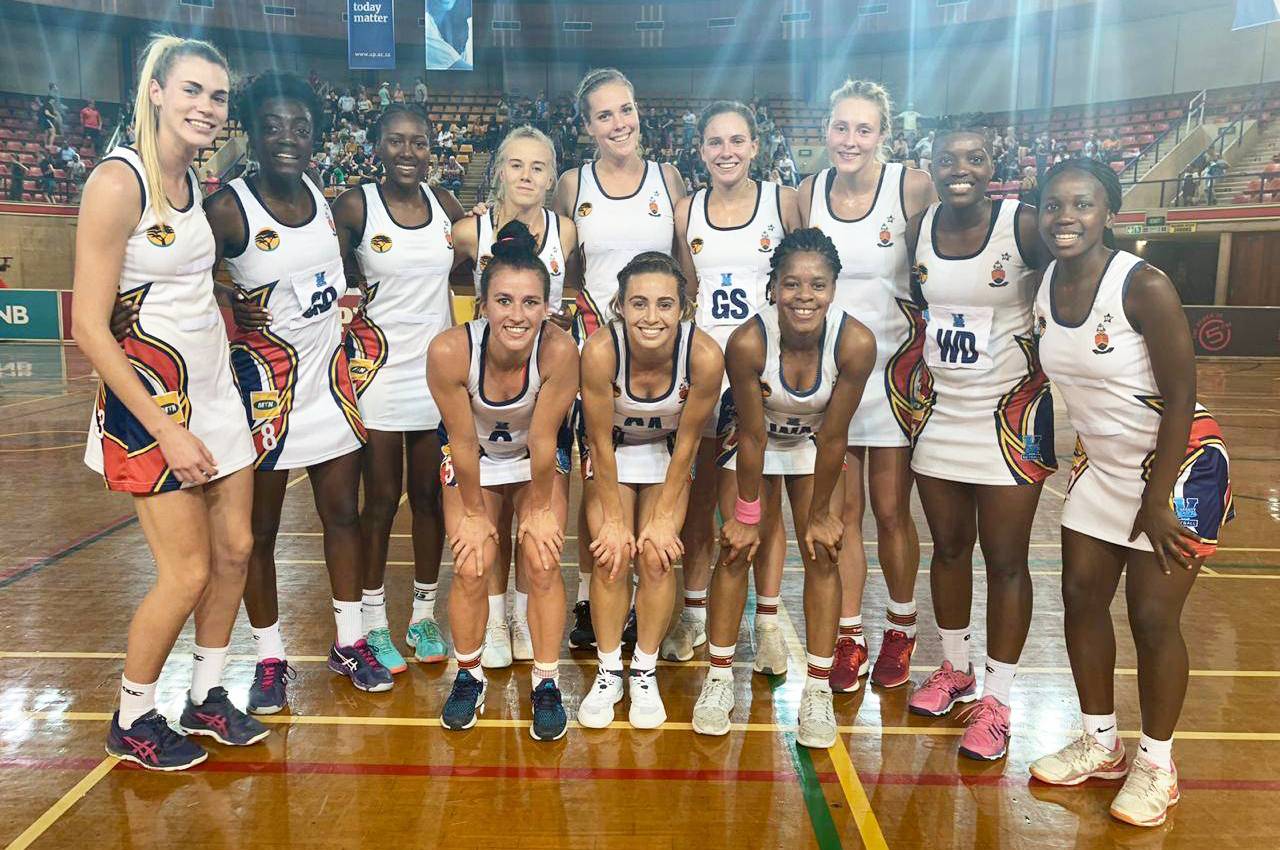 In the closest encounter of the season to date, NWU pushed table-toppers Tuks close before the bumper weekend hosts emerged victorious 46-43.

Both teams started off strong with interceptions from Leonie Maree allowing NWU to take the lead for the first time after five minutes of play. Although the side from Potchefstroom had ample opportunity to extend their lead, a disappointing goal-conversion rate kept Tuks hot on their heels. Interceptions on the other side of the court from Akosua Mensah then allowed the home side to even the score at eight goals apiece.

The final minutes of the quarter saw an improvement with an interception by Tuks captain Tshina Mdau, which was quickly followed by an interception by NWU’s Jessica du Plessis, but pressure under the NWU goal post allowed Tuks to capitalise and take the lead.

The Tuks defence seemed to rattle their opponents as the NWU side’s goal conversion rate began to decrease again.

With five minutes left in the first half, Tuks called their Powerplay and immediately capitalised. Despite multiple opportunities to close the gap, the poor conversion rate in the NWU goal circle kept them from scoring in the Powerplay.

A well-read pass by Jasmine Ziegelmeier and a caution for NWU’s Didintle Keebine ended the first half with the home side, Tuks, leading by 26 goals to 20.

NWU started the second half with changes in their defence as Monique Reyneke moved to goalkeeper, with Caitlinn Rousseau coming on at goal defence. Early pressure and better play from the ladies in purple and turquoise along with another interception from du Plessis, allowed them to lessen the deficit to three goals in the first five minutes of the half.

With nine minutes left in the third quarter, Tuks made changes in their goal circle as Chantelle Swart moved to goal-shooter, with Danielle van Zyl coming on at goal attack.

An interception from Rousseau and patient play by the NWU attack brought them within two goals of the home side.

Tuks quickly responded with clinical play and high goals percentage to regain their six-goal lead. With the NWU side having a better quarter, which they won by 12 goals to 11, and du Plessis showing her versatility with more interceptions, closed the gap to five goals as they ended the quarter trailing by 32 goals to Tuks’ 37.

The Tuks defence in the form of Ziegelmeier and Mensah continued to put pressure on the NWU goal-shooter, van Staden, to keep their NWU conversion rate low.

With just over eight minutes to play, NWU made changes with du Plessis moving to centre and Lucy Strydom coming on in the goal attack position, this was quickly followed by another NWU effort as they closed the deficit to a single goal.

With seven minutes left to play, at an opportune time to take the lead, NWU called for the Powerplay. Unfortunately, over thrown feeds into the NWU goal circle allowed Tuks to score the only double-pointer.

The home side did well to keep their composure, with a three-goal lead int eh final two minutes of the game to clinch the win with 46 goals to 43.

Tuks have all, but sealed top place, with only second bottom TUT to come next week, but NWU will effectively have a shootout for the final semi-final sport against Madibaz in Port Elizabeth next Monday.