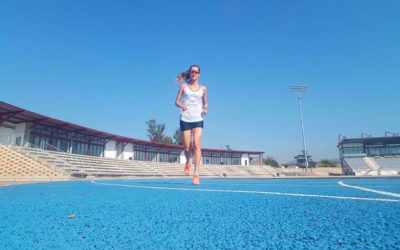 Sanders and Ackermann Gear Up for Olympic Qualifiers

South Africa‘s qualification for the 2009 ICC Women’s Cricket World Cup has put everyone involved in the administration of women’s cricket in top spirits and has reignited the passion to rebuild the women’s game in our country, and unearth talent in all parts of SA.

South African vice-captain Claire Terblanche admitted her side is full of confidence, ahead of their final group match against the Netherlands on Thursday.

The Netherlands captain Helmien Rambaldo accepts her Player of the Match award following her side’s 196-run victory over Bermuda on Tuesday. Picture Mouton van Zyl A captain’s innings from Helmien Rambaldo helped the Netherlands claim their spot in the semi-final of the ICC Women’s World Cup Qualifier as they defeated Bermuda by 196 runs.

South Africa keeper Trisha Chetty looks on as another Bermudan batswoman loses her wicket in their inning of 13 all-out, in 18 overs, which South Africa chased down in just four balls. Picture: ICC Bermuda Women were given a thrashing of their lives by South Africa Women in the ICC World Cup qualifier in Stellenbosch […]

Proteas batswoman Daleen Terblanche, pictured during the previous Women’s Cricket World Cup, is expected to play a key role in South Africa’s progress in the Qualifiers. Picture courtesy Cricket SA South Africa Women will rely on the experience of Daleen Terblanche for inspiration in their ICC World Cup qualifier which starts on Monday in Stellenbosch. […]