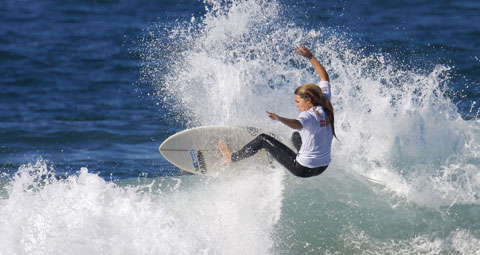 Great weather, one-metre surf and a light offshore all day ensured the success of the Durban version of this special and unique surfing tournament in Surf City. Over 40 girls participated in this event, which has become a feature of the Surfing South Africa calendar since it was first held to celebrate Women’s Day in 2010.

One of the highlights of the Durban contest was the number of rookies who competed, many of whom were surfing in their first ever major tournament. This important division, and a brand new Hutchison Handcrafted surfboard, was won by Sophie Bell who edged 13 old Samkelile Cele into second place. Kelly Medley was third and Gabi Lalivaux, who won a brand new Hutchison Handcrafted surfboard in the lucky draw, came fourth.

In the highly competitive Under 16 division most heats were tightly contested with current SA Under 15 runner-up and 2012 National Junior Team member Chanelle Botha taking the honours ahead of Teal Hogg. These two talented young surfers, along with third placed Olivia Brand and fourth placed Jade Story, define the future of South Africa’s up and coming female talent and have bright futures ahead of them.

The U20 division was a closely fought affair but in the end experience showed as current SA Under 20 champion Heidi Palmboom took the honours. National junior team member Nicole Pallet was runner up with Kat Steffan and Chanelle Botha placing third and fourth respectively.

In an entertaining Women’s final the lead changed several times between two time World Masters Champion Heather Clark and former SA Champion Tammy Lee Smith. With Clark leading and only moments to go before the final siren would end the heat, Smith posted an 8.0 ride to seal the deal. Under 20 winner Heidi Palmboom placed third in this final with Lynne Mackey taking fourth place.

Simultaneously, at Muizenberg in Cape Town …

Held in benign winter conditions with one-metre waves and light offshore winds, the Cape edition of this unique celebration of Women’s surfing went off without a hitch.

Not only did the event feature surfers from the Cape Peninsula but it also played host to a group of surfers who travelled all the way from the Eastern Cape to participate. In addition, six girls from the Isiqalo Waves of Change project competed in the Rookie Division, with two of them reaching the final.

The Rookie Division was won by Georgie Snaddon with Kiah Bettison taking second place ahead of Noncedo Mahunu, who was third, and Michelle Jonas who came fourth.

For the second time in three years, Anoush Zakarian won the lucky draw for a surfboard, which she will be able to order through Stubby Surfboards in Muizenberg.

Both venues were presented by Surfing South Africa (SSA) and supported by Sport and Recreation South Africa, and featured 1A rated PST events for Open Women, Under 20 and U16’s with R2 500 in prize-money at stake in each division while the Rookies won generous prizes.

All the results plus a photo gallery are available on the Surfing South Africa website.