Dominique Provoyeur (Team Manager/Skipper) of the all-girls’ Sailing Team Isigungu wrote to gsport, here’s their latest newsletter:
Pinch and Punch for the 1st of the month! And with that the beginning of July, the month of truth….!

Dominique, Penny and Kim are just days away from race 1 on the 5th July.  The bay of Cascais (30km west of Lisbon) is divided up into 5 course areas.
The Yngling fleet (36 boats) will be sailing on course numbers 3, 4, and 5 – with the majority of races on course 4, which is south of Cascais and about 3 nautical miles off shore.
For more information regarding Cascais and the championships take a look at www.sailing.org and follow the links to the ISAF Worlds.
South Africa has a few teams participating in these World Championships:
Dale Rae and Tiffany Baring-Gould – 470
Ricky and Brennan Robinson – 470
Greg Reuvers and Matthew Ricard – 470
Mark Sadler and David Rae – 49er
Dominique Provoyeur, Penny Alison and Kim Rew – Yngling
Dave Hudson -Team Manager (and coach, mentor, supporter, dad)
Dayne Sharp – Yngling Coach
Adam – 470 Coach
The regatta will consist of 11 races for our fleet.  The first 10 will be fleet races (all competitors will compete against each other) and the last race will be a medal race, where the points will count double (top 10 will race against each other).
This is done to draw media attention, and also avoid the possibility that the regatta could be won before the last race. The rest of the fleet will also have a final race, but not with double points.
These world championships is also the first of two events where sailors can qualify their nation for the Olympic Games in Beijing 2008. For the Yngling Fleet, the top 10 nations will qualify, there are 21 nations in contention.
We will be having 2 races per day, with a rest day on Sunday, 8th July. Each race will be approx. 1h15 in winds predicted to be between 15 to 25knots.
As we have learnt the wind is never as predicted so be prepared for any and everything.  (it is what it is…..!). The opening ceremony is tonight….. let our game begin.
Thanks to all for the support and words of wisdom and encouragement.

Dominique Provoyeur – Team Manager/Skipper
Sailing Team Isigungu
Yngling Olympic Campaign – Beijing 2008
Website: www.isigungu.com
THE CHALLENGE AHEAD OF US IS NOTHING COMPARED TO THE POWER WITHIN US 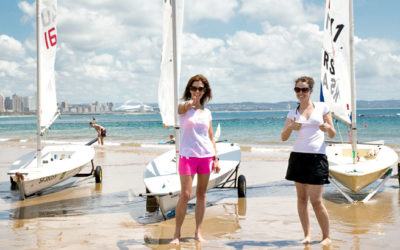