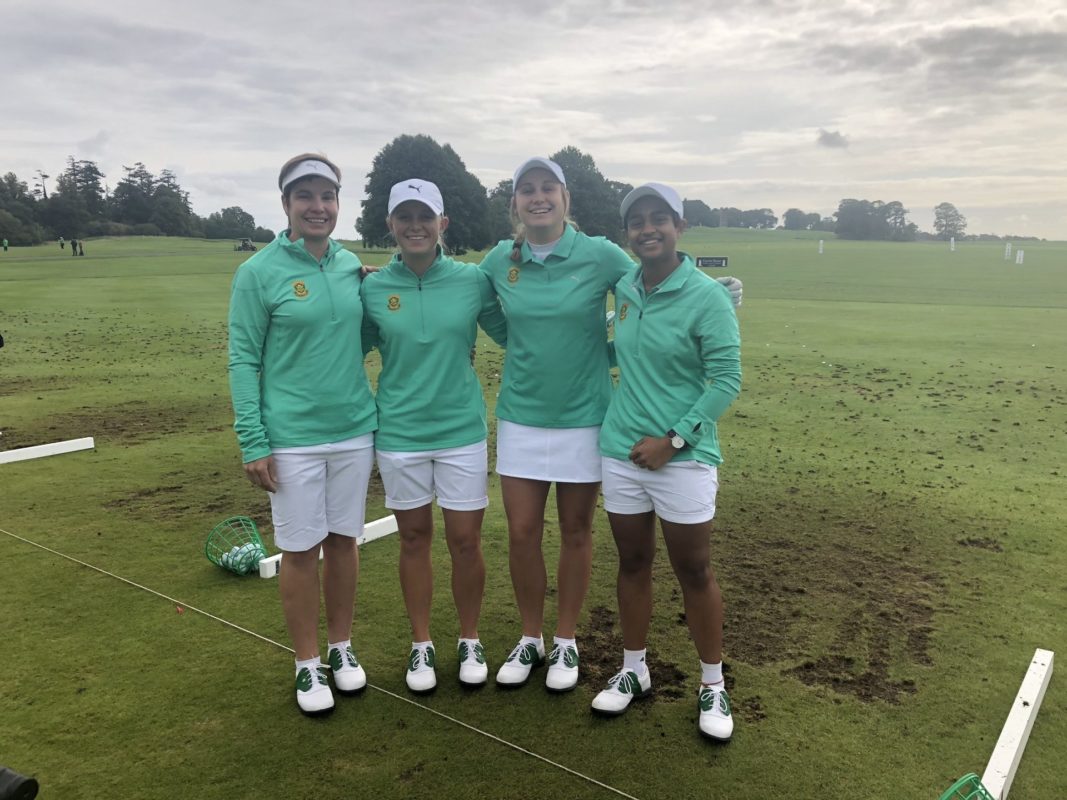 MAYNOOTH, Ireland (31 August 2018) – Caitlyn Macnab, Kaleigh Telfer and Kajal Mistry are fired up to make the most of moving day after a much better show in the second round at the World Amateur Team Championship on Thursday.

The South Africans posted a team total of 144 at the Montgomerie Course at Carton House and will start the third round in joint 26th on four-over 294 with Chinese Taipei in the 28th Espirito Santo Trophy.

“We would have liked to have had another couple of birdies, but we were really happy with the improvement from all three players,” said Womens Golf South Africa president Sally Greasley.

“Caitlyn shot one-under 71, Kaleigh 73 and Kajal 74. We improved six shots on our opening round and that was playing the tougher of the two courses. We are playing the Montgomerie again today and we are keen to see if they can improve even more.”

Greasly said the biggest frustration has been the diverse greens at Carton House.

“It was a sunny, calm day, but the birdies were hard to come by. All three players struggled with the speed at the Montgomerie Course, which is very different to the greens at the O’Meara course and on the practice green,” Greasley said.

“The greens are very undulating and the majority are raised. If a putt doesn’t finish in the right spot, it quickly trickles down into the semi rough surrounding the greens. The pot bunkers were another challenge, especially for Kajal. She visited several on her back nine, but she made a couple of fantastic up-and-downs, in particular her chip-in on 12.

“The tournament is building up very nicely to a climax. The Americans showed today what can be achieved, and our girls have taken that on board and will be going out today with determination to come in under par.”

Macnab, who turned one-under and played the back nine in level par, believes the team can do better.

“We all struggled with the pace of greens, but I took a lot of confidence from hitting more greens in regulation at the Montgomerie and making some great par saves,” said the 16-year-old GolfRSA Elite Squad player from Ekurhuleni.

“I also scrambled incredibly well to keep the bogeys off my card. I had a really good bunker shot at 12 from a plugged lie. I couldn’t see the pin, but I hit a great shot that lipped the hole. At 13, a short par four. I drove it into the thick rough on the left. I had 75 pin, and my second came out high, like a flop-shot, and landed two feet from the flag. I made the putt for birdie and kept the round going.

“All three of us had a better day and if we can just get a few more putts to drop today, we can come in under par. We really want to get inside the top 20 before the final round.”

Meanwhile the United States set a 36-hole scoring mark, fuelled by matching bogey-free rounds of eight-under from Jennifer Kupcho and Kristen Gillman on the O’Meara Course.

The USA will take a one-stroke lead on 18-under into moving day over defending champion Republic of Korea and will start three strokes clear of first-round leader Japan.