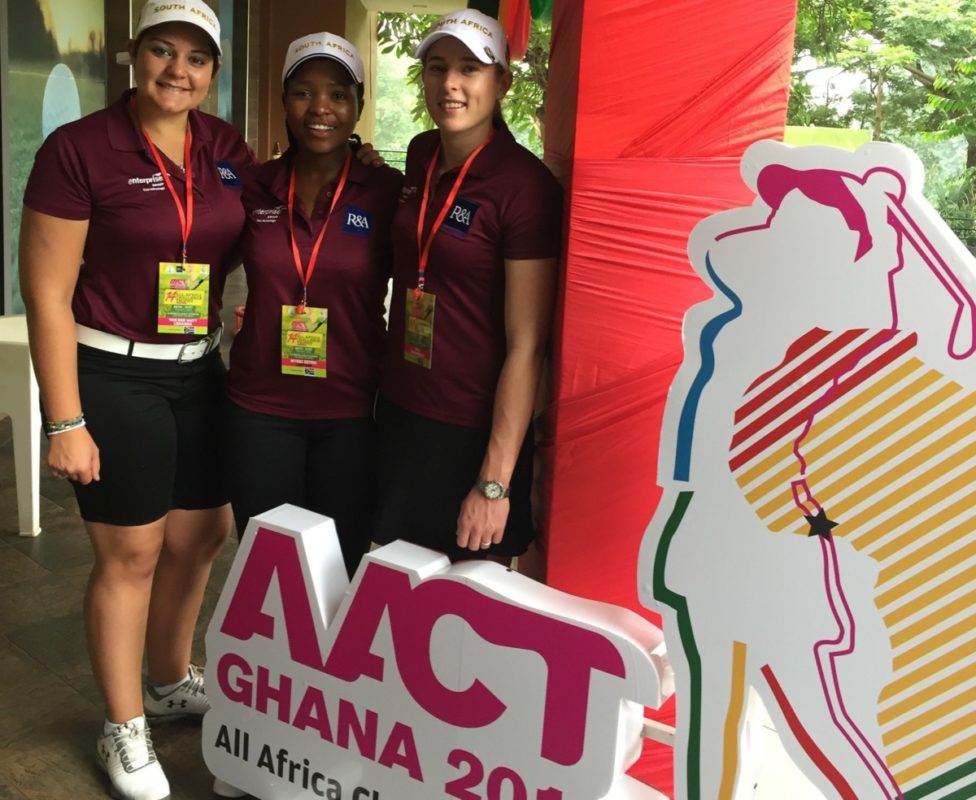 ACCRA, Ghana (31 August 2018) – Team South Africa kept the country’s title defence in the 14th All-Africa Challenge Trophy on track on a tough scoring day at the Achimota Golf Club to pull 15 shots clear of Tanzania in Accra, Ghana on Thursday.

South Africa led the first round on six-over 150 and kept control of the championship, thanks to a second successive four-over-par 76 from GolfRSA Elite Squad player Zethu Myeki and an 82 from two-time SA Long Drive champion Lenanda van der Watt.

The South African team leads the field on 308 heading into today’s final round.

Tanzania’s Madina Hussein and Hawa Wanyeche combined for 160 to edge out Kenya by one shot for second place. Uganda is fourth on 326 and Senegal will start the final round in fifth place on 335.

Myeki shot to the top of the leaderboard in the Individual Competition.

The Ernie Els and Fancourt Foundation player leads the field on eight-over 152. First round leader Hall from Ekurhuleni slipped to second on 163 after returning a non-counting 89, while Van der Walt from Gauteng North is a further shot adrift in third.

“It was a tougher scoring day for the whole field.” – GolfRSA Elite Squad player Zethu Myeki

“We had some rain and wind and a lot of tucked pins, and the thick rough really punished any wayward shots,” Myeki said.

“I started par, bogey and made the best par of my life at the third. I pushed my tee shot right and I was in the very thick rough with almost no shot. I hacked it out back into the fairway and had 108 metres to the flag. I hit it to four feet and made the putt. I was really happy with this start, because I was three-over after three holes in the first round.”

Myeki dropped a few more shots and missed a birdie chance at the par four 13th, where her first putt slipped past the hole.

“I hit a few poor tee shots, and I had to take the punishment from the rough, but I like the last four holes of the course, and I was hoping for two birdies coming home,” said the Randpark golfer.

“I lipped out for birdie at the par five 15th but I hit a great shot into the wind at the par three 16th and boxed a two-metre putt for birdie. Unfortunately I didn’t birdie the 17th after a beautiful drive down the middle, but I stuck it close at 18 to finish with a birdie. Hopefully I can keep it in play in the final round and limit the bogeys.”

“Everything went wrong on the back nine and the harder I tried, the worse things went,” said the Akasia Park golfer. “It was a day of ups and downs. The course is incredibly tight and the rough is absolutely brutal. If you go off-line just slightly, you’re looking at a bogey or double bogey. My only goal today is to try to keep it in the fairways.”