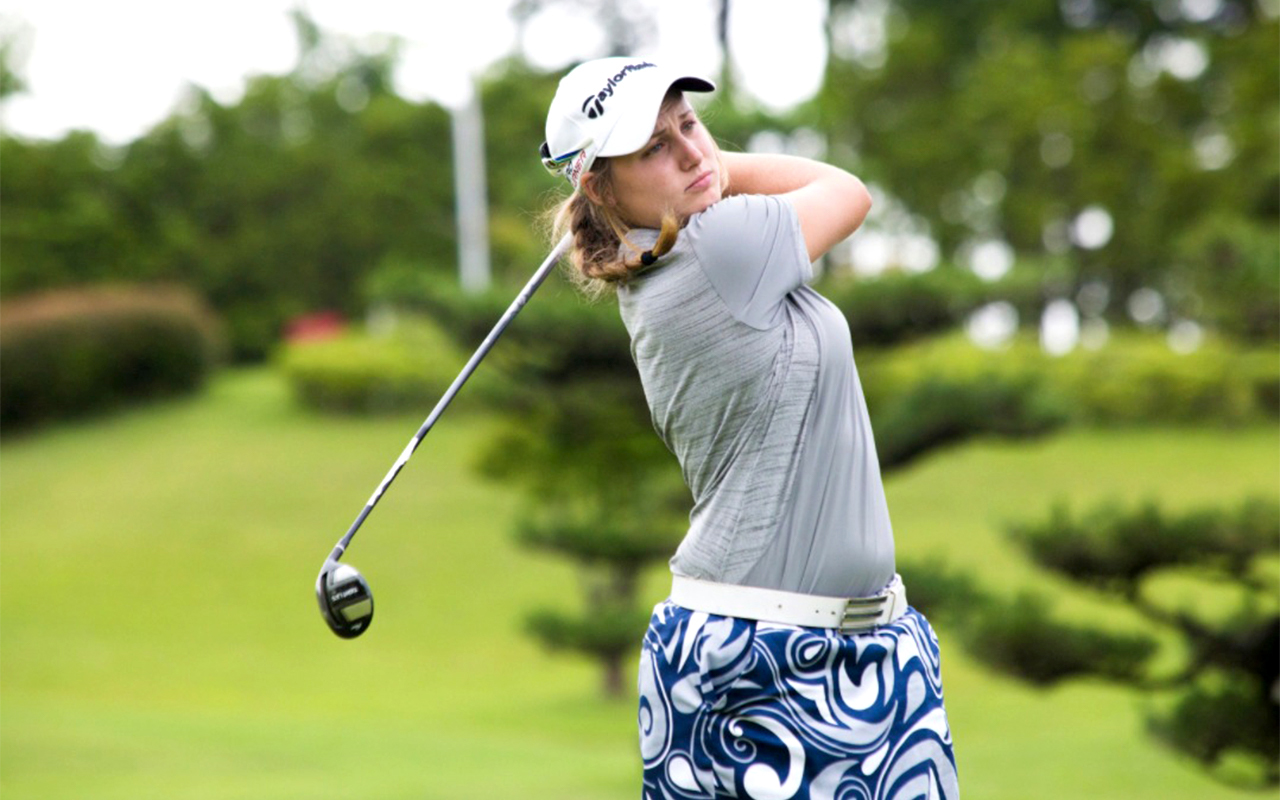 GolfRSA Elite Squad member Kaleigh Telfer made her debut in the Arnold Palmer Cup where she joined the cream of the US college crop in the Ryder Cup-style event, co-founded by the legendary Major champion and the Golf Coaches Association of America in 1997.

The invitation to compete in this prestigious event is an honour bestowed on 48 of the top ranked men and women golfers from colleges across the United States and a well-deserved nod to the Auburn University junior’s accomplishment in the 2019 / 2020 season.

Telfer not only claimed her second collegiate title in the Northrop Grumman Regional Challenge, but also enjoyed top-20 finishes in all her starts.

She tied the Auburn Tigers Women’s Golf Team lead with a 71.95 scoring average and closed out the spring season with a tie for fifth in the Lake Oconee Invitational and a top-seven finish in the Darius Rucker Intercollegiate.

The Ernie Els and Fancourt Foundation graduate also excelled in the collegiate circuit’s major events of the season with a tie for 10th in the Southeastern Conference (SEC) Championship, 17th in the NCAA Women’s South Regional and 16th in the NCAA Division 1 Women’s Championship.

In 2019, Telfer became the first South African to tee off in the historic inaugural Augusta National Women’s Amateur at Augusta, where she finished a very credible 12th in the star-studded international field. And this year, she made it all the way to the quarter-finals of the US Women’s Amateur Championship.

She capped the season two of the highest honours bestowed on US college golfers when she was named to the WGCA First Team All-American and First Team All-SEC.

The First Team All-Team SEC is selected from member institutions located primarily in the South Central and Southeastern United States, while only 11 women across the nation are named to the First All-American Team by the Women’s Golf Coaches Association (WGCA).

One of the first members of Womens Golf South Africa’s Elite Squad, Telfer had made her mark in South African amateur golf long before she headed to college in the USA.

The former SA Women’s Stroke Play champion earned national colours at junior and senior level and topped the Open Amateur and Junior Rankings in 2016. She represented South Africa in the Youth Olympics in Nanjing in 2014 and twice in the World Amateur Team Championship – Mexico in 2016 and Ireland in 2018.

Telfer gives some insights on college life, who hopes to continue inspiring the young local talent waiting in the wings.

Kaleigh, what made you choose the college route to play golf?

“It was my dream and goal since probably grade 9 to play college golf in the United States.” – GolfRSA Elite Squad member Kaleigh Telfer

It was my dream and goal since probably grade 9 to play college golf in the United States. I watched the likes of Bertine Strauss, Lara Weinstein and Lora Assad go to college and I knew I wanted to follow in their footsteps. It was really enforced when I went to the States to play the IMG Academy tournament at Torrey Pines. That was where I met the recruiters and coaches and I was recruited by several colleges.

My two criteria were good weather, because I don’t like the cold, and I wanted to study something with wildlife science. Not many colleges could offer that combination, which helped me to narrow down my choice. Auburn University offered a WildLife Enterprize Management degree and when I came over to visit, I knew it was home as soon as I set foot on the campus. There was such a great family atmosphere, and everyone was so welcoming. I have never regretted my decision.

What has been the toughest part of adjusting to college life?

The toughest part was adjusting to the very long days when I got there at the start. We begin the day at 06h00 with workouts and after that it is go-go-go with classes and practice until dinner and then we still have tutoring. With everything you have to do, your day ends around 20h00 and then you still have to study and do homework. But now I really enjoy structure. It’s funny how I miss having a scheduled life when I come home. And the awesome practice facilities at Auburn.

What do you miss most about being home in South Africa?

“The biggest thing I miss is a good old South African braai.” – Telfer reveals what she misses most about being in South Africa.

Definitely our braais. Yes, of course I miss my family and friends, but the biggest thing I miss is a good old South African braai.

What are your college career highlights to date?

I would say the biggest highlight was getting into the final four with my team in the NCAA Division 1 Women’s Championship. It was a long hard haul. We had to contend with rain delays throughout the week, but we worked really hard as a team and it was a huge honour for us to finish top four.

Another highlight was doing well in the Augusta National Women’s Amateur and of course, being named WGCA First Team All-American. To be named to the top 11 golfers in the whole of US College golf was an incredible honour and achievement.

When I graduate next year, I plan to go to the LPGA Qualifying School. It would be great to get on to the LPGA Tour first off, but going through the Symetra Tour is also a good option. Ending up competing on the LPGA Tour is the ultimate goal.

What advice would you share with young golfers who are looking to follow your path of going to college to pursue a professional career in the sport?

College life is not for everyone….Some golfers prefer to stay in the amateur ranks, others turn professional immediately. At the end of the day, it’s a personal choice. Just make sure you decide around Grade 9, so you can make sure that you select the right subjects to be eligible for a scholarship.