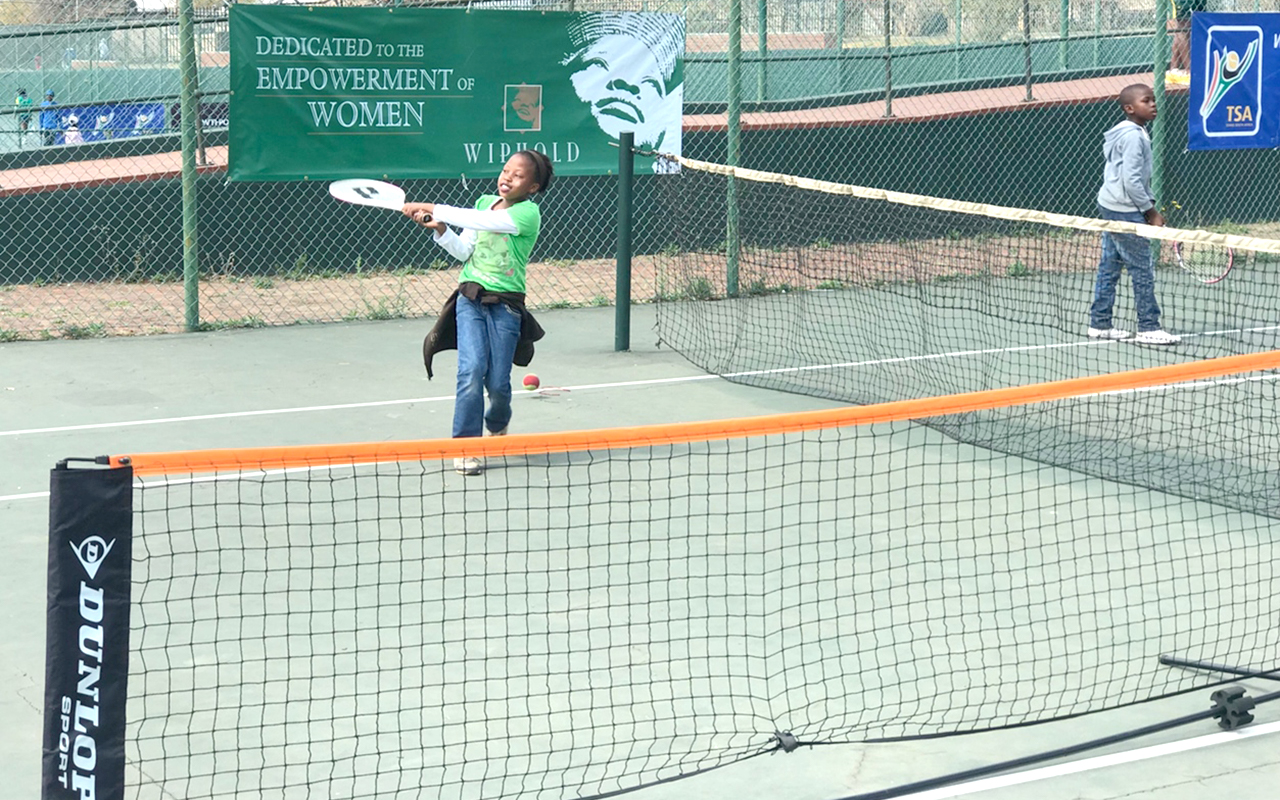 More than 100 young tennis players from two recently launched Growth Point centres took to the tennis courts in celebration of Women’s month at Arthur Ashe Tennis Centre in Jabavu, Soweto on Saturday in an effort to promote women’s tennis and increase participation among young female players across the country.

The celebration which saw participants from Mpho Makhoba Tennis Precinct in Atteridgeville and Arthur Ashe Centre in Soweto forms part of Tennis South Africa (TSA)’s commitment to continue its development of women.

The aim of the event was to celebrate women through laughter and entertainment, not to conform to the formal ways of tennis. Male players wore make-up and skirts on the day in support of women.

11-year-old Phenyo Golele from Atteridgeville could not contain her excitement about the event saying it was great seeing boys dressed like women and supporting them, “August is a special month as it celebrates women and today it so fun seeing boys wearing skirts and playing with us instead of bullying us”.

The event spearheaded by TSA Development Manager Mpho Makhoba and Tournament Manager Ephraim Motsiane with support from regional coaches included mini tennis and junior’s mixed doubles competition. The morning culminated in a fabulous fun aerobics session run by Hope Mogaki with players of all ages all on court together.

Makhoba said the aim of the event was to educate their players the importance of celebrating women and to give players of varying tennis skill levels the chance to be competitive.

“The purpose of the event besides celebrating women’s month, is to teach our boy child to respect females in general. Most of our kids goes missing and some are exposed to drugs as a result we are teaching them that through sports you can break barriers and you can become a better person,” commented Makhoba.

“The aim of our development centres is to take children out of the streets and put them in a sports field. What I like the most about tennis is that it is a gentlemen sport and it teaches you to be discipline. Our boys were all dressed in skirts in support of our ladies,” added Makhoba.

Makhoba started as a tennis player and later became an official. Her love for the game has enabled her to create a successful career out of the sport. She is the first female tennis technical official in Africa to have been awarded the coveted ITF Silver Badge.

Photo 2 Caption: Tennis players of all ages all on court together enjoying a fabulous fun aerobics session run by Hope Mogaki in celebration of women’s month at Arthur Ashe Tennis Centre in Jabavu, Soweto on Saturday. Photo: BLD Communications

South Africa’s leading women’s player Chanel Simmonds battled through to the quarter-final round in over two and a half hours at the Ilana Kloss International (Women’s $25,000 ITF World Tour)...