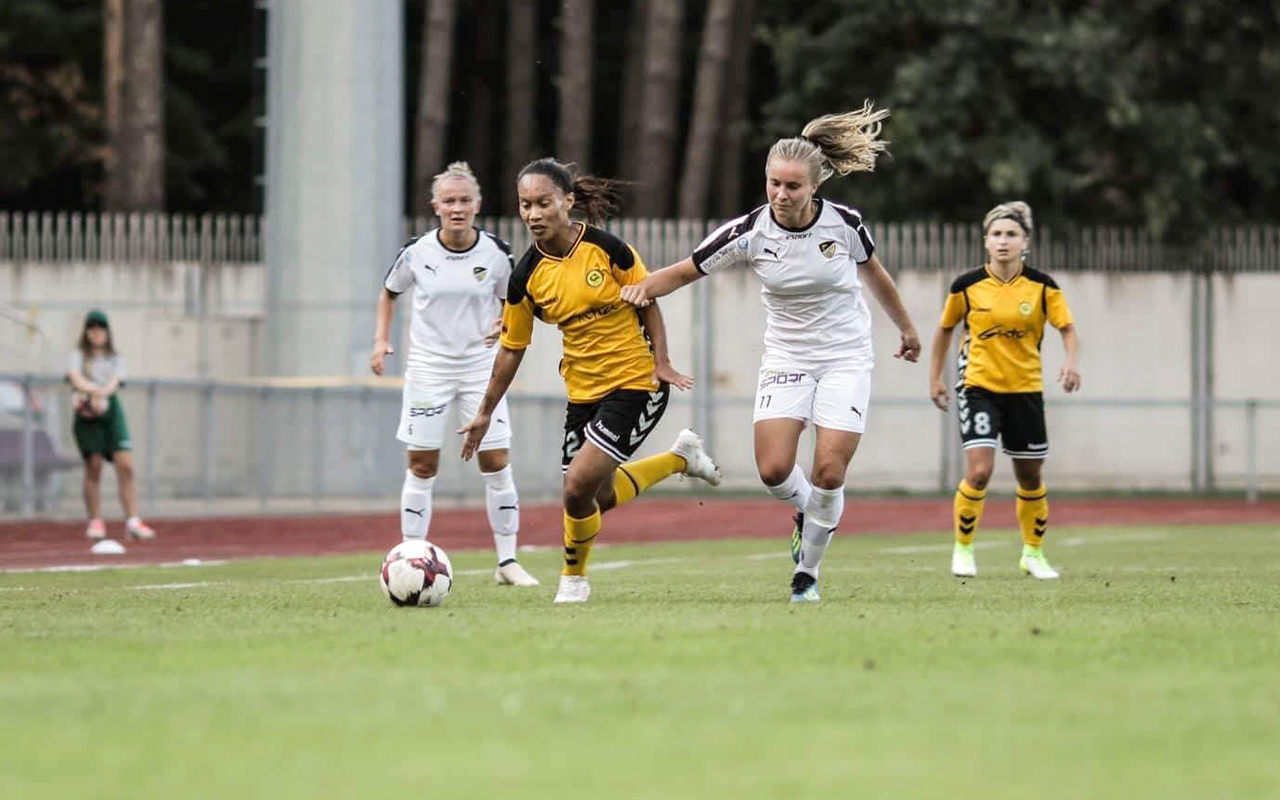 My name is Leandra Smeda and I fell in love with football when I bribed my older brother to play street football with him and his friends. I was 10yrs old. I still remember that day very well. They needed a ball and I had a netball ball. I told my brother they can use my ball only if I can play with them. Ever since then, I was hooked to the beautiful game.

I grew up in a sport loving family. Both my parents and my brothers played sport. – Banyana Banyana and International footballer Leandra Smeda

I grew up watching my father play football and rugby. I watched him play football on Sundays. My mother played Netball and she was really good. She taught me how to play netball at the age of six. I even played the same position she played up until I finished high school. I played as a goal attacker.

I decided to take Football seriously when I got my first call up to the national team in 2010 after I got spotted at the 2009 USSA club champs in Mafikeng. Growing up, it was never a dream for me to play professional football or even for the national team. I just participated in different sporting codes because I loved sport, especially Football.

My first real taste of women’s football at a recognisable level taught me that there is still room for improvement in my game and growth as a player. – Leandra Smeda

I am grateful for Sasol and the Sasol League because they have given me and many other girls a platform to showcase our talent and compete competitively locally and at international level through their sponsorship of the women’s national team.

The #Limitless Campaign by Sasol is a great initiative to put the spotlight on women’s football. It also encourages young girls not to limit themselves and to follow their dreams because we all can become whatever it is we want in life.

We are thankful to SAFA for starting to pay closer attention to the women’s game. My wish is that the professional women’s league will kick off next year as planned and that more sponsors can come on board in support of the women’s game. We’re always fighting against the perception but it’s slowly changing. It will change. I believe that. We need to keep working hard at it.

My time in Lithuania has been great. – Leandra Smeda

The only struggle is the language barrier but it’s has got better from when I first got here and of course playing in the women’s champions league has been the highlight for me here.

My advice to young footballers who want to break onto the global scene is to work hard, stay disciplined and believe in themselves. Try and find a good balance between football and your studies because there is still life after football.

My greatest ambition is to play at the next FIFA Women’s World Cup and complete my Master’s degree in Food Technology.

Photo 1 caption: Banyana Banyana and international professional footballer Leandra Smeda charts her path back to the day she negotiated her inclusion in a street football match with her brother, when he and his friends needed her netball ball to play. Photo: Supplied

Photo 2 caption: Living today’s life as an international female footballer to the fullest, Leandra Smeda’s advice to others is that there is a life after competition – even for the top-flight athletes, and she’s making sure of her future career by completing her Master’s degree in Food Technology at the same time. Photo: Supplied

Photo 3 caption: Smeda is quick to acknowledge the key inputs of SAFA and national women’s football sponsor Sasol, who put her on a platform to be signed by Lithuanian university team Gintra Universitetas. Photo: Supplied

Photo 4 caption: Smeda plays in a no.22 Jersey for FC Gintra, a women’s football club from Šiauliai which participates in UEFA Women’s Championship League, where the South African midfielder has already scored a goal in her three appearances for the local Šiauliai University team. Photo: Supplied

Photo 5 caption: Smeda finds meaning in the #Limitless Campaign by national women’s football sponsor Sasol: “It is a great initiative to put the spotlight on women’s football. It also encourages young girls not to limit themselves, and to follow their dreams because we all can become whatever it is we want, in life.” Photo: Supplied