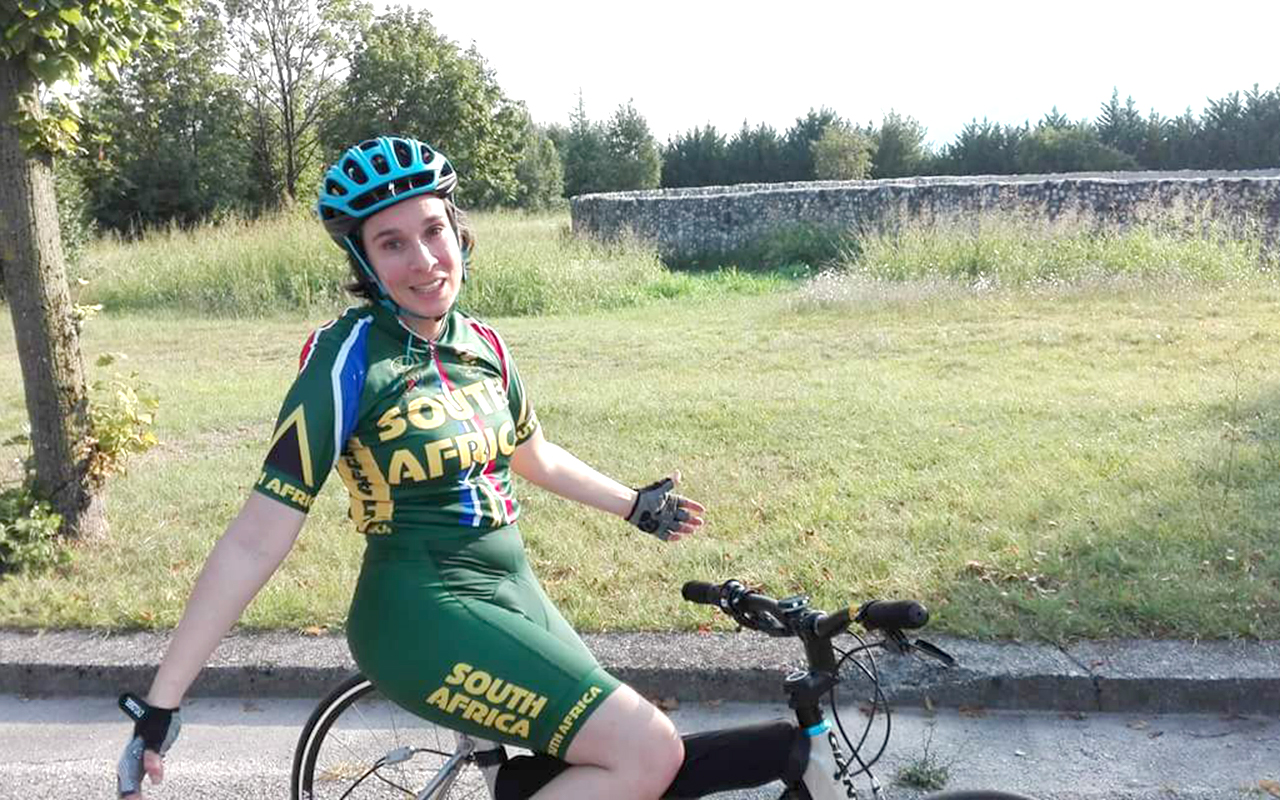 Toni Mould: This Para-Cyclist an Inspiration to the Nation

My name is Toni Mould, and I am a South African para-cyclist.

I started para-cycling in 2015, when I took part in my first South African Cycling Championships.  Since then I have competed in four National Championships and winning eight national titles.

I have also competed in two World Cups that were held in South Africa during 2015 and 2016.

In 2016 I won the overall World Cup for the T1 class, and 2017 saw me win my first international medal at World Championships, in Pietermarizburg.

Bridging Abilities offers sports and recreation day functions for the children, and they participate in activities such as sitting volley ball, blind futsal, boccia (a game similar to bowls specifically designed for athletes with a disability affecting locomotor function such as cerebral palsy) and various recreational games such as fun relays are played during the course of the day.

A lunch pack is given to each participant before they leave to go home.

With sports days and camps for children with disabilities being rare within the South African communities, these events serve as a means for the organisers to get to know the individuals and communities they aim to serve, in order to build a relationship with them, and gain their trust.

The organisers invite a range of contributions, from sponsoring a child, to donating clothes  and equipment, to offering voluntary services to the campaign, while commercial sponsors are invited to join the existing social investments made by the National Lotteries Commission, MSB Sportswear, Cape Union Mart, The Rachel Swart Fund, NWE Consulting Engineers and Tsitsikamma Crystals.

Read on to learn a little more about Toni Mould:

I am passionate about sport because…

I have always had a passion for sports but never had the opportunities or time to participate.  I love being active, challenging myself and believe the participating in sports has many physical, emotional, and social benefits.

I see my disability as…

A daily challenge.  I have Cerebral Palsy which affects all my muscle movements including my coordination, balance and speech.  Basically everything I do is affected by my disability.  I am a very determined person and have learnt to just persevere through my challenges.

My career highlights so far have been…

My cycling career highlights so far are definitely winning a silver medal at last year’s World Championships and going to cycle in Italy.

That as a para athlete you need a good team of people around you and that there is not much support for para athletes in South Africa.

I am a Sponsor’s dream because…

I am the only senior woman competing on a tricycle in SA at the moment and probably also in the rest of Africa.  I am also well-known in my cycles and even beyond.

I have high morals, am very determined, fun loving and honest.

I also believe in giving back into society, an example being the Non-Profit Company, Bridging Abilities that I started and have run for nine years.  I am starting to get into the public speaking arena.

If a sponsor came on board, they could assist me…

financially by helping me to get to competitions that are held in Europe and Canada next year.  Or by giving me products that I could use such as equipment, gear, or nutrition products.  Media sponsors can help me to spread my story.

My hope for women’s sport is…

That it will get the same financial backing, exposure and sponsorships as the men.

My advice to women in sport is…

Stick with it.  If it is your passion and you enjoy it, don’t let anyone tell you that you cant.

My greatest ambition is…

Photo 2 caption: As a solidarity with her display of sporting fortitude in the face of daunting adversary, and probably also in recognition of the remarkable personal contributions she makes to the community, Mould is gaining a lot of media coverage of her accomplishments. Photo: Supplied

In 2013 I was introduced by a friend who was at that time representing South Africa in para-cycling. After starting to compete in races at local level those around me saw my passion and potential and encouraged me to consider competing at national level but I needed a competitive tricycle. After eighteen months I received my new trike and I entered the South African National Time Trial and Road Race Championships. After winning two gold medals at those Championships I was included in the South African team for the World Cup later that year. In the four years that I have been competing on international level I have participated in two World Cups and two World Championships. In 2016 I won the overall World Cup in my class and in 2017 I won a silver medal at the World Championships. In 2018 I went to my first overseas competition and took part in the World Championships in Italy. This year I have been included in the SA team that will go to the World Cups in Italy and Belgium during the month of May. I am the only T1 cyclist in South Africa and am in need of sponsors.