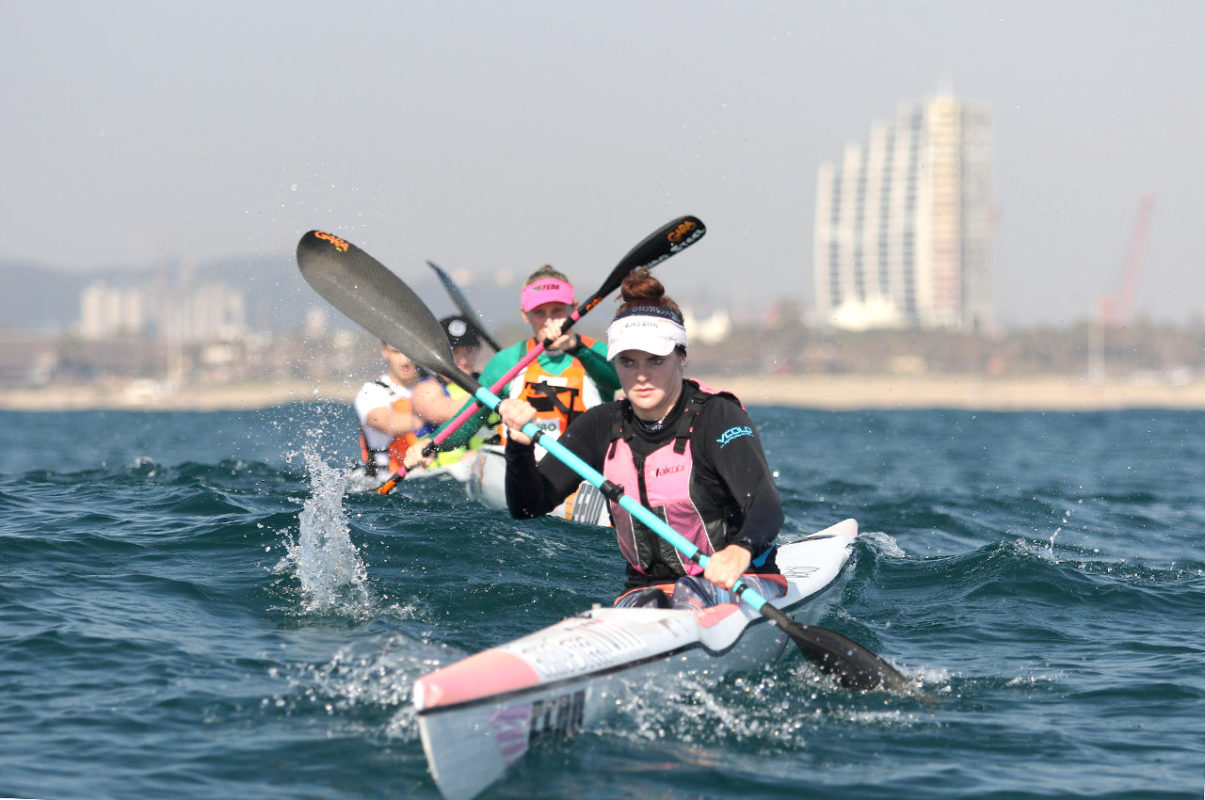 Twists and Turns as Team Event Wraps up Surfski Series

The curtain came down on the well-supported Bay Union Open Ocean Surfski Challenge on Sunday morning with change the order of the day as the annual JD Sebenza Geriatskis relay race was decided at the Durban Undersea Club.

With paddlers getting the option of racing in one of three team options – two single skis, two double skis or a single and double ski team – the elite paddlers were spread across a variety of contests on the day.

The potent combination of Stewart Little, Caitlin Mackenzie and Cameron Hudson took the honours in the single ski/double ski competition ahead of the team of Grant Smith, Nicholas Horn and Gavin Searle.

The women’s race also proved to be an interesting outing for the pre-race favourites Jenna Ward and Kyeta Purchase. With their main focus being on their K2 challenge at the World Marathon Championships in China in October, the Sunday morning series has been a key part of their base training phase.

Purchase: Every Training Mile Counts for K2 Challenge in October

“We wanted to get in twenty kilometres training today and we landed up getting 23,5 kilometres done, so that my marathon done for today,” said Purchase. “As the race ended up being longer than advertised due to the confusion of the siting of the turning buoy.

“It was more that we were expecting but in this training phase every mile counts. Paddling in the sea just makes you fitter and stronger,” she concluded.

“It was such a fun format and to do a relay race like this to end the series was cool,” said Ward. “As the Euro Steel duo once again ended up testing themselves against some of the elite men’s crews.

“Kyeta and I got onto the water before the race and did ten kilometres, and when we realised the race was turning out to be longer than we expected, it was more than we bargained for but it was good training,” she added.

The K2 partners will have to do battle against each other in the upcoming Bay Union King of the Bay next weekend and the Gara Dolphin Coast Challenge as both are single ski format races, before they turn their attention as a unit to the Hansa Fish in September that will decide the SA K2 titles.

The short course honours fell to the double ski team of Alice Edward/Paige Horn, while the SUP laurels went to the trio of Jaqueline Lecourt De Billot, Matthew Swemmer and Lande Williamson.