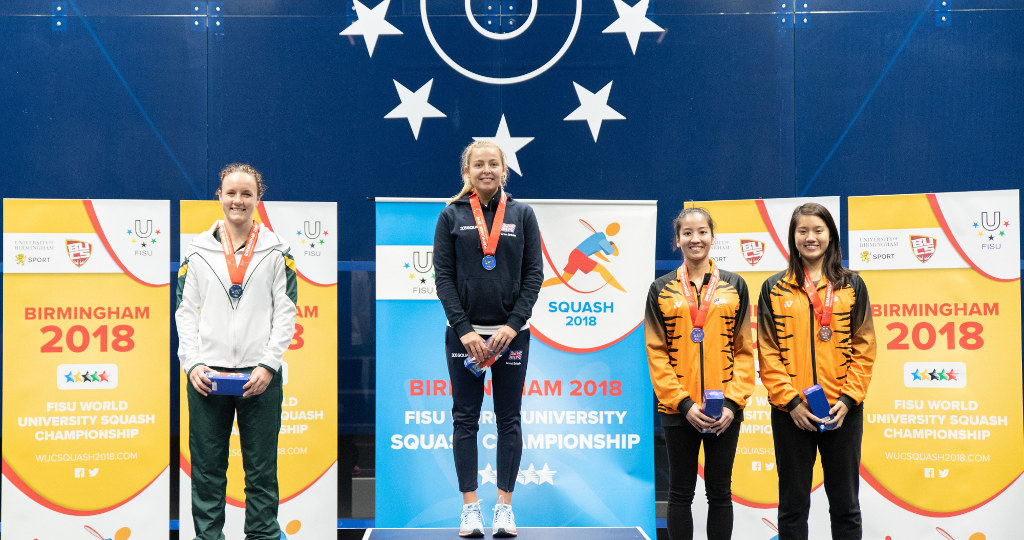 The 24-year-old UJ player produced one of the best performances by a South African at the tournament, played in Birmingham, England, when she qualified for the final.

There she came up against England’s Lily Taylor and went down in straight games, but acknowledged it was another massive learning experience in her squash career.

“I did not do too well when I last played in this event in 2016, losing in the first round, and this time I targeted a spot in the top eight, at the least,” said Pienaar.

“I was extremely pleased when I won my semifinal match [against Zoe Foo of Malaysia] and suddenly realised that I was through to the final.

“It was all a little overwhelming and happened so fast to be honest, but it was amazing nevertheless.” – World University Squash Champs silver medalist Alexa Pienaar

Having beaten top seed Grace Gear in the earlier rounds, Pienaar faced another English player in the final.

She admitted she felt the pressure of such a big occasion.

“I knew everyone from home was watching my match [on live streaming], not to mention the crowd,” said this year’s University Sport SA champion.

“My opponent seemed to just have the edge, mentally and physically. I was a little hesitant and it took a toll on my confidence.

“I feel that I could have played better, but she was obviously the better player on the day. I was a little disappointed in not being able to keep the intensity and level of focus that I had up until that point, but I was still happy to have made it so far.”

Pienaar said the competition at the Worlds was always strong, with several players ranked in the top 100.

“That is quite incredible considering that we are all students and do not have the time to travel abroad and play many of the international tournaments.

“I am certain that many of these players will reach the top 50 in the world sooner rather than later.” – Alexa Pienaar

While pleased with her success on the court, Pienaar said she had a goose-bump moment off the court.

“The tournament was very well organised and the facilities were amazing.

“But the definite highlights for me were carrying the South African flag at the opening ceremony as well as standing on the podium while the national flags were hoisted.

“That was a really special memory.”

In the team event South Africa ended sixth, having only lost to Great Britain in the pool stages. They went down to the Czech Republic in the fifth-place playoff.