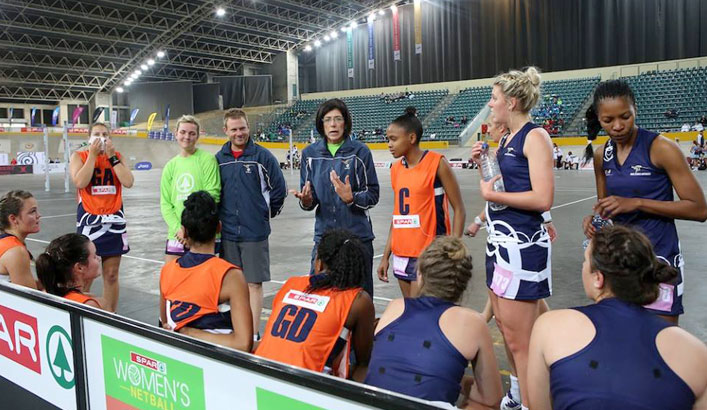 The youngsters from Dr Kenneth Kaunda (North West South) brought star-studded Gauteng North up short on Wednesday when they beat the tournament favourites 56-45 at the SPAR National Championships at the Bellville Velodrome.

(Scroll down for Days 1, 2 and 3 Results at the 2014 SPAR National Championships, or click here to read the Day 2 tournament wrap)

The North West side is now the only unbeaten team in the A division.

Dr Kenneth Kaunda took the lead from the start and never relinquished it. Chante Steyn had an outstanding game as goal-shooter, and was the rock around which the team built its success, while at the other end, Kifiloe “Fifi” Tsotetsi gave her Protea teammates, Melissa Myburgh and Lenize Potgieter a hard time.

At halftime, Dr Kenneth Kaunda were 27-22 ahead, but in the third quarter, they stretched the lead to as much as 11 goals.

Gauteng North, boasting six current and former Proteas in their line-up, fought hard to come back, reducing the deficit to four goals at one stage, but the young players kept their composure, and in the final quarter they raced ahead of the more experienced team.

“It was all about the team and the team effort,” said Kenneth Kaunda coach Dorette Badenhorst. “Our shooting was excellent and we were able to control possession. We knew Gauteng North were an excellent team, but we put them under pressure and we capitalised on their errors.

“Having Chante under the posts gave our goal attack, Elsunet du Plessis, the confidence to shoot knowing that Chante was there for the rebound.

“My team are there for each other, and to make each other look good on court,” said Badenhorst.

Gauteng North coach Jenny van Dyk was philosophical about the defeat. “It was a good wake-up call for us,” she said. “Rather lose now than in the final.”

“They wanted it more and we lacked energy and intensity. If we had played the way we played this morning, when we played Boland, we would have beaten them.”

Mangaung beat Western Province 47-38, and Nelson Mandela Bay 51-38, but looked far from the all-conquering side they were a year ago. Nelson Mandela Bay also lost to their neighbours, Buffalo City, who beat them 38-36. They have yet to win a match.

Photo 1 caption: Nelson Mandela Bay are yet to record a win in the 2014 SPAR National Netball Championship, losing 51-38 to Mangaung Metro (pictured) in their second fixture on Wednesday at the Bellville Velodrome in Cape Town, on August 13, 2014. Photo: Reg Caldecott

Photo 2 caption: Ruzel Vorster in action for Dr Kenneth Kaunda, the tournament’s only unbeaten team in the 2014 edition of the national inter-provincial tournament, in action against Gauteng West on Wednesday. The North West beat the Highveld team 72-28. Photo: Reg Caldecott

Photo 3 caption: Lentsa Motau of Dr Kenneth Kaunda (right) and Bibalwa Sizani of Gauteng West compete for the ball during day 3 of the Spar National Netball Championships at Bellville Velodrome on August 13, 2014 in Cape Town.