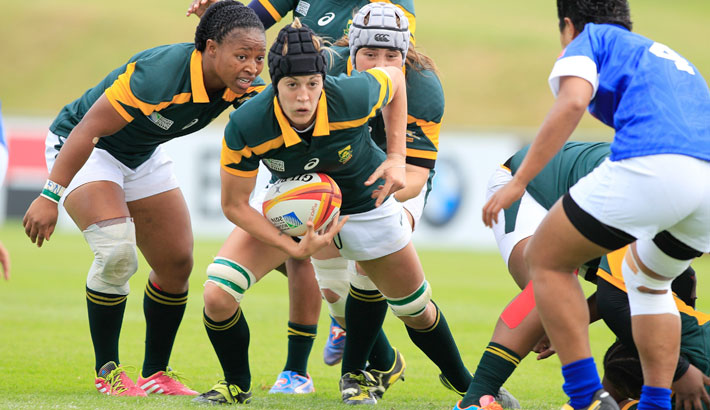 The Springbok Women on Wednesday delivered a spirited performance against Samoa in Marcoussis to secure a nail-biting 25-24 victory in their penultimate Women’s Rugby World Cup clash.

The victory, which marked their first of the tournament, ensures that the team will have a shot at securing their best finish yet in the tournament, as it earned them a place in the ninth/tenth place playoff on the final day’s play on Sunday. The team’s best finish in the Women’s Rugby World Cup up to now is 10th position.

The first half proved to be a ping pong battle between the teams, as South Africa allowed Samoa to bounce back immediately after they scored points throughout the half. But they maintained their composure in a tense second half to secure the narrow victory.

South Africa got off to a firing start with flyhalf Zandile Nojoko scoring a try in the 50th second after flank Rachelle Geldenhuys charged down a ball in Samoa’s half and made a few yards before passing to Nojoko, who touched down for the team’s first try of the tournament and a 7-0 lead.

But they allowed Samoa to hit back immediately after through flyhalf Bella Milo, who finished off a well-worked team try as they opted for pick-and-go’s to force their way into South Africa’s 22.

Springbok Women’s captain and centre Zenay Jordaan, however, edged her team back into the lead with a penalty in the 14th minute.

This, however, was short-lived as Samoa put in a big hit on defence from the kick-off, which dislodged the ball from flank Shona-Leah Weston’s hands and Samoa pounced on it to cross the tryline for the second time for a 14-10 lead.

SA again managed to string together phases on attack in the exchanges that followed and earned a ruck penalty, which Jordaan slotted over to reduce the deficit to only one point.

South Africa built on this in the 31st minute by scoring their second try from a solid lineout, which Geldenhuys capitalised on with her brute force to power her way over the tryline. This pushed SA 20-14 ahead on the scoreboard.

The Ping-Pong battle, however, continued, as Milo caught the South African defence off-guard to cross the chalk for their third try of the match and a 21-20 lead, which the teams maintained until half time.

The Springbok Women were dealt a big blow shortly after the break as lock Celeste Adonis received a yellow card for infringing at a ruck, and Samoa again converted the opportunity into points with Milo slotting over a penalty, which pushed them 24-20 ahead.

Despite this South Africa remained positive and retained possession which allowed them to camp in Samoa’s half for most of the half. Their attacking efforts finally paid off in the 59th minute as replacement wing Veroeshka Grain received the ball out wide and ran around a few defenders to score their third try of the match. This placed South Africa 25-24 ahead.

The final quarter was a tense as both teams gave everything on attack and defence, which resulted in a stop-start affair. But SA absorbed the pressure well to hold on for the one-point victory.

Photo 1 caption: South Africa launch another attack against Samoa during their narrow 25-24 win, for their first tournament victory at the IRB Women’s Rugby World Cup 2014 at the French Rugby Federation in Marcoussis on Wednesday, 13 August, 2014. Photo: C. Glemet/IRB

Photo 2 caption: Samoa scrum half Tulua Leuluaialii gets the ball away at the base of a ruck against South Africa, at the IRB Women’s Rugby World Cup 2014 on Wednesday, 13 August, 2014. Photo: C. Glemet/IRB