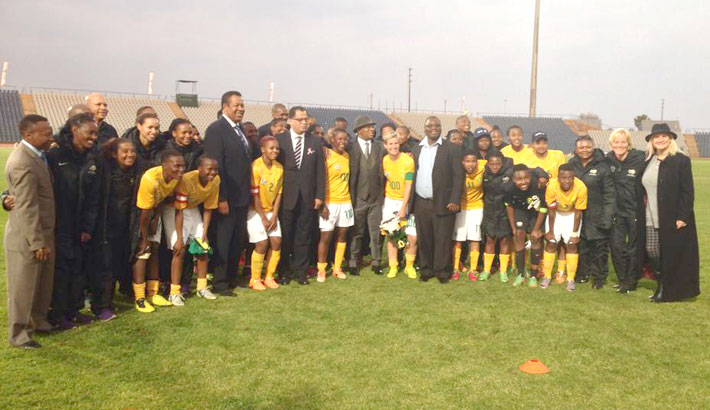 Prior to the start of the match, Khune tweeted his support for Banyana Banyana captain Janine van Wyk, who was playing in her 100th match. Veteran striker Portia Modise was celebrating her 110th appearance for South Africa.

Banyana Banyana took the lead early in the first half as Amanda Dlamini slotted home a well-executed goal three minutes into the game. She took advantage of an interception from just outside the box, putting through the opening goal of the match.

Sasol Banyana Banyana enjoyed most of the ball possession in the first half, forcing the Namibian goalkeeper to make a save in the 35th minute. Nothando Vilakazi’s shot from just outside the box hit the cross-bar in the 39th minute.

The tempo of the match started a bit slow in the second half.

Leandra Smeda extended Sasol Banyana Banyana’s lead in the second half after Portia Modise beat the keeper before playing a pass to Smeda, who was unmarked inside the box.

Sasol Banyana Banyana continued pilling pressure on the Brave Warriors in the bid to get more goals, but the match ended with the score line at 2-0.

Banyana Banyana are preparing for the 9th edition of the African Women’s Championship which will be hosted in Namibia from 11-25 October. They will continue playing international friendly matches in August ahead of the tournament.

Photo 1 caption: Dignatories and celebreties galore were on hand to congratulate Banyana Banyana on their second straight win, in international friendlies against neighbour Namibia, at the Dobsonville Stadium on Sunday, 10 August, 2014. Photo: Banyana Banyana on Facebook