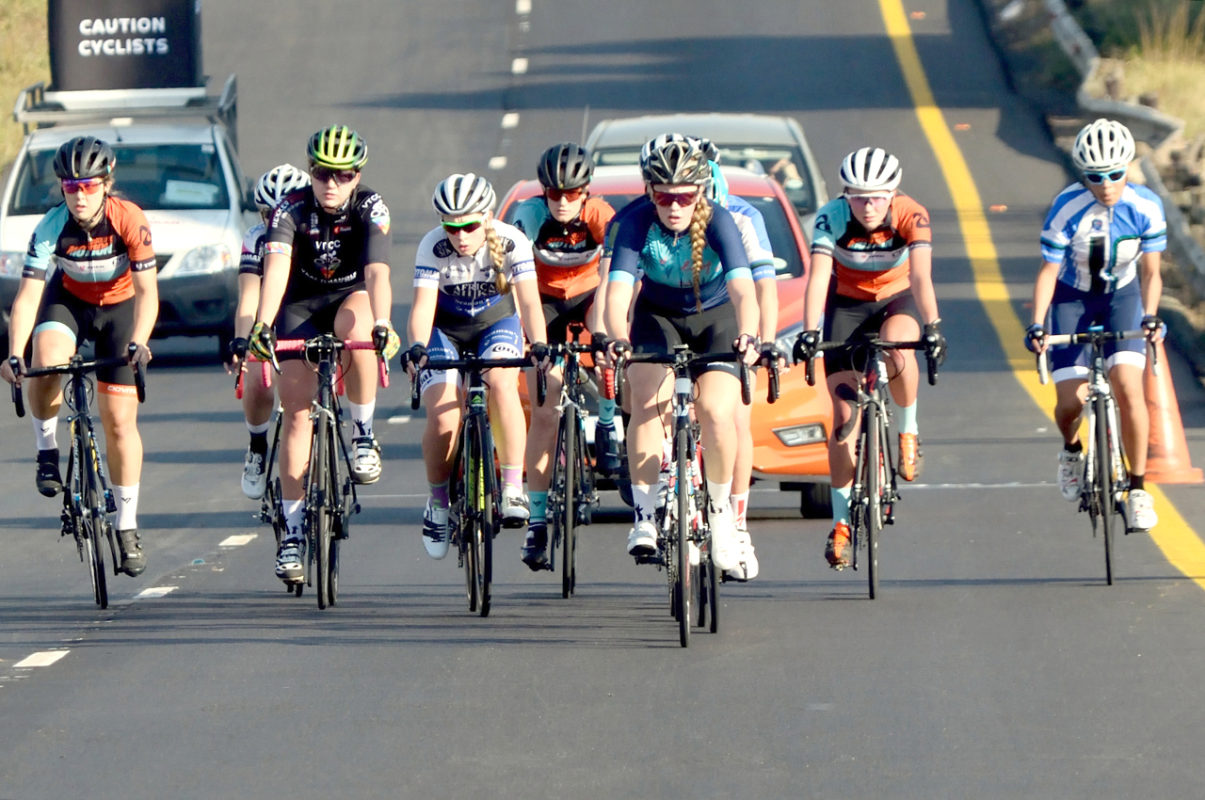 KZN’s Frances Janse van Rensburg doubled up when she won the U19 girls road race, on the second day of the SA Youth Road Cycling Championships in Westville, KwaZulu-Natal, on Sunday.

A Weekend of Double Wins in All Age Groups

Sunday’s win was her second national title of the weekend, after she won the girls’ U19 time trials on Saturday in Camperdown, and like her, the winners of the U17 road racing title, Chante Olivier, and the U15 and U13 titles, claimed by sisters Kita and Kyla Uys respectively, also claimed their double win in Westville on Sunday.

Janse van Rensburg was the dominant rider in the girls U19 race and so it was no surprise when she went on a long solo break and then put her head down to hold off the chasers for just less than half of the 80km race.

She ended up winning by 33 seconds from Kelsey Jade van Schoor – who has now finished second in both the time trial and road race for two years in a row – and Jone van Eeden, who was five minutes further back.

On the long climb near the end of the second of five laps, Van Rensburg put in a testing surge to see how strong her rivals were, and banked the information until a lap later when she launched a full-blown attack up the same three kilometre climb.

“I attacked on the big climb on the third lap and pulled a gap, and then just kept it from there to the finish.” – SA 2019 Road Race U19 Champion Frances Janse van Rensburg

Nobody was able to stay with her this time, and from there it was a case of using her time-trial skills to keep the rest of the field at bay.

“I am so broken now – that was one of the hardest races of my life,” said an exhausted Janse van Resnburg after the finish. “I am very happy that I could pull it off today. The final two laps was the deepest I have ever had to dig in my life.

Saturday’s U17 champion Chante Olivier had a closer finish when she beat off a determined charge by Caitlin Thompson (1 second off the pace) and Saturday’s silver medallist Chloe Bateson (2 seconds off Olivier) to claim her second national jersey on the weekend.

But Janse van Rensburg and Oliver were not the only riders to collect two gold medals over the weekend, there was one family that was particularly pleased with a haul of four gold medals!

Saturday winners Kita (U15) and Kyla (U13) both completed a perfect weekend for the Uys family as they added the respective girls’ road race titles to the equivalent time trial victories earned on Saturday.