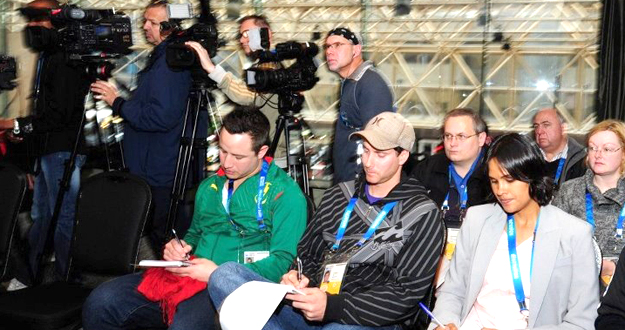 If we are talking ground breakers in South African sports media, then Zeena Isaac is right up there with the best of them. When Isaacs talks rugby, people sit up and listen. She has an enviable knowledge of the game, and her ability to read key situations, both on- and off the field, has seen her rise to become one of South Africa’s top rugby commentators.

Reflecting on her entry into the industry, Isaacs, who studied journalism, says: “It was a lucky break, I suppose …

“I played sport and started working at a magazine called Engineering News after I completed my degree. A year later, a colleague told me to apply for the rugby correspondent job at the Business Day newspaper, and I got the job!

“Soon after SABC approached me to do a television magazine programme called Rugga Zone, and then I joined SAFM as a rugby commentator. And since they all complimented one another, I was lucky enough to do all three jobs at the same time. So I am pretty blessed.

Rugby is a tough environment for anybody. Throw a woman in the mix, and the things can get a whole lot tougher. Isaacs admits most people were initially surprised, and many questioned her knowledge of the sport, being a female.

“But once they heard that I had played touch rugby and rugby, and after reading my articles, their views changed. In fact it didn’t take long to build a great relationship with the players, coaches, administrators and the journalists after I started covering the sport.

“With regard to the readers, I cannot recall a negative response to my articles and analysis, which was pretty encouraging.”

Isaacs is a busy body, with an established presence across the media space. Previously with SABC Sport, and having worked on major international sports broadcasts, she recently joined pay channel SuperSport, where she is hoping to make a name for herself as a presenter.

Isaacs commentates on radio for SAFM and writes for a host of publications, including a new sports newspaper called Inside Sport Africa. She also does PR for sports agency Matchworld.

“I have always enjoyed watching sport and I have been pretty sporty since primary school, so it has always been a strong passion.

“In fact, when I was young, my family always used to gather in the lounge for big sport events, and that contributed immensely to my love for sport. But I was also fairly active as a youngster and I loved the outdoors, so I played a range of sports including golf, touch rugby, rugby and soccer.”

Unfortunately, she tore knee ligaments playing in a rugby match a few years ago, and as a result, she cannot participate in any sports that require “change of direction”, until she has a knee operation.

“So I had to give up all sports except for golf and running. Fortunately, I enjoy both sports thoroughly, so it helps me keep fit. As a substitute for the other sports though I have been training pretty hard in the gym and I am really enjoying the weight training in particular.”

While she played a host of sports growing up, it was rugby that caught her eye. Isaacs says she was attracted to the sport by the passion and commitment shown by the players.

“It was amazing to see how they could give everything within themselves for 80 minutes,” recalls Isaacs. “I also enjoyed the physicality of the sport. Unlike in some sporting codes where players pretend to be injured, that seldom happens in rugby. If someone falls to the ground in pain, it generally is a genuine injury. So although it is rough, it is an appealing sport.”

Having worked her way through the ranks, Isaacs’ career hit some high ground, and she fondly recounts some of her favourite career highlights.

“The last two Rugby World Cups in France and New Zealand have undoubtedly stood out as the best moments in my career. I covered both World Cups for the SABC, and what encouraged me the most was that they supported me to do the job to best of my ability.

“The other highlights include the first Springbok Test at Soccer City, and the Bulls’ Super Rugby semi-final and final at Orlando Stadium. The nation-building aspect at those matches was phenomenal, because all races and age groups united in support of the Bulls and Springboks. It was similar that after the Springboks won the 1995 Rugby World Cup.”

She says her passion for rugby and her willingness to accept new challenges have paved the way to where she is today. “If I had not been open to the idea of doing television and radio, over and above my writing, I probably would have slipped into a comfort zone and stagnated.

“I also believe in learning as much as possible from one’s experiences and from those around you, so I don’t think I will ever stop learning. Frankly I think the more one is willing to learn, the further you will go in life.

While Isaacs excels in the rugby media space, she is quick to point out that it is still a growth area for women.

“There have been three or four women who have taken up rugby writing, but none of them have really made it into the national magazines and newspapers, which is sad,” muses Isaacs. “And with regards to broadcasting, there is one other woman in television and one in radio.

“So there is still a long way to go for the sport to compete with cricket and soccer in terms of female presence. Hopefully that will change in the next few years, because I believe there are women capable of reaching the top with their vast rugby knowledge, I suppose they just need a chance.”

But Isaacs urges media hopefuls not to throw in the towel to easily. “Follow you dream and never give up!

“As a woman one has to put in extra effort constantly to reach the top, and unfortunately it doesn’t always work out. The other challenge is that at first you will have to prove yourself, especially since rugby is a male-dominated sport. But that said, the rewards are worth the effort.”

It is clear that Isaacs set out from the beginning to excel in this space. Early on, she identified top journalists, and learned from them. Isaacs says when she took up journalism, she looked up to former Sunday Times journalists Simnikiwe Xabanisa and Clinton van den Berg, and former Rapport writer Hennie Brandt.

“Sim is the only one still in journalism, but nevertheless, I learned a lot from them. What struck me the most about them was their passion for their jobs and their desire to keep searching for stories even during the quiet times. Those are two of the key aspects of being a successful journalist.”

Turning her attention to women’s sport, Isaacs strongly believes that more sponsors and support from broadcasters and fans are needed in order to boost its profile.

“It is sad to see how little coverage there is on women’s sport at national and provincial level across all sporting codes. Even some sports organisations ignore their women’s results, which makes it hard for anyone following the teams to keep track their progress.

“The women’s hockey and rugby results, however, are often released and full match reports distributed to the media, but unfortunately they are not published in the mainstream media.”

Isaacs has special praise for the growth of women’s rugby in South Africa, but still feels much more could be done to ensure a better pipeline of players through to national level.

“I think it is reaching a new level of professionalism thanks to the introduction of many more international female competitions and Sevens rugby into the Olympic Games from 2016. The South African Rugby Union (SARU) and the national coaches have been doing as much as they can to boost the depth in players and the teams’ standard of play at all levels, and I believe they will reap the rewards in the next few years.

“The downside, however, is that the provincial unions are not doing enough to boost women’s rugby, which makes it tougher for the national coaches to select players who are ready to compete at the highest level.”

Her favourite women sports stars include Investec South Africa women’s hockey captain Marsha Marescia, world record goal scoring Pietie Coetzee, the Williams’ sisters and Paralympic icon Natalie du Toit, who she describes as one of the most inspirational athletes in the world.

Isaacs says she is driven to the best she can. She is also hard on herself, so she gives 100 per cent in everything to make a success of anything she takes on.

“My family, colleagues and friends have been extremely supportive over the years, and they always encouraged me to keep going. They are also always wiling to give feedback and constructive criticism, which I appreciate because I believe the only way one can grow and improve, is if you know what your weaknesses are.

Isaacs is always looking to learn and absorb as much as she can, and recalls some key advice she has received over her career.

“If you do something you enjoy, you don’t work a day in your life. Springbok coach Heyneke Meyer told me that several years back, and over the years I have learned that it couldn’t be more true.

“The other valuable advice I received was: if you believe in yourself, other people’s views don’t matter, although it is a good thing to listen to constructive criticism.”

While she certainly loves what she does, it does become tricky balancing family and career, but for now, she is managing to juggle the two.

“It is tough, especially since most rugby matches take place over weekends and sometimes we only leave the stadium after 11pm, and also given all the different projects I am currently involved with, there is very little free time.

“But I try to spend as much quality with my family as possible when I have time off. Fortunately they understand the demands of my career, so they do not expect me to be around much when rugby and golf season is in full swing.”

Isaacs is keen to make a success of her new projects in 2013 and increase her skills with an eye on the future. “I have been lucky enough to achieve a handful of things I never thought would be possible, and being someone who takes things one day at a time in life, I suppose I would like to continue growing and learning as a journalist in my mission to do the best I can.

“What I would ultimately like to achieve,” says Isaacs, “is for the people who I have worked with to remember me as a hard-working and dedicated person.” She has come a long way in her career, but I suspect we are yet to see the best of SA’s First Lady of Rugby, Zeena Isaacs!