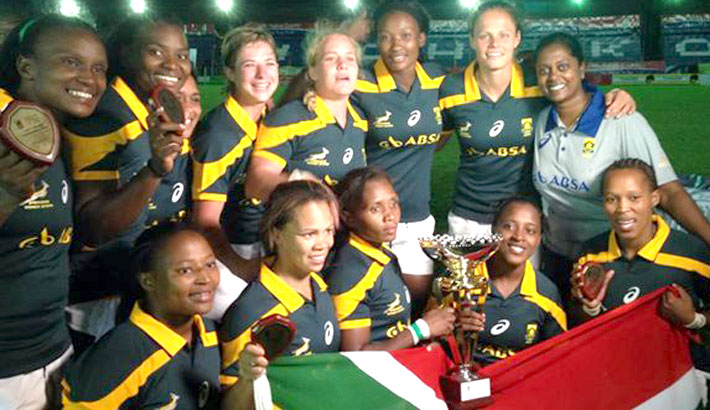 The Springbok Women Sevens on Saturday progressed through the Confederation of African Rugby (CAR) Sevens tournament in Kenya unbeaten to defend their title in style – a result which inspired coach Renfred Dazel with an eye on the IRB Women’s Sevens World Series in Amsterdam next month.

The Springbok Women Sevens then crossed paths with the hosts, Kenya, who put up a brave fight in the first half, but lacked the firepower to beat the visitors, who emerged 21-12 victors.

These three victories booked captain Zenay Jordaan and her team a place in the Cup semifinal against Zimbabwe, and with form and confidence counting in the team’s favour, they produced a spectacular performance for a 43-0 victory and a final berth against Kenya.

To Dazel’s delight the visitors delivered another solid performance on attack and defence to register a 15-0 victory and secure the title as CAR Women’s Sevens champions.

Dazel was pleased with his team’s performance and believed it would boost the players’ confidence as they begin preparations for their toughest assignment so far this season, the IRB Women’s Sevens World Series leg in Amsterdam on May 16 and 17.

“The IRB Sevens Series is important for us in many ways,” said Dazel.

“Apart from facing some of the top teams in the world, we are determined to prove that we are good enough to be among the eight core teams on the IRB Women’s Sevens World Series circuit with the 2016 Rio Olympic Games approaching. So hopefully the team will be able to build on this impressive performance next month and make their presence felt.”

Zoning in on the tournament, Dazel praised the players for sticking to the structures and showing a steady improvement in all their matches.

“I am proud of the team,” said Dazel. “We arrived in Kenya with very little knowledge about the opposition sides, so a large part of our focus was on what we wanted to achieve in terms of our game plan, and it was fantastic to see the team implement it so effectively.

“They approached every match with a good attitude and never allowed complacency to creep in, which is could easily happen when one starts building winning momentum.”

The CAR Women’s Sevens victory follows an encouraging third-place finish at the Hong Kong Invitational last month and adds to an impressive Springbok Women Sevens track record in the CAR series, as the team won the 2013, 2011, 2008, 2007 and 2006 editions of the competition.