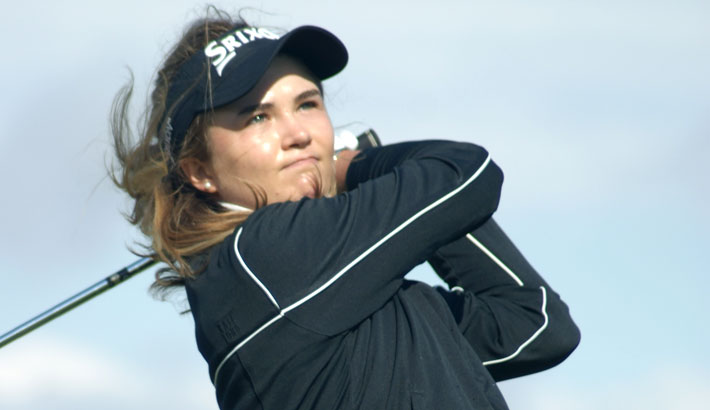 The Sanlam SA Women’s Amateur Stroke Play Championship is still wide open, with three of the country’s top four women amateurs within one shot of each other headed into Tuesday’s final round at Stellenbosch Golf Club.

South African number one Magda Kruger and Ji Sun Kang are tied for the lead on four over par, with Carrie Park one stroke back following a tough second round where the oppressive heat was replaced by gusting winds.

Kruger signed for a 74 in which she made her first birdie over 36 holes, while Kang was left reeling a bit after an eight on the par-five 12th on her way to a 76.

“It was tough in the wind, but to be honest I find the course pretty straightforward if you can keep it on the fairway,” said Kruger.

But it was this area of her game that let her down on Monday as she struggled with her driver. “I figured something out over the last few holes, so hopefully that won’t be a problem on the final day. I’m really motivated to win this, and it would be great if I could achieve it.”

Kang was looking solid for most of her round, until she unravelled on the par-five 12th. The young Western Province star hooked her drive and had to take an unplayable, from where she chipped out onto the fairway. From there she took on a tough pin cut close to the water, and found more trouble.

After a penalty drop and two-putt, Kang stepped off with an eight.

“I played really well the first nine holes, and then had my problems on the 12th. But otherwise I was solid. I just didn’t make enough putts, which is something I hope to change for the final round,” she said.

At one stroke off the lead, Gauteng North’s Park is delighted at having given herself a chance in the final round.

“I was a few shots back at the start of the second round, and I really thought somebody was going to open up a bigger lead. So to only be one behind going into the final day is exciting,” she said after her round of 73.

She could’ve well shared the lead were it not for an indifferent back nine. Park turned one under, but then played her second nine in two over.

“I was a bit disappointed because I felt like I’d done the hard work of coming through those tough first five holes in level par. But I just couldn’t make any putts on the second nine,” she said.

Western Province’s Cara Gorlei, KwaZulu-Natal’s Michaela Fletcher and Gauteng’s Kaleigh Telfer are all well placed at six over par going into the final round.