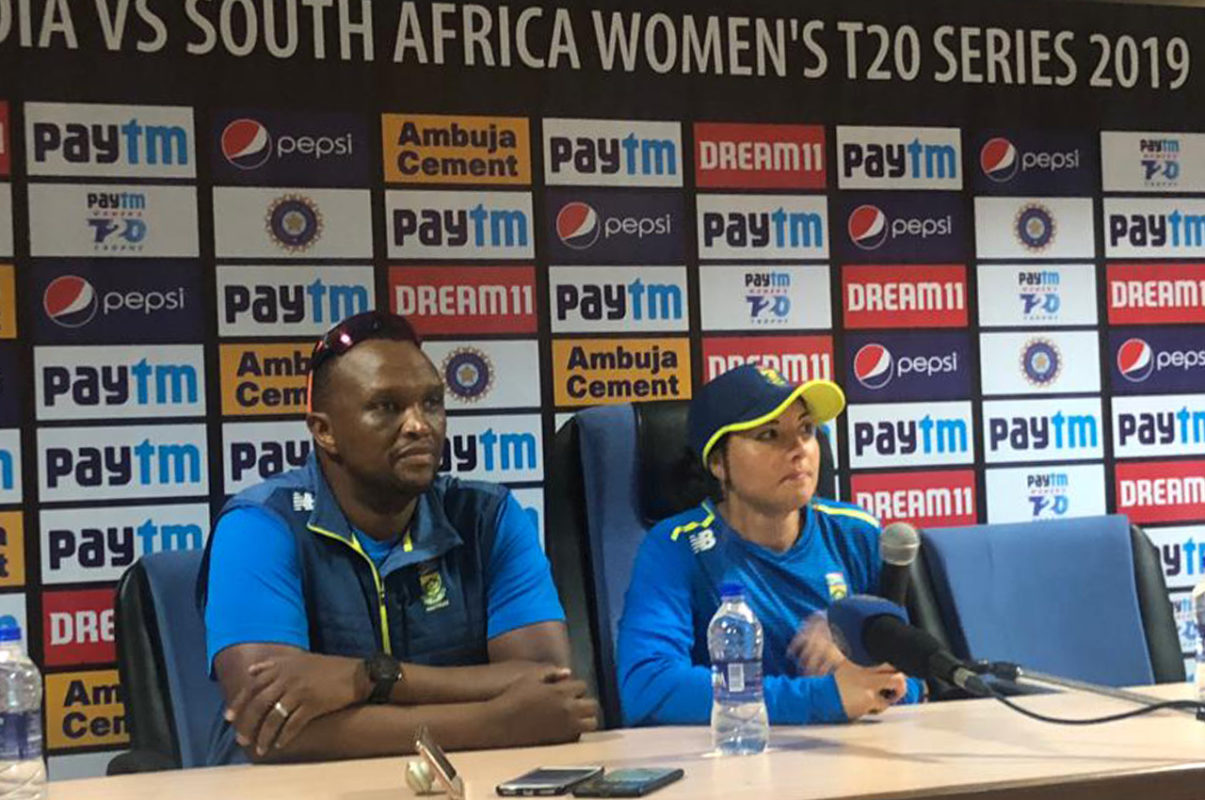 India made no mistake when a break in inclement weather allowed them to thoroughly overwhelm the visiting South Africans by 51 runs in an rain-reduced fourth T20 international on 1 October 2019, at the Lalbhai Contractor Stadium in Gujarat, India.

With the second and third series fixtures in tournament host city Surat already rained out, Tuesday’s drubbing earned the India a valuable series victory with the remaining fixture on Friday reduced to an academic exercise, at best an opportunity to maximise focus ahead of the three-ODI series commencing in Vadodara in a week’s time.

After rain pelting down for days and the wicket under the covers, the surface was always going to be difficult for both teams, but when SA skipper Suné Luus won the toss and put India in to bat first, South Africa’s failed attempt at chasing a challenging total in the first fixture sprung to mind for South African supporters.

“It was a bad day at the office. One dropped catch led to another.” SA Skipper, Suné Luus

But in the final reckoning, it was sadly the South Africans who lost the match all by themselves, with dropped catches littering a miserable innings in the field, which would have had a markedly different complexion had the chances been claimed.

The Indians’ batting exploits were led by a precocious innings in the 15-year old Shafali Verma, who rode a charmed streak of luck to post 46 off 33 balls to more than make up for her debut innings duck, which when added to consistent performer Jemimah Rodrigues’ impressive contribution, ensured a difficult target of 141 for the visitors’ hopes of keeping the series alive.

Partnerships and solid performances by senior players would be key in any SA success attempt, and when Lizelle Lee was run-out meekly in the second over, a collective sigh could be felt across the nation.

“We knew it was going to be tough for the youngsters coming here and making their debuts.” – Proteas Women Head Coach, Hilton Moreeng.

Laura Wolvaardt looked good with four boundaries but was gone too soon for a run-a-ball 23, and the final result became clear after Player of the Match Poonam Yadav took Nadine de Klerk’s and Mignon du Preez’ wickets in successive deliveries in the eleventh over, leaving the Proteas Women a target of 76 off 37 balls with five wickets remaining for an unlikely win.

Any small consolation that the Indians didn’t manage to bowl the Proteas out in their allotted overs must be balanced by the reality that the African champs only managed a total of 85/7 in their 17 overs, and haven’t taken shape as realistic challengers for a win in the series to date.

With India’s series lead unassailable series lead established, both sides will approach Friday’s series concluding fixture with a relative degree of freedom, with India no doubt seeking to force a series whitewash, while South Africa will work at any chance at an upset result in the final T20 fixture, weather permitting.

Picture 1 caption: Proteas head coach Hilton Moreeng and Proteas Women stand-in captain Suné Luus reflect on a thoroughly disappointing match for the team, who lost the second T20I by 51 runs, and with it conceding the series win to India in Surat on Tuesday, 1 Octobe, 2019. Photo: Cricket South Africa

Picture 2 caption: The enthusiastic crowd deserved a match after admirable and sustained support throughout the rained out matches, but the South Africans will rue a match and  series loss that will be tough to bounce back from. Photo: gsport