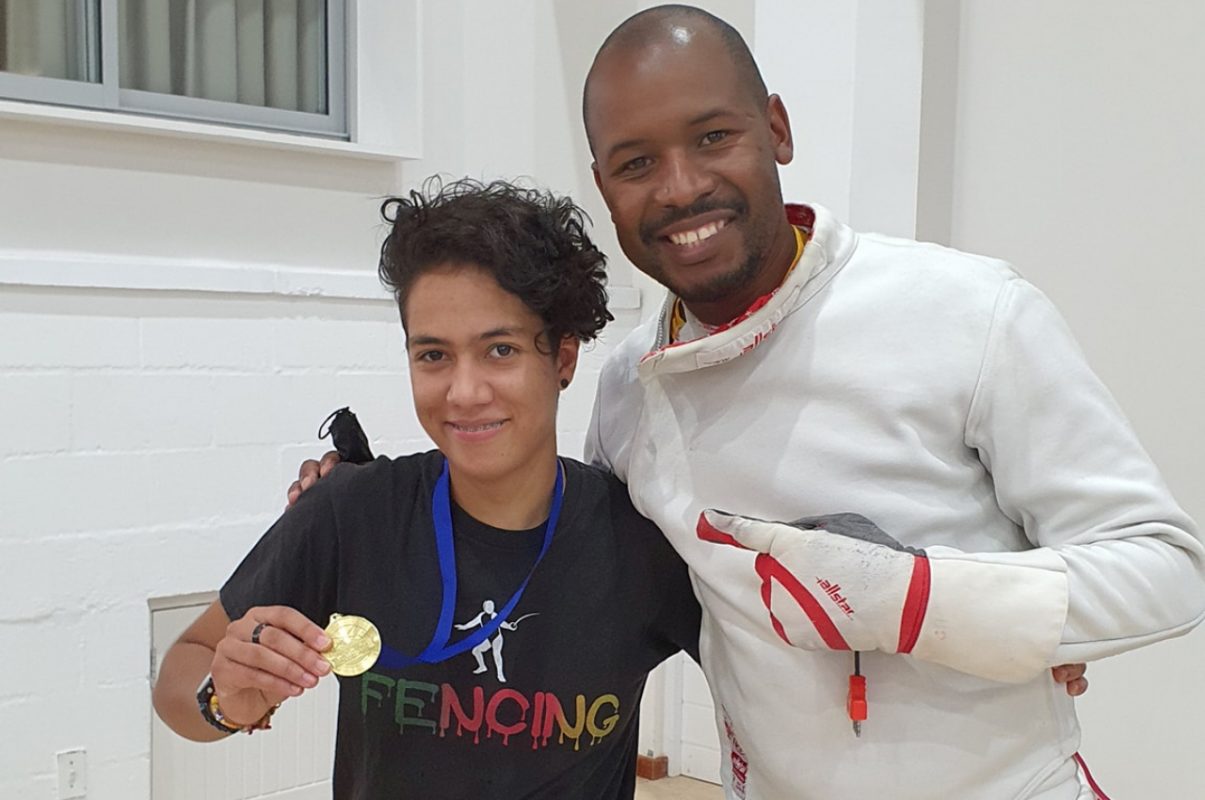 Limpopo fencer Anokha van Manen of the Sello Maduma Fencing Academy will be flying the South African flag high when she makes her debut at the Commonwealth Games, taking place in Birmingham, England from 28 July 8 August 2022.

The 20-year-old who is studying Physics online through the Open University of the UK, is currently ranked number one in SA both in the senior and junior in epee and sabre of the women’s category.

Van Manen missed out on the recently concluded Eastern Cape Fencing National Championship which took place in Gqeberha due to injury, but reveals she will be back and ready to compete in July.

Speaking to gsport, van Manen chats about her passion for fencing and reveals her aspirations.

Anokha, thank you for taking time to speak to gsport. Please can you briefly tell us about yourself?

My name is Anokha van Manen from Limpopo and I am part of the Sello Maduma Fencing Academy. I started fencing in 2016 when I was 14-years-old and since then I have competed in many different events – national and international competitions such as World Championships.

I also qualified for the Commonwealth Games this year.

What sparked your interest for fencing?

Well, we had a fencing club in the small town of Polokwane which was quite surprising to us and since my brother and I recently stopped playing soccer, we were looking for a different sport to play.

We decided to do fencing, we went once and never left, we just carried on!

Why did you decide to stop playing football?

The coaches and just the general way everything was done annoyed to us and we decided it was time to take up a different sport. At the fencing club there was a wonderful atmosphere and it was very nice. I mean who doesn’t want to stab people with swords? (laughs)

What do you enjoy most about fencing?

The thing I enjoy the most, is that it’s a combat sport in its pour form. When you get on the piece it’s you and your opponent. Whatever you do and whatever your opponent does it’s all up to you.

There’s an adrenalin and a focus that you need which I’ve never found any other sport that matches the same feeling as fencing gives.

We understand there are three different categories or styles which one competes in fencing. Which one do you compete in?

There is three different weapon’s so its foil, épée and sabre. Foil you hit with the point and you only hit the torso and there are a set of rules of who has the right of way, which is quite complicated.

Sabre also has the right of way rules as well, you hit above the torso, but you are allowed to hit with the edge and as well as the point.

The épée is descended from the duelling weapon as such it doesn’t have the right of way conventions because you can hit anywhere on the body. You can hit the tip of the toe, the head or hand anywhere and in épée you can also get a double point.

In foil and sabre only one person can get the point because of the right of way convention, so in épée you can both hit each other at the same time and get a point each.

I compete in épée and foil.

Which one do you enjoy most between the two?

That is a very difficult question because they are both quite different. I enjoy the sort of flamboyant of foil because the way it’s fenced, the right of way conversion, its different tactics and techniques, it’s very entertaining to fence.

Whereas épée can be more of intense in tactical preparation because if you make one mistake they are going to hit you on the wrist and then you have a problem.

So you have to be a lot more careful in épée, but at the same time when you get that nice quick charge you get a proper point. The tactics are different but I enjoy different aspects of both of them.

I just enjoy fencing as a whole, so obviously I am going to enjoy either weapon.

What are your achievements so far?

So far I have qualified and competed in two World Junior Championships. I am ranked number one currently in SA in all my categories, junior, senior women’s épée and foil.

I competed in the African Championships where I took a team silver medal in the women’s épée event and I was placed seventh in the individual épée event.

It must have been tough to only choose to attend one event. We are sure you would have loved to attend all three championships.

Yes it was a tough to choose and pick one, but I mean it’s something I have gotten used to because I already know I can’t go to all of them.

You recently missed out on the Eastern Cape Fencing National event due to injury. How did you get injured?

I would have loved to compete there ideally but my injury has to heal properly. I injured myself while I was training, I snapped two ligaments and tore a muscle partially. So I would rather give it a good chance to heal and be able to compete in Commonwealth then take a risk and not be able to compete for a long time.

After the six weeks period of healing, it would probably take a month for me to get back at full speed again, but in the interim I’ll be able to work on other things that’s not core fencing.

For example, I can work on my strength, mental game or my point control and sort of focus on things that are sometimes left out a bit because we are so focused on fencing itself.

Lucky enough I do have one competition before Commonwealth Games where I can up my points to make sure that I make it. Point wise I will qualify but the placement of my qualification in the seniors will determine if I get to compete in the seniors event as well, because there are only four places in the team.

Are you looking forward to the Commonwealth Games?

Yes, I mean it’s a great honour to be competing at the event. It will be my first Commonwealth Games – every international competition is a really big thing for athletes.

What are your future plans in fencing?

My future plans? I have qualified for the Commonwealth Games, so right now I am trying not to look too far ahead, I am focusing on this. I mean every fencer dreams of the Olympics and I would love to find myself there one day, but for now my focus will be on Birmingham and on improving my fencing in the senior category so that when I compete overseas I can really compete on their level.

Who do you look up to?

I would say the person I look up to most in fencing is my younger brother. We fence together and he has always been a great example for me. We help each other, we train together and we pretty much do everything in fencing together.

I have always looked up to him as someone that I can take inspiration from.

Photo 1 Caption: Limpopo fencer Anokha van Manen of the Sello Maduma Fencing Academy will be flying the South African flag high when she makes her debut at the Commonwealth Games, taking place in Birmingham, England from 28 July 8 August 2022. Photo: Supplied