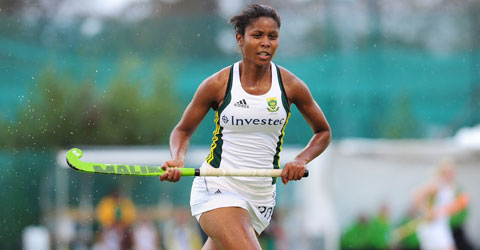 The Investec South Africa women’s hockey team were edged 2-1 by tournament favourites Australia in the Champions Challenge quarter-finals in Dublin Thursday after the score was 1-1 at half-time.

Australia will now meet Scotland in the semi-finals while South Africa will play old rivals India in Saturday’s cross-pool playoffs that will determine who meets who on Sunday for positions five to eight.

Australia opened the scoring in the 12th minute when Anna Flanagan’s drag-flick penalty corner sailed into the top corner (1-0).

Both sides had opportunities thereafter before Lisa Deetlefs offloaded to right-half Nicolene Terblanche, who drilled up the line for Izelle Lategan to provide the final pass to Sulette Damons, the striker smashing into the backboard past keeper Toni Cronk (1-1).

Just two minutes before the half-time break Damons had a terrific opportunity to put SA in front after great build-up from the outstanding right half Nicolene Terblanche and Bernie Coston, but her shot went wide with only the keeper to beat, a chance she would back herself to score from more often than not.

Although South Africa had their chances up front in the second half, Australia were the dominant team in the face of brave SA defence, and an unforced error led to the Hockeyroos’ third PC with four minutes left, which Emily Smith scrambled home after a goalmouth skirmish (2-1).

The first genuine opportunities came when the quarter-final was six minutes old, the in-form Coston – a fourth-year chiropractic student at University of Johannesburg who was thoroughly enjoying her 50th Test match, making yards down the right channel before Damons and then Lesle-Ann George came close. A penalty corner followed but Tarryn Bright’s effort was blocked.

South Africa’s 19th minute equaliser was the prelude to a ding-dong battle as play swung to and fro, defensive midfielder Bright getting through a mountain of work while superb SA captain Lenise Marais and Deetlefs were busy marshalling the defence.

In the first 12 minutes after the changeover Australia had two very good chances but SA keeper Sanani Mangisa was on hand to keep her goal intact.

An Australian PC in the 50th minute, their second, saw captain Jodie Schulz’s flick go high and wide before Smith failed to latch onto a bobbing ball as the girls from Down Under cranked up the pressure.

A few more chances went astray, although SA had a goalscoring chance or two of their own until Smith’s winner near the end.

South Africa, in a building phase, were without eight players who were at the London 2012 Olympic Games.

The time of the TV broadcast of South Africa’s match against India has still to be announced by SuperSport.