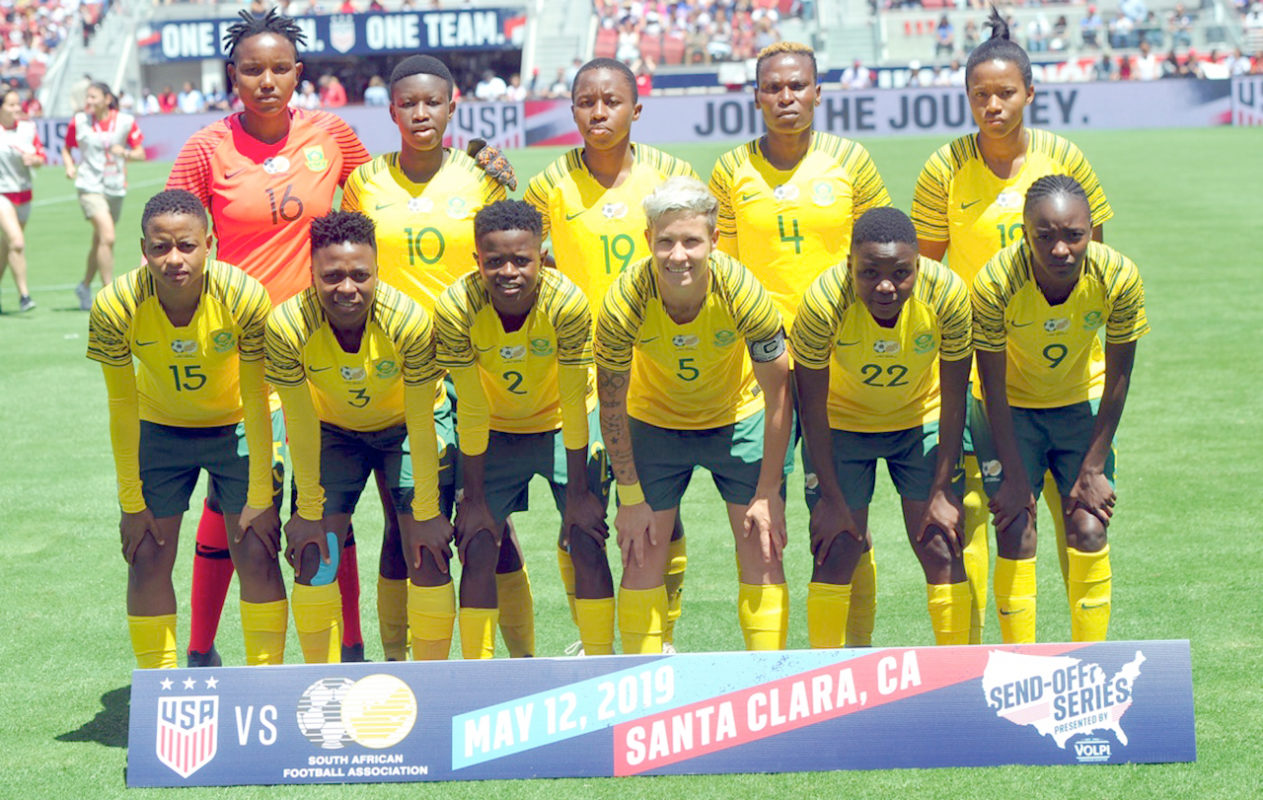 Sasol-sponsored Banyana Banyana got a taste of what the upcoming 2019 FIFA Women’s World Cup will be like when they went down 3-0 to a strong USA Women’s National Soccer Team.

The clash took place on Sunday, 12 May 2019 at the Levi’s Stadium – the home of the San Francisco 49ers in Santa Clara, California. It was the first time the USA Women’s National Team used the venue, and they pulled in a good crowd of 22,788 fans.

This game was used by both nations to prepare for the World Cup, which kicks off in France next month, from 7 June to 7 July.

Banyana Banyana coach Desiree Ellis included the uncapped Sibulele Holweni in the starting line-up – she was the captain of the U17 Women’s National Team at the FIFA U17 Women’s World Cup in Uruguay last year.

The visitors suffered a serious setback when Kholosa Biyana replaced midfielder Mamello Makhabane on the starting list – Makhabane reported that she felt pain on her knee following a tackle at training on Saturday.

The last time the two sides met three years ago in Chicago, the home side won 1-0.

This time around the South Africans started well and held firm despite relentless attacks by the USA, who are the reigning World Champs and the number one ranked country on the FIFA women’s ranking.

But the visitors were caught out in the 37th when Samantha Mewis beat Andile Dlamini in the Banyana Banyana goals with a low shot that gave the hosts the lead.

At the beginning of the second stanza, Desiree Ellis pulled off Rhoda Mulaudzi and brought on another youngster, Karabo Dhlamini – who was also at the FIFA U17 Women’s Cup.

In the 51st minute Ellis made a forced substitution when she had to replace defender Noko Matlou, who looked to have injured herself in a tackle – Bambanani Mbane took her place, while Kaylin Swart came in for Andile Dlamini in goals in the 67th minute. Holweni checked out in the 74th minute to give space to US-based Nomvula Kgoale.

There were some scary moments for Banyana Banyana goals but the defence worked hard to deny the home team that was growing impatient with their one-goal lead.

When the defence had been bridged, Swart came to the rescue and she was kept busy by the on-going attacks from the USA.

But in the 78th minute, Swart could do nothing as Mewis pounced again to score the second for the hosts, and her second of the day for a 2-0 lead.

Sensing blood, the Americans came with guns blazing and threw everything at South Africa – but Swart stood firm and pulled off some great saves.

The world champions did get their way in the end.

In referee’s optional time they squeezed in the third goal after a goalmouth scramble – through second half substitute Carli Lloyd.

Banyana Banyana next face Norway on 2 June in Amiens, France at Stade Moulonguet. This will be the first ever meeting between the two countries, and will be South Africa’s ninth match as they prepare for the World Cup.

Ellis’ charges are expected to land in South Africa on Wednesday, 15 May at 08h10 from the USA.