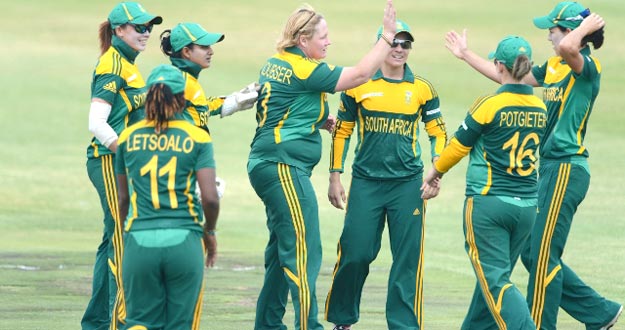 Solid starts by each member of the top order ensured the Momentum Proteas won their second consecutive One-Day International (ODI) series after they beat Sri Lanka by 67 runs in Potchefstroom on Saturday.

Three half-centuries from Lizelle Lee, Mignon du Preez and Marizanne Kapp set the hosts up with a daunting 274/3 at the end of their innings when they were asked to bat first. They lead the three-match series by an unassailable two-nil.

Trisha Chetty and Lee got off to a strong start, sharing a 72-run opening stand before the former was trapped lbw by Shashikala Siriwardena at the start of the 19th over for 37 off 45 balls. Lee dominated her partnership with Du Preez, hitting six fours and three sixes before she was similarly trapped leg before by Siriwardena for 65.

Du Preez (79 off 87 balls) and Marizanne Kapp shared the most destructive partnership, adding 123 runs before Kapp was bowled for 72 off 67 balls with just one over remaining of their innings.

In reply, Sri Lanka could only manage 207/8 in their 50 overs. Although the fielding was loose at times, the South African bowlers, led by Shabnim Ismail and Sunette Loubser (3/34 and 3/51 respectively), kept their attack tight, squeezing wickets at crucial points.

Siriwardene (68) was the only batter to score a half-century, adding 40 with Chamani Seneviratna before her removal.

Proteas women’s captain, Du Preez, was delighted with the win. She was particularly happy with her side’s ability to claim victory under tough conditions. “I think we did really well, another series win makes me really happy,” she said.

“The top order did really well to get us to a good position so I’m happy with the first innings. There were a few extra runs that we didn’t need to give away but I’m happy with the way the bowlers recovered. It was definitely a team effort today.”

She is looking forward to the final game on Monday, planning a second clean sweep series.

“We want to carry this momentum into the last game and finish on a high,” Du Preez continued.

“It would be really good to finish with a three-nil series victory, we look forward to going out there and giving it our all.” Play starts at 10am and entrance is free.