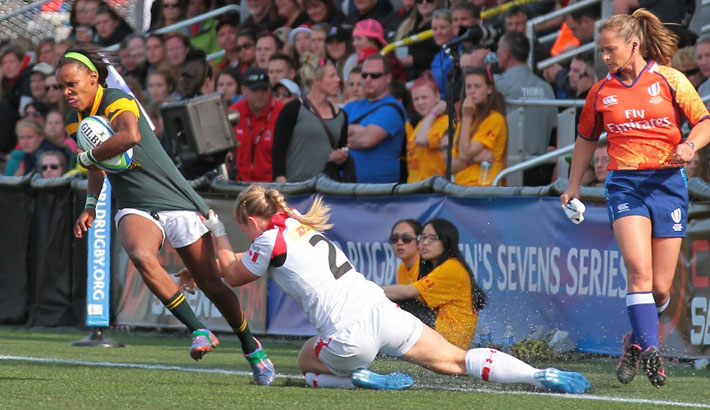 The Springbok Women’s Sevens will be under immense pressure to advance to the final of the World Rugby Women’s Sevens Series Qualifier in Dublin on Saturday and Sunday where their fate in the 2015/2016 World Series will be determined.

“This occasion is as big as it gets, and the players know what is expected of them,” said Springbok Women’s Sevens coach Renfred Dazel, as South Africa prepares to go head-to-head with hosts Ireland, Hong Kong and Mexico in the pool stages on Saturday, at the University College in Dublin.

“We played on the World Series last season, and although we did not achieve the desired results, we learned important lessons and it allowed us to build character as a team.

“That said, we are expecting tough competition as we face the hosts Ireland in the pool stages, while China and Brazil also played on the World Series,” said Dazel. “Amsterdam also secured a victory against us in the final leg of the World Series in May, so the two teams that qualify for the World Series next season will have to work hard for that honour.

The Springbok Women’s Sevens qualified as a core team on the Series for the first time last season which gained them entry into the 2014/2015 World Series. The team, however, finished last on the log table, resulting in them having to battle it out with 11 other teams for the two remaining places on the 2015/2016 World Series.

The other teams participating in the Qualifier are 2016 Olympic Games hosts Brazil, Wales, Japan, Samoa, China, Netherlands, Kenya and Columbia. Of these teams, Brazil and China participated in the 2014/2015 Series with South Africa.

“From a South African perspective it is vital that we qualify for the World Series because, apart from boosting our confidence for the Africa Olympic Qualifier next month, it will also serve as the perfect preparation for the Olympic Games if we were to qualify,” continued Dazel.

“We were exposed to the high quality of the rugby in the World Series regularly in the last season and I believe that if we continue to compete at that level, our standard of play will continue to lift as well.”

Dazel made only one change to his 12-member squad from the Amsterdam Sevens in May, with physical forward Rachelle Geldenhuys returning from a knee injury in place of Sunelle Barnard, and he hoped that the continuity in selection would assist their cause.

“This group has been playing together for almost two seasons and they know one another on and off the field,” said Dazel. “Hopefully this will show in the quality of their performances.”

Photo 1 caption: The Bok Sevens’ Phumeza Gadu struggles to make headway against Canada in the Langford, Canada round of World Rugby’s Women’s World Sevens Series, on 12 May, 2015. Coach Renfred Dazel admits that his team are up against big odds, as they look to qualify for the 2015/16 Rugby World Series in Dublin this weekend. Photo: Judy Teasdale