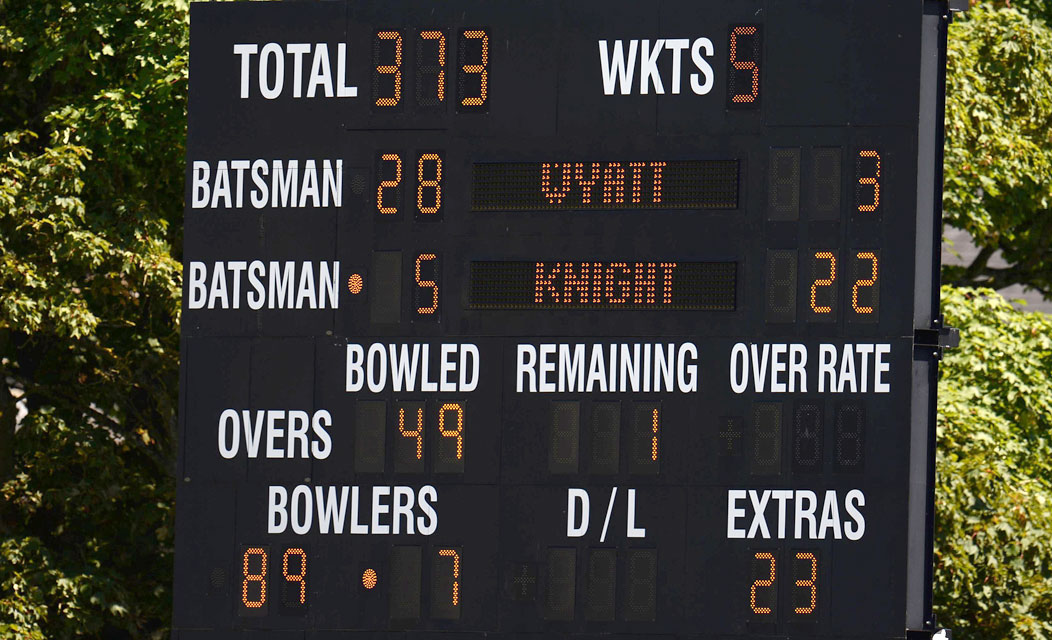 A record 275-run second-wicket partnership between Tamsin Beaumont (148) and Sarah Taylor (147) guided England to an impressive 68-run victory over South Africa in a high-scoring ICC Women’s World Cup 2017 match in Bristol on Wednesday.

Beaumont slapped 22 fours and a six in her 145-ball innings while Taylor clubbed 24 fours in a 104-ball knock as they piloted England to an imposing 373 for five in 50 overs.

In turn, South Africa put up a gallant run chase and finished at 305 for nine as a world record 678 runs were scored in the day, beating the previous best of 577 runs between Australia and New Zealand in Sydney in December 2012 by 101 runs.

The 275-run partnership between Beaumont and Taylor was the highest-ever for England for any wicket and second best overall in women’s ODIs after India’s Deepti Sharma and Punam Raut had put on 320 runs for the first wicket against Ireland in Potchefstroom in May 2017.

It was also a record second-wicket partnership, beating the 262-run stand between New Zealand’s Suzie Bates and Haidee Tiffen against Pakistan in the ICC Women’s World Cup 2009 in Sydney.

Beaumont and Taylor had joined hands in the 12th over at the score of 59 and the association ended in the 47th over at the total of 334 after Taylor fell to Shabnim Ismail. Beaumont was the fourth batter to be dismissed, becoming one of three Marizanne Kapp victims but not before putting her side in a position from where it could dictate terms.

This was England’s third victory in four matches, while it was South Africa’s first defeat in as many matches to go with one abandoned game against New Zealand.

Elsewhere, defending champion Australia and India maintained their unbeaten run in the tournament when they defeated Pakistan and Sri Lanka, respectively, in contrasting styles. The defeats mean the two Asian sides now only have a mathematical chance of reaching the 18 and 20 July semi-finals as it was their fourth successive losses with three group-stage matches remaining.

In Leicester, Australia routed Pakistan by 159 runs following excellent half-centuries by Ellyse Perry, Alyssa Healy and Elyse Villani, whereas India held its nerve to overcome Sri Lanka by 16 runs after Deepti Sharma and Mithali Raj had put on 118 runs for the third wicket, which lifted India to 230 for seven.

However, the stars of day eight of the ICC Women’s World Cup 2017 were 26-year-old Beaumont from Kent and 28-year-old Londoner Taylor.

The two batters matched each other stroke for stroke as they creamed the South Africa bowlers with excellent stroke selection, precise timing and textbook footwork to justify Heather Knight’s decision to bat first after winning the toss.

Beaumont, playing only her 39th ODI, also reached 1,000 ODI runs on way to hitting her third career century, while Taylor, featuring in her 105th ODI, notched up her sixth career century. With 3,515 ODI runs against her name, Taylor is the ninth most successful batter in the history of women’s cricket.

Beaumont reached her half-century from 71 balls with eight fours, while she completed her century in 118 balls with 15 fours. Taylor was more consistent, taking 49 balls for her first 50 runs and another 49 balls for the second 50 runs. However, she had more boundaries in her second 50 – nine as compared to seven.

It was Beaumont and Taylor, who after taking England to 167 for one in 30 overs went on a rampage in the last 20 overs, which yielded 206 runs for the loss of four wickets as the home side finished at 373 for five in 50 overs.

Facing a stiff target, Lizelle Lee and Laura Wolvaardt provided South Africa a brisk start when they added 128 runs for the first wicket in 25 overs. After the two batters were dismissed, South Africa continued to try valiantly but the target proved a mountain as it eventually finished at 305 for nine after requiring 150 runs off the final 10 overs.

Lee was the first batter to be dismissed after scoring 72 that came off 77 balls and included seven fours and two sixes, while Wolvaardt, who was the third batter out at the score of 167, scored 67 from 103 balls with nine fours. Chloe Tryon was the third half-centurion of the innings when she scored 54 off 26 balls with five fours and four sixes. Tryon added 75 runs for the fifth wicket with Mignon du Preez (43, 39b, 4×4).

For England, Danielle Hazell was the pick of bowlers with three for 70, while Knight claimed two wickets for 52 runs.

Photo 1 caption: England’s Tamsin Beaumont and Sarah Taylor hit masterly centuries after winning the toss and electing to bat, compiling a 374-run target for the Momentum Proteas, one which was a step too far for the South Africans, who conceded a 68-run loss despite a brave batting effort by the team. Photo: ICC
Photo 2 caption: This was the Proteas’ first loss in four World Cup matches, and they currently stand fourth in the tournament log after Australia, India and England, and one point ahead of New Zealand, who have a game in hand. Pictured is Chloe Tryon the best of SA’s three half-centurions in the loss, her 54-run innings coming in 26 balls, and boasting five boundaries and 4 impressive sixes. Photo: ICC
Photo 3 caption: The first innings heroines were England skipper Sarah Taylor (left) and opener Tamsin Beaumont, who’s 275-run 2nd-wicket stand featured some breathtaking batting, in which all of SA’s seven bowlers came in for some heavy treatment. Photo: ICC