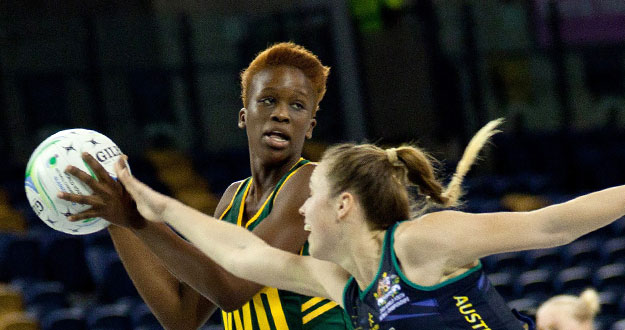 Brave SA U21 Netball Team to Take on England

Despite putting in a good effort on Tuesday in Glasgow, the SPAR Baby Proteas were no match for Australia in their final pool game of the World Youth Netball Championships.

It was evident that the Australian players were more at home on court, as they edged further and further into the lead, finally defeating the girls in green and gold 59-27.

Off to a slow start, the U21 South African side lost their first centre to Australia who ran away with the ball. Both teams made a number of errors, but SA particularly doing so as they approached their goal circle, losing opportunities at scoring.

The Australians gave them no room to move as they marked the SPAR Baby Proteas with physical play, allowing them only four goals to their 13.

The second quarter continued in a similar manner as the fast and quick Australians charged ahead. “Australia is very fast” said Vice-Captain Rochelle Lawson after the game. “This is something that we can work on.”

The SPAR Baby Proteas struggled to keep ball in hand, and Australia had sunk 9 goals before South Africa had touched their net. The half-time score was 32-10.

After a motivating half-time talk by team coach Dorette Badenhorst, the SPAR Baby Proteas reappeared as a different team. “I told them to set a target for each quarter, and that we were not going to quit. We needed to keep fighting, the game wasn’t over yet!”

South Africa was first to score and appeared to be playing more as a team. The combination of goal shooter Danelle Willemse and goal attack Mari-Lena Joubert was very strong.

Goal keeper Shadine van der Merwe was superb on defence, turning over a number of the Aussie balls, and only allowing Australia to score one more goal than her team in the third quarter.

However, the last quarter of the game wasn’t as hopeful, as the SPAR Baby Proteas started to tire. Despite keeping up the fight, and forcing a few errors, the strength of the Australian team proved too tough. The last few minutes saw the South Africans make a number of errors, and Australia dominated scoring 16 goals to South Africa’s 7.

“At one stage we played very good netball, but we need to play more as a team” said Dorette Badenhorst after the match. “We lost our possession along with our confidence. It was tough out there, and they [fusion_builder_container hundred_percent=”yes” overflow=”visible”][fusion_builder_row][fusion_builder_column type=”1_1″ background_position=”left top” background_color=”” border_size=”” border_color=”” border_style=”solid” spacing=”yes” background_image=”” background_repeat=”no-repeat” padding=”” margin_top=”0px” margin_bottom=”0px” class=”” id=”” animation_type=”” animation_speed=”0.3″ animation_direction=”left” hide_on_mobile=”no” center_content=”no” min_height=”none”][Australia] are physically very strong. We waited for the umpires to blow the whistle but it didn’t happen. We need to be a bit more physical in our game.”

When asked about the Quarterfinal match against England tomorrow, Badenhorst said her team was ready; “We’ve got a tough game coming up. But we are going to go for the win. We are really going to prepare well and hope for the best.”

The SPAR Baby Proteas will take on England in the Quarterfinal on Wednesday at 8pm, Glasgow time.