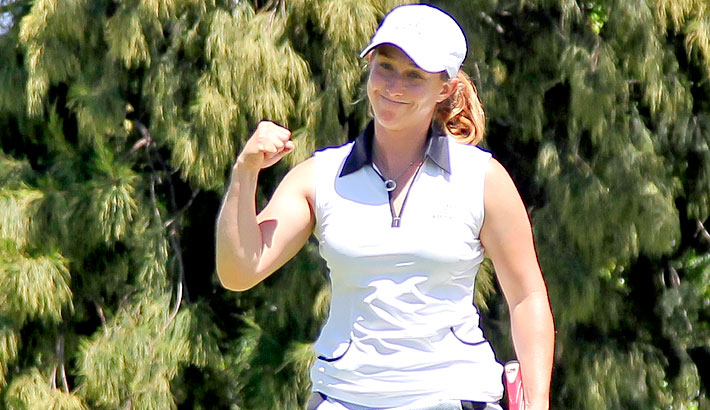 For a third time this season Stacy Bregman just trusted her ability, swing and emotions, to step into the winner’s circle on the Sunshine Ladies Tour.

Despite coming under pressure from Britain’s Lucy Williams in the final round, the 28-year-old Joburg player was the coolest customer in Cape Town as she closed out a two stroke victory in the Cape Town Ladies Open at Royal Cape Golf Club on Thursday.

The Hertfordshire golfer carded a final round one-under-par 73 to take the early lead at two under, but Bregman responded with a three under 71 to better the target by two strokes.

Her fourth conquest follows victories in the Sun International Ladies Challenge and Dimension Data Ladies Pro-Am this season and also marks the fourth time Bregman has come from behind to triumph.

“This was a really fantastic week for me,” said Bregman, who could barely contain her excitement after collecting her trophy from City of Cape Town Executive Mayor, Patricia de Lille.

“It was so great to get this new event and I just love coming back to Cape Town, one of my most favourite places in the world. We are so incredibly thankful that the City of Cape Town has extended its support to women’s professional golf, as well, and I am absolutely stoked that Mayor De Lille has confirmed our return next year.”

Bregman took the lead in the Chase to the 2015 Investec Cup for Ladies standings with her win in George on Sunday. Her latest success has taken her to 948 points and she is well clear of the chasing pack led by Melissa Eaton on 664.

“I’ve done what I set out to accomplish this season,” Bregman said.

“Now I can afford to miss the SuperSport Ladies Challenge and the Tshwane Ladies Open to play in China, because I have guaranteed my place in the Investec Cup for Ladies Finale.

“I need to get going on the Ladies European Tour so I can try to qualify for the Majors this year. Last year I started the season in Australia and finished one spot outside the top 10 qualifiers.

“The mission has been accomplished and I’m taking some great form to China.”

Bregman barely missed a fairway or green in two trips around the home of the Lion of Africa Cape Town Open. She had an early bogey in the first round, but handed in a blemish-free card.

The day was not without its frustrations, though.

“I struck the ball incredibly well and gave myself chances on too many holes to count,” Bregman said.

“It was just one of those days where the pins and the putter didn’t mesh. I had a couple of lip-outs and left a few short, including a six-footer at the 18th for birdie.”

She did reel in birdies at the second, third and seventh, unlike playing partner Rebecca Hudson.

The four-time Ladies European Tour champion signed for a 74 after 18 consecutive pars for a share of third with British compatriot Charlotte Ellis (71) and joint overnight leader, Melissa Eaton (76).

Chase to the Investec Cup for Ladies winner at Glendower Nicole Garcia, who shared the first round lead on three under, finished sixth on 148 after a final round 77.

South Africa’s first golf Olympian Kaleigh Telfer and fellow amateur Amy Henning carded respective rounds of 73 and 77 to finish a further stroke back alongside with Simon, who closed with a 78.

Photo 2 caption: Stacy Bregman trusted her ability, swing and emotions despite coming under pressure from Britain’s Lucy Williams in the final round, to close out a two-stroke victory in the Cape Town Ladies Open at Royal Cape Golf Club on Thursday. Photo: Matthew Withers / Action Pix/Lexar