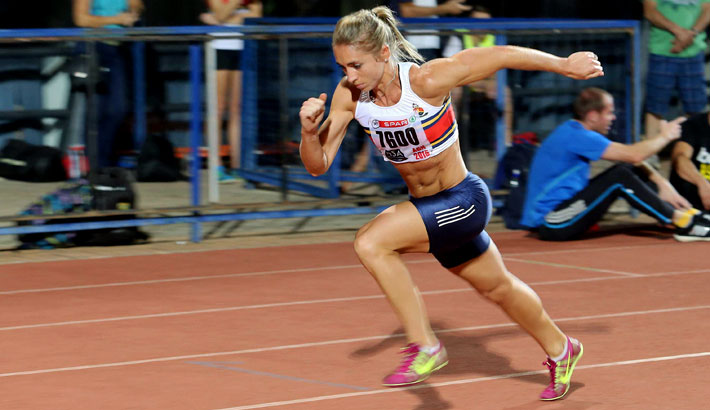 Wenda Nel (African and South African 400-hurdles champion) surprised herself on Friday night by winning the 400m in a time of 52.83s at a league meeting at the University of Pretoria.

As has become the norm over the past few seasons, Nel raced from the front right from the start.  She increased her lead with almost every step and in the end she was about four metres ahead of her rivals.

“Perhaps I should be bold and set myself slightly higher goals when racing so early in the season. There is no reason why I should not be able to consistently run fast times throughout the season. I had a look at some of the results at the indoor meetings and the times run by the athletes surprised me.  It is a given that the very same athletes will still be competitive in August at the World Championships in Beijing.”

Nel, who is sponsored by the High Performance Centre (hpc), plans to run a 200 metres race at a one hour meeting at Tuks next Monday.

“It has been a while since I have competed in the 200 metres. I will try to break 24 seconds, which is something I have never been able to do.”

Nel admits that the decision made by her coach, Hennie Kotzé, to coach in Saudi Arabia this season was a slight setback at first.

“I would have loved to have worked with ‘Oom Hennie’ for at least one more season, but I understand his reasons for leaving. Luckily most of the hard work has been done and the relationship with my new coach, Irma Reyneke, seems to be working well.

“Her approach to coaching is slightly different. She puts much emphasis on speed work combined with endurance.  Hennie Kotzé also considered endurance to be of great importance.

The South African Championships will probably be the first time that Nel will compete in the 400-hurdles this season.

“The fact that the championships will be held in Stellenbosch will give me an opportunity to redeem myself. At the 2013 SA’s I tripped over a hurdle, took a tumble and had to settle for second place. Hopefully luck would be on my side this time around,” said Nel, who won the SA title in 2010, 2011, 2012 and 2014.

Nel, who was a finalist at last year’s Commonwealth Games in Glasgow, has set her sights on reaching the finals of the World Championships in Beijing as well.

“I know it will require much hard work and huge sacrifices to do so, but it can be done.”

According to Nel, if she should get another opportunity to represent South Africa at the World Championships or at the Olympic Games next year, her approach would be somewhat different.  “I have learned that it is important not to allow other people’s great expectations to get the better of you.”

A definite highlight for Nel last year was the way she managed to improve on her best 400-hurdles time.

There are countless examples of ‘one hit wonders’ in South African athletics.  They are athletes who achieve one world-class performance but afterwards their careers fizzle out into mediocrity.

Because Nel is fully aware of this phenomenon, one of her major goals after the national championships was to prove that breaking through the 55s barrier was not a once-off fluke.

In Huelva, Spain, she managed to do so by winning in a time of 54.88s.  Then in Marrakech, Morocco, she won in the even faster time of 54.82s.  Her consistency may be considered by many as an encouraging sign that she is truly on track to run a great race at the 2016 Olympic Games in Rio.

Photo 2 caption: Glasgow 2014 finalist Nel has set her sights on reaching the finals of the World Championships in Beijing. “I know it will require much hard work and huge sacrifices to do so, but it can be done.” Photo: Reg Caldecott

Photo 3 caption: If afforded another opportunity to represent SA at the World Champs, Nel says that her approach would be somewhat different.  “I have learned that it is important not to allow other people’s great expectations to get the better of you.” Photo: Reg Caldecott