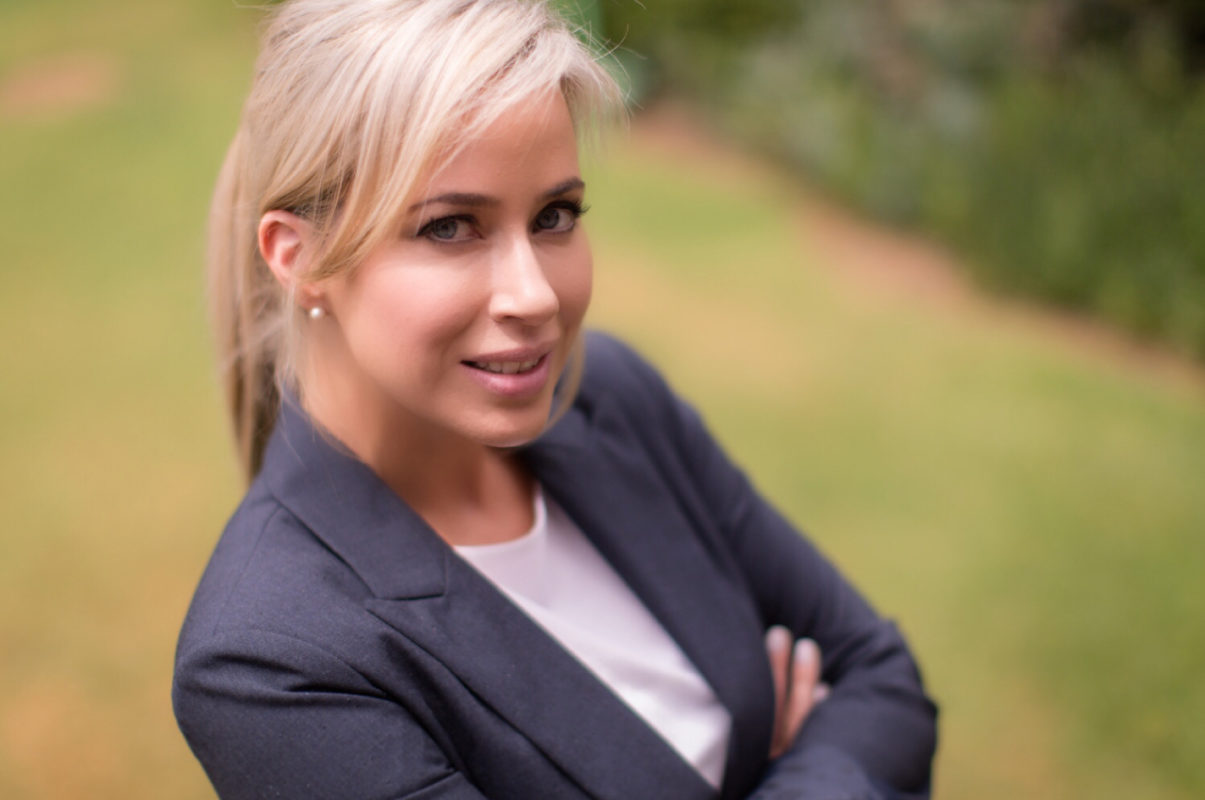 Sports PR specialist, Bronwyn Roets, has run some of the biggest PR/media campaigns on sporting sponsorships as well as activations for top brands in South Africa and she aims to continue to do so to help power her athletes’ careers forward.

17 years ago, Roets took the plunge to start her own business from her parent’s garage after the company she worked for at the time shut its doors.

Her determination to excel in the sports industry was evident from a young age and with the backing from various leading brands, Roets has gone on to work on the Commonwealth Games, Olympics and Paralympics.

She currently handles all PR/media and social media requirements of ISAM team and athletes – including swimming champion, Tatjana Schoenmaker.

Chatting with Celine Abrahams, Roets reflects on her journey from humble beginnings and wishes for 2021. 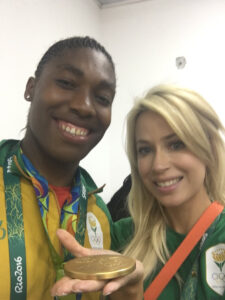 Bronwyn, thank you for making time for gsport. What a career you have had. We look forward to reflecting on it. First up, how are you negotiating a tough 2020 for all in sport?

Thank you so much for profiling my career – I am truly humbled to be approached by gsport!

Yes, 2020 has been a tough year for sport – from my side. I was supposed to have gone to the Tokyo Olympics with the athletes I work with as well as Team South Africa but it was not to be.

We also had campaigns we had strategized but luckily all the athletes’ sponsors were incredibly accommodating and were able to adapt the campaigns accordingly including the #Lane8 campaign with Audi and Wayde van Niekerk and the Visa campaigns with Tatjana Schoenmaker and Akani Simbine where we literally filmed a TV ad with a cellphone within homes through guidance from the client agency director in Dubai and Visa in San Francisco! Adapting has actually been lots of fun!

What is the silver lining for you from this year?

The silver lining is that quality time was spent with my family and that athletes were able to recover from niggles and injuries and have some much needed rest.

You have played a leading role in South African sport through various public relations work with athletes, teams, brands, federations, etc. How did it all start for you in the industry?

“I was blessed to find a job at a small PR agency and worked as a receptionist/general assistant and took every opportunity I had, learned everything I could and within a short time I grew within the agency.” – PR Consultant, Bronwyn Roets

After matriculating, my family went through a financial dip so I needed to work while I studied as I couldn’t afford the university fees. I was blessed to find a job at a small PR agency and worked as a receptionist/general assistant and took every opportunity I had, learned everything I could and within a short time I grew within the agency. We were working on amazing projects like the Paralympics, the National Under 23 Soccer team – Amaglug-glug, Vodacom Challenge, etc so I ‘cut my teeth’ on PR in the sports industry early on.

What was the defining moment that set your career on its way?

When I was 23, the owner of the company and my mentor then, Jodi-Ann Jones, emigrated and the company closed as I couldn’t buy it over, so the clients including Vodacom Sport, Paralympics, The Sports Trust, etc suggested that I should go on my own as they believed in me and would support me.

So I took the plunge, phew, and started my little business from my parent’s garage and have never looked back…. 17 years later I’m gratefully still going strong. I am so grateful to mentors and people like Mthobi Tyamzashe, Andy Scott, Selwyn Nathan and Brand de Villiers for believing in me when I was still a young woman and drowning behind the ears!

From a women’s sport perspective, what has been your greatest highlight?

I’ve been honoured to be the lead Press Attaché at two Olympic Games (London and Rio) for Team South Africa as well as the Paralympic Games and a number of Commonwealth Games too. Looking at other countries, this role is normally not filled too much (and so regularly) by a woman.

In addition, when I started out, we worked in a very male-dominated industry and it was quite difficult to be taken seriously, especially as I was blonde, haha and going into townships working on football even less so, but I pushed through trying to break the mould and stereotypes and hoped that hard work. Knowledge about sport and determination would show that women could also do the job!

“I’ve stuck around and seen how the industry has indeed evolved over the years where it now has women leaders.” – Roets on her journey and seeing women become leaders in the sports industry.

The highlight therefore is that I’ve stuck around and seen how the industry has indeed evolved over the years where it now has women leaders in federations, media, sponsorship, PR and Marketing positions which were almost unheard of when I first started out.

How have you dealt with challenges that have come your way?

I have a strong faith in God and turned to Him in every challenge. I also always believe in adapting and coming up with a plan B. No challenge cannot be sorted out.

What is the best career advice you ever received?

Start small in business and from a PR perspective, never say ‘no comment’.

Who are the PR greats you have looked up to throughout your career?

Richard Branson who is a PR machine with amazing PR stunts and ideas. Stephanie Cutter who was Barack Obama’s campaign PR manager for both elections – she is just amazing!  Also, Meredith O’ Sullivan – voted top publicist in Hollywood. I get lots of tips from her 😊

What is your advice to young women, starting out in sports PR?

Don’t be shy to start at the bottom or bother about fancy titles, rather learn everything you can, take every single opportunity, go the extra mile and remember that no matter what you do, people are watching! You never know when the right person is watching you and who will give you your big break!

Who are your favourite women in sport?

Of course my favs are Tatjana Schoenmaker and Caster Semenya  – no, I’m not biased – haha! Tatjana has incredible talent, a stunning person in and out and really has the world as her oyster! Caster, of course she is a super star who has gone through so much yet still always has a smile on her face. I have witnessed how she handles herself with such professionalism with media during many high profile games/events.

What is the state of women’s sport in South Africa and how can we improve it?

It’s a pity we don’t have more high profile sportswomen in SA. Being involved in school sport to some degree, I’ve noted we have a lot of young ladies participating in sport in schools, committed to training, breaking school records and then they disappear after that – something needs to be done to keep them in the sport. Not sure if they peak too early, or if they have other interests after school or the professional gender payment gap is too big that they find other opportunities but we lose a lot of sports women after school/tertiary and perhaps we need to look at how we can keep them from getting lost after they have studied.

What is the impact of gsport on women’s sport and how can we do more?

gsport is doing incredible things for women’s sport – wow! And, it’s lovely to see how it has just grown from strength to strength since the first years I attended the awards. The profile of women sport has been raised significantly through gsport and I think it’s just important to keep on, keeping on.

What is the best PR sports tip you can give an athlete that would hold her in good stead?

Be so careful about what you post online – your online footprint lives with you forever.

And, don’t be afraid of media, they also want the best for you as they need your content – they are there to tell your story, so use that!

What is the one thing you are good at that nobody talks about?

Not so sure I’m good at it, haha but I run an outreach at the women’s prison in Pretoria (Kgosi Mampuru Central facility) called Hands of Hope. We go into the prison monthly, where we chat and minister to the offenders, teaching them life skills including communication / PR skills / nail painting, and should they want we also pray with them. We make them feel loved when they are at their lowest. It’s amazing to see lives change as many women are in the prison for petty crimes because they just didn’t make the right choices in life. Everybody deserves a second chance.

My wish is that the world will be a lot safer! I wish for a cure for Covid-19 and I wish that all the athletes I work with will break their own PB’s at the Olympics in Tokyo, which hopefully then transpire into medals. Of course, wishing the Olympics goes ahead!

Photo 1 Caption: Pictured is Sports PR Consultant, Bronwyn Roets, who has played a part in uplifting the careers of many South African sports stars. Photo: Supplied