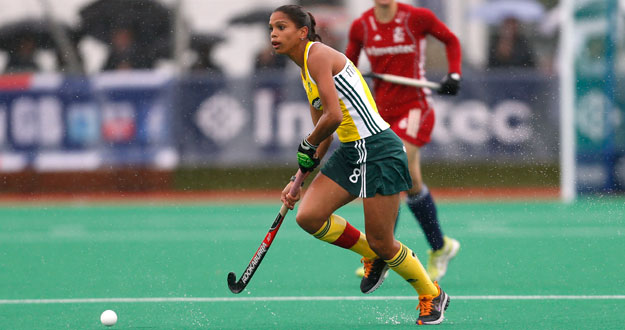 The Cape Town stage of the Investec South Africa women’s hockey team’s 2013 campaign will see Western Cape fans treated to four weeks of Test match hockey this month and next.

A four-match series against fellow London 2012 Olympians Belgium kicks off on Monday at Central Hockey Club, Vygieskraal, at 5.30 pm and will be followed by the World League round two competition from January 21 and capped off by the Investec Challenge, which will include London 2012 Olympic gold medallists Holland.

Team aspirations aside, iconic SA players Marsha Marescia and Pietie Coetzee are aiming for memorable milestones in their illustrious careers. Marescia, the SA captain, at 299 Test matches going into the series, is on the brink of the magical 300 Test match mark, while world record goal scorer Coetzee, at 248 goals in 250 Test matches, has yet another remarkable achievement in sight.

“The recent renewal of the team sponsorship with Investec allows us to build on the base of the past two years,” said SA head coach Giles Bonnet. “It affords us the opportunity to implement the key learnings from London 2012 and to focus our energies and impetus in an intense 12-month period aimed at increasing the team’s high performance, with select specialists and service providers to leverage the quantum leap we need to make.”

The SA team assembled in Cape Town Thursday and apart from wanting to succeed in the Belgium series, Bonnet is looking to qualify for the semi-finals of the World League in Europe in June by finishing in the top two of World League round two in Cape Town and to implement a focused high-performance strategy within the next six months.

One-off internationals against the other Investec Challenge participants are lined up for SA at the end of this month, against Australia, Holland and London 2012 bronze medallists England (Great Britain). This before the cherry on the top of the hockey extravaganza sees the Investec Challenge event, taking place from February 4 to 10 at Hartleyvale Hockey Stadium.

“It has been a while since the national women’s team has performed in Cape Town and we intend to play an aggressive brand of direct hockey with an emphasis on pressure and speed that is sure to please Western Cape fans,” said Bonnet.