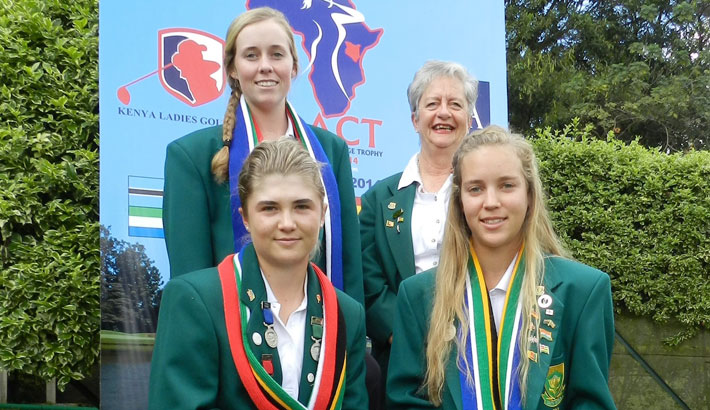 Michaela Fletcher and Cara Gorlei strengthened South Africa’s title defence bid at the All-Africa Challenge Trophy (AACT) in Nairobi, Kenya, on Wednesday, 11 June, 2014, when the pair combined for a team total of 148 in the second round on Wednesday.

The South African team lagged one shot behind Kenya after an opening round 146, however Fletcher’s 73 and a 75 from Gorlei handed the defending champions an eight shot lead over the host nation at the Muthaiga Golf Club in Nairobi.

Fletcher picked up a birdie at the par-five ninth to turn in one under, but the KwaZulu-Natal golfer bogeyed the 10th, 12th and 14th on the homeward stretch of the challenging layout.

Gorlei from Western Province had two double bogeys, two drops and three birdies on her way to 75, but the 17-year-old Milnerton golfer still tops the Individual Leaderboard on one-over-par 145.

Gorlei is three shots ahead of second round playing partner, Josephine Ainley from Kenya, who returned a second round 76.

Fletcher and compatriot Magda Kruger, who posted a non-counting 76, are tied for third on 152.

Photo 2 caption: Michaela Fletcher from KwaZulu-Natal carded a second round 73 to boost the South African team to the lead at the All-Africa Challenge Trophy at Muthaiga Golf Club in Kenya. Photo: AACT Kenya