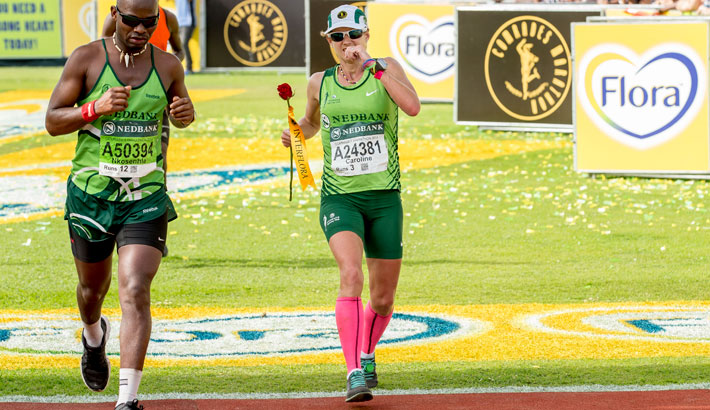 Midrand runner Caroline Wostmann has admitted that she did not expect to be the first South African woman home at the Comrades Marathon on Sunday in the 89.28-kilometre “down run” from Pietermaritzburg to Durban in a time of 6:51:43.

Speaking on Game On on 2000FM earlier this week, the Wits lecturer and mother of two recalled the torturous route which led to her sixth position finish, the best of four local ladies in the top ten, with Russia and Great Britain dominating the top five positions ahead of her.

Wostmann said: “Half an hour into the race, I was just feeling so hot, and when we got to Fields Hill, it got incredibly hot. But I think just knowing that everyone is going through to the same conditions, so if you are suffering you know everyone is suffering as well!

“I knew I had to keep going and stick to my plan.”

She describes the feeling of entering Sahara Stadium Kingsmead, and the amazing atmosphere which carried her across the line. “It was absolutely incredible. I was struggling so much in those last 10 kilometres. I started cramping, and I just had to keep moving forward.

“When I got there and I heard the crowd screaming, as much as I just wanted to walk and my legs didn’t want to go, it was just so uplifting to hear everyone screaming for me to come in, hearing the announcers saying I am the first South African woman.

“It was just such an amazing experience, it definitely does give you that push to go to the end!”

The race was won by British born Canadian resident Eleanor Greenwood, who broke the stranglehold that the Russian twins, Elena and Olesya Nurgalieva have had over the race since 2002.

“I think it was absolutely amazing that Ellie did manage to win the race, and take that from the twins. She is such an amazing person, and she really deserved the win. Just watching her at the end – I saw it on the news last night, she just looked so strong with such an amazing victory,” said Wostmann.

Wostmann was one of four South Africans to finish in the top 10 in the women’s race, with long-distance legend Zola Budd Pieterse in seventh position, Martinique Potgieter in ninth and Julanie Basson in 10th position.

Wostmann says her Comrades Marathon has changed her life overnight. “It’s been an amazing experience. I actually have received a couple of emails from my students congratulating me, which was really nice that they were watching the race and they actually know who I am!

“I was joking with my husband that maybe they will listen to me more now, when I am busy teaching them,” she laughed.

Main photo caption: The first SA woman home in the 2014 Comrades Marathon, Midrand runner Caroline Wostmann, credits the amazing spirit along the way, and at the Kingsmead stadium finish line, for powering her through the amazing achievement. Photo: MMPhotoSA

Photo 2 caption: Wostmann gave credit to British-born Canadian resident Eleanor Greenwood (pictured), who broke the stranglehold that the Russian twins, Elena and Olesya Nurgalieva have had over the race since 2002. “She is such an amazing person, and she really deserved the win. Watching her at the end, she looked so strong with such an amazing victory,” said Wostmann. Photo: MMPhotoSA

Photo 3 caption: Wostmann was one of 4 SA to finish in the top 10, with long-distance legend Zola Budd Pieterse (pictured) in 7th position, Martinique Potgieter finishing 9th and Julanie Basson in 10th position. “I would like to think that there are some really strong SA ultra-distance runners coming through, and I do like to think that in the next few years we can have a South African winner,” said Wostmann. Photo: MMPhotoSA