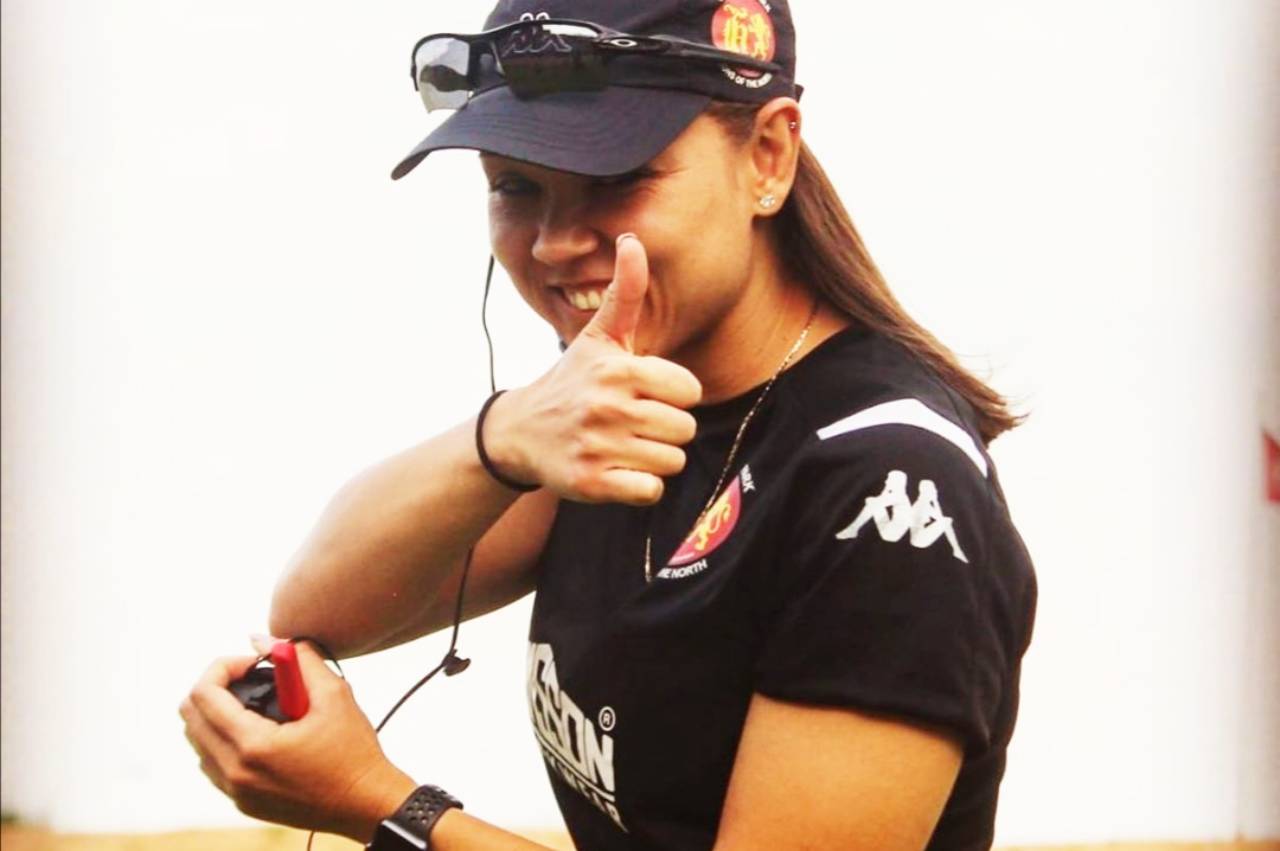 Simone Conley is enjoying a successful career as the Fitness and Conditioning coach for ABSA Premiership club Highlands Park, but there is much more to this talented former badminton star.

Conley, who has a BCom Sports Management Degree and a Master’s Degree in Biokinetics, previously worked with the South African Football Association as well as with the men’s national soccer team, before joining Highlands.

She says that it was easier for her to command respect and gain trust of the players at club level due to the national experience that she had gained over the years.

Speaking to Celine Abrahams, Conley talks about her love for sport, why she chose football and offers advice to young girls on how they can be successful in a male-dominated industry.

Simone, where did it all start for you?

While doing my internship in Biokinetics I realised that I would prefer to ply my trade in sport and not just in private practising or in the general person who has a chronic condition, an orthopaedic injury, or a neurological problem, I’d prefer to be more sports specific and that’s when I decided to branch off and apply to study my Master’s Degree in Biokinetics.

In my Master’s I focused on football specifically injury prevention and conditioning. I did my Master’s study at SAFA School of Excellence that is basically where I got my foot in the door. I did some voluntary work there, trying to help some of the players that I screened and assessed which was part of my study.

I had more than 100 players that I assisted. Being fortunate enough to do my Master’s study at the School of Excellence, I met coach Khabo Zondo (South Africa coach). He recommended me for the Nedbank Ke Yona team search project where I met coach Shakes Mashaba, coach Owen da Gama (Highlands Park coach) and coach Mike Mangena.

They saw my potential and that’s when I got a national team call-up with the U20’s with Thabo Senong, U23’s with coach da Gama where we went with the team to the Rio 2016 Olympics and with Bafana Bafana.

That’s basically where I started creating a name for myself in the industry. People started to know who I was, what I do and what I can do.

When coach Owen was signed as the head coach of Highlands Park, he asked me if I would be interested in going into NFD football (at the time Highlands were competing in the National First Division before winning promotion into the PSL). I took the opportunity and grabbed it with both hands.

When did your passion for sports begin?

My passion for sports has always been avid. I played sports in primary school, that was my favourite part! School was school but sport was school for me (laughs). I achieved many sporting accolades; I was an outstanding sports woman. Badminton was my main sport, but I played netball, athletics, tennis, soccer, hockey, I did a little bit of everything. I achieved national colours for badminton. I was supposed to go to the Commonwealth Games but unfortunately Badminton South Africa did not have the finances to send the team. For netball, I achieved Gauteng Provincial colours.

What has it been like to work in a male-dominated industry?

I always get this question (laughs). I am in this industry but choice, I’m in this industry by the desire to breakthrough into a male sport within South Africa. I did previously work with Lions rugby team (U19 and U21) but that’s where I realised that rugby is sort of a well-oiled machine and I wanted to be a niche in an industry and I looked into cricket and realised that they are quite sorted as well then I saw that football was where I could be a niche and I can set up something that has not been tapped on.

Being in this industry is not easy. As a woman you have to work harder than your male counterpart. It’s tough, you have to command respect, you’ve got to show the guys that you know what you are doing, show them that you can help them, you can add to building their careers, you can add something of value.

I think what has helped me being in the PSL is the experience I do have at national level, the fact that I have travelled overseas, and I have been in contact and seen how other international teams work. The fact that I have worked with the cream of the crop in South Africa, I walked into a PSL team with a good CV behind my name and that’s why I got the respect.

I studied and worked hard to be where I am, why should I be judged because of my gender?

For those who watch soccer, they would know that Highlands Park players boast the best fitness levels in the local league. What programmes do you have in place to keep these players in tip-toe form?

Yes, people do say that Highlands Park is one of the fittest teams and I am honoured and grateful for that compliment. I am responsible for their fitness but I am still learning, I’m still compiling methods and growing within this industry so I can’t say what I am doing is one hundred percent solid but I think I have found a periodisation model that works for this team.

Right now in terms of the types of programmes I can’t really describe them to you but what it basically is about is the periodisation, a load and recovery methods of sports science if you understand that then that’s how you get fit. Loading continuously will not get you fit. You can’t train at the same tempo every day; the tempo must vary from medium load to high load to low load to rest days and that is basically the recipe that I use.

More than physical training, we understand that the mental aspect plays an essential part as well. Please explain to us how you deal with mentally preparing athletes, especially during challenging times?

It’s hectic but I play a very small role with regards to that. I think that falls very much onto firstly the captain of the team because they are the closest to the players and secondly the coaching staff. I do feel though that I have had an impact on the mental space being the only woman as I see things differently, I view things differently and I motivate and encourage differently in comparison to my male colleagues.

With the situation that we are currently facing with the COVID-19 global pandemic. What programmes have you put in place for the athletes that you manage?

Yes, this is a challenging time and it’s not easy especially knowing that 21 days could be extended. I’ve opted to deal with the prescription of programmes daily because I do not know when the lockdown is going to end, and we also don’t know when after lockdown we will play a game.

We are doing online sessions where I can see our players doing the workout, I can guide them, facilitate, I can see the intensity and then plan for the next day.

What tips would you give to all athletes across various sporting codes when it comes to training on their own?

One of the biggest tips is to find someone who can encourage you, has the expertise and knowledge. You must have certain measures, goals and objectives and periodisation principles. I think to find a mentor to help you out is the best way to go.

As the first and only female fitness trainer in the PSL, what advice would you have for other young girls who are looking to follow in your footsteps?

You really must have a passion for sport and you going to have to want to work in the male-dominated industry. Another thing is that being a female you have to go that extra mile, do something that is out of the ordinary so that you can be noticed and so that the opportunity and the door can open for you.