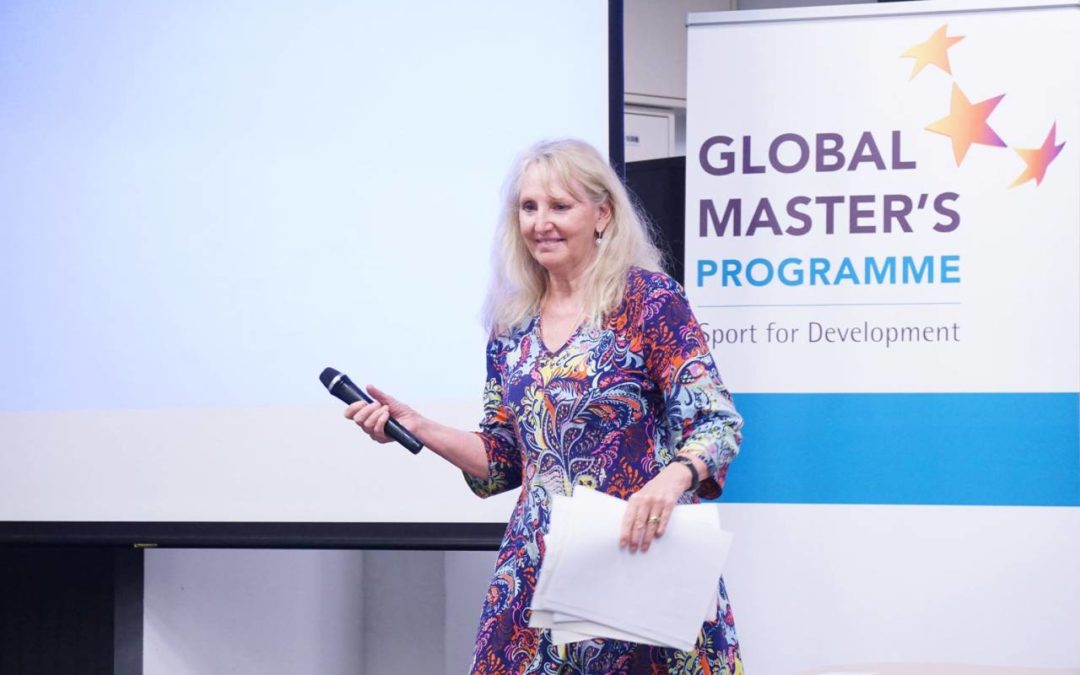 In 2017, Professor Cora Burnett-Louw was recognised for her outstanding academic contribution to women in sport when she was honoured as one of five Ministerial Award winners at the gsport Awards.

As a leader for national research projects within South Africa and the rest of Africa, Professor Louw’s mission is to ensure that the University of Johannesburg becomes a vibrant hub of research in the field of Olympic Studies.

Professor Louw is a National Research Foundation-rated researcher and holds two doctorates, one in Physical Education and one in Anthropology.

Her career highlights include developing a Sport for Development Impact Assessment Tool and presenting it at the UNICEF Head Office in New York, the publication of ‘Stories from the Field’ and co-authoring a textbook ‘Sport in Society: Issues and Controversies’ with Jay Coakley.

Speaking with Celine Abrahams, Professor Louw gives an in-depth explanation about her research projects over the years, her passion for sport and aiming to promote women’s sport more.

Prof, as a Senior Research Professor at the University of Johannesburg, please enlighten us on your position and duties.

In this day of specialization, I am fortunate to be the Director of the Olympic Studies Centre at the University of Johannesburg. This is one out of 38 globally and the only one in Africa. It gives me the freedom to focus on internationalization and also to concentrate on post-graduate supervision, as well as leading national research projects within South Africa and other African countries.

Another key initiative is the Global Masters Programme in Sport-for-Development that started two years ago in collaboration with the University of Utrecht (in the Netherlands) and Tsukhuba University (in Japan). The focus on ‘development issues’ (including women empowerment) affords me the opportunity to lecture internationally, for instance in South Korea, the UK and Europe. I just hosted a PhD student from Italy for six weeks to share new and innovative methodology.

The Olympic Studies Centre in collaboration with the Department of Sport and Movement Studies at the University of Johannesburg, also hosts the Global Observatory for Women, Sport, Physical Education and Physical Activity. We also have an archive of more than 3,500 documents of Apartheid and Sport collected at the IOC archive in Lausanne since 2015.

What inspired you to become a researcher?

The passion for knowledge and being very inquisitive about people from all walks of life and how they negotiate their lives and make sense of it. My first masters’ degree was in choreography and also my first doctorate was about dance ethnology. Then, my real journey started as I studied the dances of the Venda and became fascinated by anthropology. This led to another PhD about gang violence and the link between poverty and violence – exposing the underbelly of township life. Then my journey continued to return to sport and I did another masters in Olympic Studies at the German Sports University in Cologne.

Academics can only be relevant if they can contribute to meaningful knowledge that can translate into improving the lives of others.

Where did your passion for sport come from?

When I was at school and throughout my varsity years at Stellenbosch, I played tennis and netball at provincial level. I also did athletics, but my real love was tennis and dancing. But, coming from a small rural town in the Northern Cape, there were not so many opportunities – I guess you would call us ‘relatively disadvantaged’. So, sport was not only the competitive version, but many afternoons we would play on the make-shift fields all kinds of games. When I led a national research project on Indigenous Games in 2002, I fondly remember many of the games we played that were among the 555 that was collected across South Africa.

There was a study that you previously completed titled “Women in Sport”.

After ten years of democratic rule, I was asked to conduct a national study on the status of women and girls’ sport participation in South Africa. It was a landmark study and if you read the report, so many gender-related issues and inequalities were already entrenched 15 years ago. Then I supervised several PhD studies relating to gender in sport and society. I am still pursuing her- story within the history of sport and within the broader community life of impoverished communities.

What inspired you to dig deeper into the state of women’s sport?

It is about sisterhood and how knowledge can bring agency and change. When I did research for the Commonwealth Games Association’s Development Committee in 2014 in Glasgow and in 2018 in the Gold Coast, I observed how powerful women can be and how they have the compassion, dedication and ethic of care. I am at awe of how resilient women can be and how they successfully negotiate many roles.

What were your findings?

There are so many observations that remained the same. Many structures in society, in communities, schools and households are still suppressive and taken as the accepted status quo.

Women and girls are still vulnerable and not the mistresses of their own destinies. Gender oppression and sexism is not a case for women – it is a societal issue. Too many ‘empowerment programmes’ are mere window-dressing leaving women at the mercy of structural oppression, whilst programmes and strategies addresses individual level change. The subtext is very much neo-Colonial and patriarchal in nature that leave women and girls at the lower end of societal reform.

Girls and women are having a tough time to enter into traditionally male sports like rugby, cricket and football. Sport has a key role to play to create a different consciousness of a different embodiment of gender and challenge traditional perceptions and norms informed by homophobia and a binary construction of gender (either male or female).

Since your report, has the state of women in sport changed in South Africa? If yes, what has changed?

In the past 15 years, much changed at the forefront of elite sport as female athletes like Caster Semenya made a huge stride in how people viewed gender. Our female athletes are celebrated, but the discrepancy of inequality persists. Women and girls are still disproportionally represented in decision-making structures. National identities are still formed in association with male athletes as role models and media exposure given to traditionally male sports. The culture of sport in South Africa still has a very masculine face.

What do you think needs to be done to rectify these indifferences?

The media has a huge role to play to change the way they mediate the reality of female athletes. Often media persona objectify female bodies and celebrate an athlete as a ‘good mother and wife’ – a role model to young girls. The media should portray females as athletes first regardless of the baggage of hetero-normativity.

I have evaluated brilliant programmes by NGOs, but these good practices are not widely disseminated.

We need our teachers to be aware that gender-mainstreaming in physical education classes may actually disenfranchise girls. It is about educating the educators so that all children can receive equal and fair treatment, and most important to change the way people think and behave.

As part of making a useful contribution, initiatives like gsport have developed to give a platform to promote women’s sport. What to do you think of these institutions?

I truly comment their efforts, but again such platforms and initiatives should enjoy much more exposure. I think gsport should explore multiple innovative ways of reaching out to youth and to the broader public. I would like students to learn and be involved in more targeted initiatives, to get more sponsors involved and to create a social movement for change.

What are you doing to play your part in promoting women in sport?

I am mostly conducting research and writing academic articles. This is important but not enough. I still have to find a way how to be a better public socialist and add my voice to those in the front line of gender activism. I try to attract post-graduate students in the field of gender studies and promote young academics to advocate for women’s rights.

In all the bigger projects, like the two recent national research projects on ‘The state and status of physical education in South African public schools’, and ‘The state and status of school sport in South African public schools’, I will design methodology and ensure that the findings include ‘gender issues’ and a comparative analysis of girls’ and boys’ participation and (mostly differential) access to resources.

Please tell us more about the YDF project.

This was a project that was implemented around the 2010 FIFA World Cup in ten African countries. The German Development Corporation (GIZ) obtained funding from the German Government and the European Union to implement a programme Youth Development through Football. The initiative capitalised on developing a policy framework that would speak to the then Millennium Development Goals (post 2015, the Sustainable Development Goals). It addressed girls’ and women’s empowerment within and across different sectors such as that of government, corporate (e.g. Nike CSI), civic society (NGOs) and the sport fraternity.

I was involved in their impact assessments for about seven years and observed how the programme focused on gender equality in providing boys and girls with opportunities to take part in football, learn life skills and develop leadership. When they left Africa, their life skills programme became part of the Licence D football coaching certification. They also developed the Sport for Social Change Network Africa that currently has 110 NGOs as members and receive government funding to promote sport-for-development in Southern Africa. The newest initiative of this network is to host a global platform where research is packaged for practitioners and where prominent debates in sport-for-development can take place. I am involved in packaging the material where ‘gender in sport’ is one of the main categories.

What advice do you have for young girls who are looking to make a difference to uplift women’s sport?

Girls should be gender-minded and focus on agency. They should believe in themselves, appreciate their uniqueness as athletes, managers or journalists and to expose all kinds of discrimination and not shy away from leadership roles. They should be radical in their approach, bold in their conviction to bring about a fair and gender-informed dispensation in whatever role they find themselves. There is no universal recipe – just find your voice and use it strategically and wisely.

Photo 1 Caption: As a leader for national research projects within South Africa and the rest of Africa, Professor Cora Burnett-Louw’s mission is to ensure that the University of Johannesburg becomes a vibrant hub of research in the field of Olympic Studies. Photo: South African Embassy (Facebook)