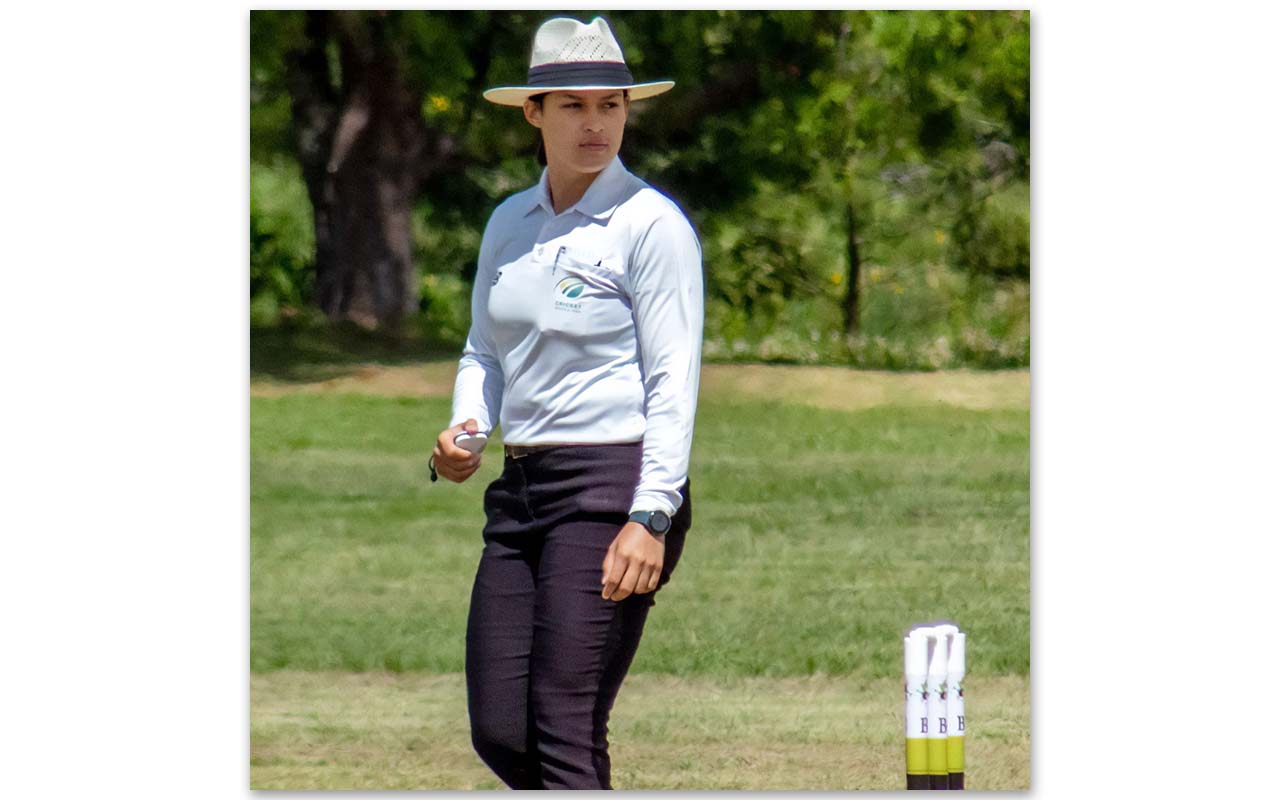 Klaaste began her umpire career teaching herself some of the technical aspects of the game as she was aiming to improve her skills as a player, however, she realised there was a demand for female umpires within the cricket environment.

She recently made history becoming the first female umpire to officiate in a league final at the Six Sun Grill SWD T20 in Oudtshoorn and is aiming to build on her experience.

Following her success, the former cricket player was then selected to officiate at the CSA National Clubs tournament in January 2022, however, she has had to withdraw due to work commitments.

Hi Kerrin, thank you for chatting to us. Please tell us about yourself and where you are from?

Hi Tlamelo. Thank you for the opportunity to give you some insight to umpiring from a female’s perspective. I’m originally from Kimberley in the Northern Cape although I’ve just recently moved to Knysna, so I now represent the South Western Districts (SWD).

Congratulations on becoming the first female umpire to officiate in a league final. Please tell us about the experience.

Thank you so much! Before I umpired the game, I was told that it would be the first time a female stood in the play-offs of the SWD club league, so there was an immediate target on my back.

That barely hindered me as I saw it as a challenge that I was more than capable of tackling.

Both games took place in Oudtshoorn. It was my first time umpiring at those grounds, too. As always, there will be a player who believes that they know better, especially when they’ve also umpired before, so I’m open to criticism. He constantly gave me a mouthful about my decisions and questioned my qualifications.

He was simply a reminder of how much I’ve grown since I’ve started.

A few years back I wouldn’t have been able to assert myself the way I did. Regardless of his opinion, the play-offs were amazing and only the tip of the iceberg of what’s to come.

Where and when did your love for sport begin?

I’ve been an avid sportswoman for as long as I can remember so there’s always been an underlying tone of passion behind my interest in sport. Regardless of whether it was playing, coaching, or umpiring, involvement and contribution was the key.

You could’ve been a player but here you are as a cricket umpire. Please tell us about your decision to take the umpire route.

Initially I started umpiring to teach myself to pick up the line and length of the ball because I struggled with it as a player and umpiring would force me to zone into that aspect.

“Once I started umpiring, I realised that there is a massive demand for females within this environment.” – Kerrin Klaaste, SWD Emerging Cricket Umpire

With that came several opportunities on various platforms and across all age groups. That resulted in an immense amount of growth as an emerging umpire. I’ve had exceptional mentors since the very first day and the only thing they wanted in exchange was a return on their investment, therefore I don’t plan on stagnating.

Please tell us about the first match you officiated. What was it like?

I felt extremely unprepared, nervous, and incapable of being able to make it through the game because it was a premier league game back in Kimberley. All I had to do was stand at square-leg, and the only thought going through my mind was that I didn’t want to mess up any of the fielding restrictions or miss a run-out.

I didn’t have half of the required umpiring tools in my pockets, nor the correct attire, but I had a clicker and a hat, so that was enough to get me through the game!

The guys were quite accommodating so that put me at ease. They knew it was my first game, so they guided me throughout.

Who are some of the sports women you admire?

Denisha Devnarain doesn’t know it, but I’ve got an immense amount of respect for her drive and passion. She’s one of the most iconic and influential females in the cricketing environment for several years now and I’m extremely keen on seeing what an impact she’ll make.

There aren’t a lot of women in match officiating. How can we make them aware that there’s a space for them too?

By starting in the lower leagues, the ladies will build the required confidence, technique, and skill to officiate higher up in the pipeline.

They’ve re-introduced the national girls u16 week, which has created more opportunity for emerging female umpires to climb the ranks.

In addition to the other prerequisites to be premier league club teams, they could make it mandatory for them to be equipped with at least one female umpired provided that the union is able to provide the sufficient training for the women.

You were selected to officiate at the CSA National Clubs in January 2022. How do you feel about the national level recognition?

I am immensely grateful for the selection to officiate at the CSA Clubs week in January, however I’ve had to withdraw due to work obligations since it’s the busiest time of year for my company.

I am extremely gutted about not being able to participate, but I firmly believe that this simply means more time to prepare for another opportunity. Minor setbacks always result in major comebacks when you’ve got the correct mindset, so I’ll keep grafting.

What is the one common myth about your profession that you want to make clear?

As cliché as it sounds, female umpires are immediately undermined in a male-dominated environment such as this.

As you earn their respect, your confidence will slowly grow until you realise that you’re there to enforce the law, playing conditions, and not get A’s on your captains report.

In another lifetime, I probably would’ve pursued being a professional hockey goalkeeper.

What do you hope to achieve in your career?

I would love to umpire at a World Cup!

To join the ICC Umpires Panel.

For starters, a massive thank you for all that you as gsports4girls have already achieved thus far. The media coverage has been phenomenal, and your efforts haven’t gone unnoticed.

I speak under correction, but more contracts are on offer to players which is an incredible step when you’re playing in the B-section provincial team, and not in the top 6.

In addition to that would be to rope in media coverage such as PitchVision at the provincial games. Unions also need to be more involved in promoting their female teams, and not only their men’s teams.

Overall, I do believe that we’re edging closer to being placed on the same level as the men, but it will take years before the word equal could be used.