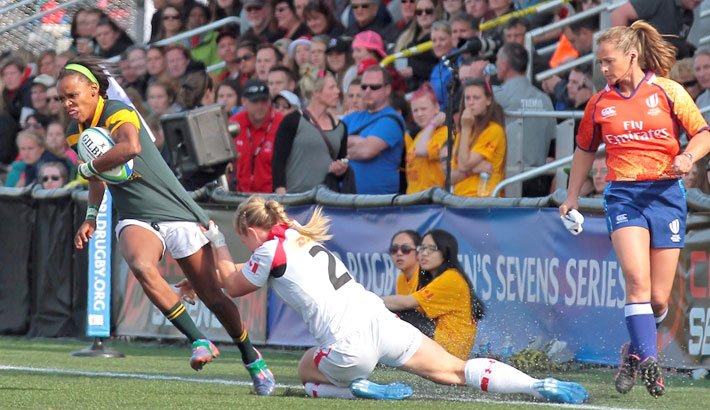 Springbok Women’s Sevens coach Renfred Dazel on Wednesday made two changes to his team for the England Sevens at The Stoop in London on Friday and Saturday, which marks the penultimate round of the 2014/2015 Women’s World Series.

Nosiphiwo Goda and Zaandre Theron, who last featured in the Atlanta Sevens in March, reclaimed their places in the 12-member team, while Lorinda Brown and Sunelle Barnard have been rested in a rotational switch.

South Africa will face hosts England, Canada and Russia in a challenging pool draw on Friday.

“It was tough to select only 12 players, especially since we have a touring squad of 14 players,” said Dazel. “But we have selected the team that we thought would be best suited for this competition. We have another testing pool round and we would like to show an improvement in our performances so far in the competition, so we need to be ready for the challenge mentally and physically.”

Dazel was pleased with the team’s final preparations this week in London and said they hoped to build on their showing in Canada last month.

“We know what we are in for this week,” said Dazel. “England will want to prove a point in front of their home crowd, and a victory could push them into a favourable spot to qualify for the 2016 Olympic Games. Canada and Russia have also proved themselves this season, and while Canada will do their best to remain in the top two on the log, Russia will draw confidence from the fact that they advanced to the final in Canada. But that said, we also have a point to prove as we haven’t performed as well as we would have liked to this season and we are in a position where we have nothing to lose.”

Zoning in on their game, Dazel said: “Our defence, in particular, has to be solid and we have to make our one-on-one tackles. We also need to convert our point-scoring chances into points. We certainly improved in these areas in the last tournament, and if we can build on that we will give a better account of ourselves.”

Springbok Women’s Sevens Pool Fixtures* at the England Sevens, 15 May:

* Reflects SA times, one hour ahead of London

Photo 1 caption: Phumeza Gadu for the Springbok Women’s Sevens struggles to make headway against Canada in the Langford, Canada round of World Rugby’s Women’s World Sevens Series, on 12 May, 2015. The South Africans suffered a 47-0 defeat to the home side, in a tournament that saw them without a win. Photo: Judy Teasdale