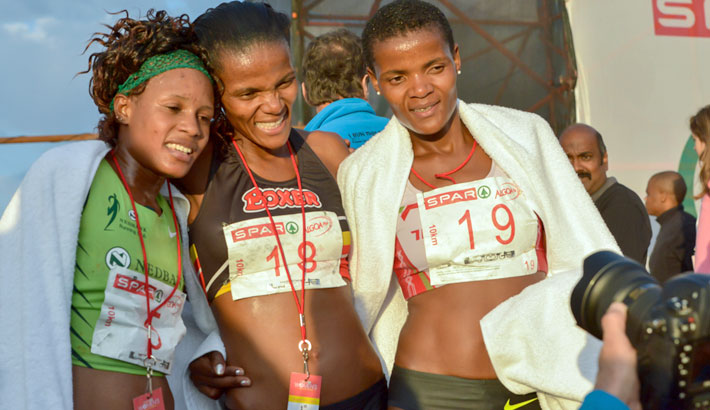 Defending champion Diana-Lebo Phalula made sure of victory in the Port Elizabeth leg of the SPAR Women’s 10km Challenge at Pollok Beach on Saturday, winning the race in emphatic style in 32.57 minutes.

Her twin sister, Lebogang, was second in 33.26, with Rutendo Nyahora third in 33.43.  Mapaseka Makhanya, who won the opening leg in Cape Town in March, was in eighth position. Makhanya recently finished third in the Hanover Marathon in Germany, and was still feeling the effects of the marathon.

Nyahora took the early lead, but Diana-Lebo Phalula, running barefoot, surged to the front after the first kilometre mark, and stayed there for the rest of the race.

“My body was feeling good, and so I decided to go for it.  I wanted to help my sister, but she couldn’t keep up with me,” said Phalula.

“I am a bit disappointed in my time, because I wanted to break the record again, but I knew I had to defend my title.  The Port Elizabeth race is always one of my favourites.”

Lebogang Phalula, who ran with Nyahora for much of the way, said she had enjoyed the race, although there had been quite a strong wind.

“But I’ve been doing weight training, so I told the wind I’m not going to let you blow me over – I’m strong now,” she said.

She said she had tried to keep up with her sister, but Diana-Lebo had gone too fast for her.

Zimbabwean Nyahora dedicated her third place to the victims of the recent xenophobic violence in South Africa.

“I was determined to finish in the top three so I could make a statement on behalf of the people who have been killed, injured or displaced by the violence,” she said.

“I was running for them today, and they were in my thoughts throughout the race.”

The Phalula twins and Nyahora will all be running in the First National Bank 12km race in Cape Town next week, against some top international runners, including former world champion Vivienne Cheruiyot of Kenya.

Former Grand Prix winner, Irvette van Zyl, who is expecting a baby in September, was delighted to finish in ninth position.

Leading Results of the SPAR Women’s 10km Challenge, at Pollok Beach in Port Elizabeth on Saturday, 9 May, 2015:

Photo 1 caption:  Defending champion Diana-Lebo Phalula made sure of victory in the Port Elizabeth leg of the SPAR Women’s 10km Challenge at Pollok Beach on Saturday on Saturday, 9 May 2015. Pictured are the top three finishers at the Port Elizabeth (from left) Rutendo Nyahora (3rd); Diana-Lebo Phalula (1st); and Lebogang Phalula (2nd). Photo: Mark West

Photo 2 caption:  Diana-Lebo Phalula celebrates her win as she crosses the finish line first at the SPAR Women’s Challenge race to Pollock Beach, winning in emphatic style in 32.57 minutes, in Port Elizabeth on Saturday, 9 May 2015. Photo: Mark West