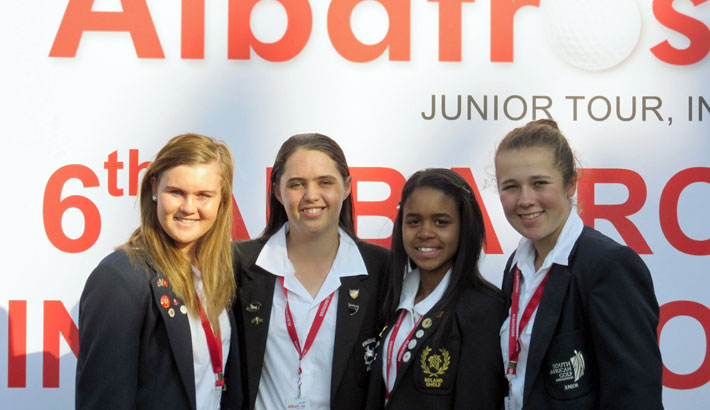 De Lange rallied after an opening 80 with birdies at three of the par fives at the tough championship layout to take the 36-hole lead at 153 with a one-over-par 73. The 16-year-old Goldfields player closed with a 75 to claim a six-stroke victory over local favourite, Amrita Anand.

Gauteng North’s Danielle du Toit carded rounds of 82, 73 and 81 to tie for third on 236 with Sasikarn Somboonsub from Thailand.

Onkanok Soisuwan from Thailand claimed a wire-to-wire victory on a winning total of six-over-par 222 with rounds of 73, 78 and 71.

De Lange was delighted to draw the curtain on a great season with victory in India.

“The course was incredibly tight and the rough was really brutal,” she said. “You really had to keep it in play on those narrow fairways or pay the price. We also found that we hit the ball at least 10 meters shorter over there, so we constantly adjust our club selection during the tournament.

“The greens were probably the hardest I’ve ever played, but it was really good experience to learn how to cope with those conditions. Unfortunately I just made the one birdie in the final round, but I am proud that I kept the bogeys to a minimum and held on to win.”

De Lange burst on to the junior golf scene when she won the Women’s A and Overall Divisions at the Sanlam Cancer Challenge National Final at Sun City in 2011.

Earlier this season the Fochville teenager represented South Africa alongside Eleonora Galletti in the Africa Youth Games in Botswana. As the lone South African amateur left in the field after the cut in the Cell C SA Women’s Open, De Lange impressed when she rallied in the final round to tie top French amateur Mathilda Cappeliez and the pair shared the Jackie Mercer Trophy as the leading amateurs in the professional women’s event.

“I am incredibly grateful that Womens Golf South Africa gave me these opportunities and didn’t give up on me when I was performing poorly early in the season,” she said.

“Teeing it up in Botswana, at San Lameer and in India really got my competitive streak going again and it fed through to my game. I think the biggest leap has been on the mental side. When other people believe in you, you stop doubting yourself and you start trusting your swing again.

“The last few months have been incredible and I am very excited about the 2015 season.”