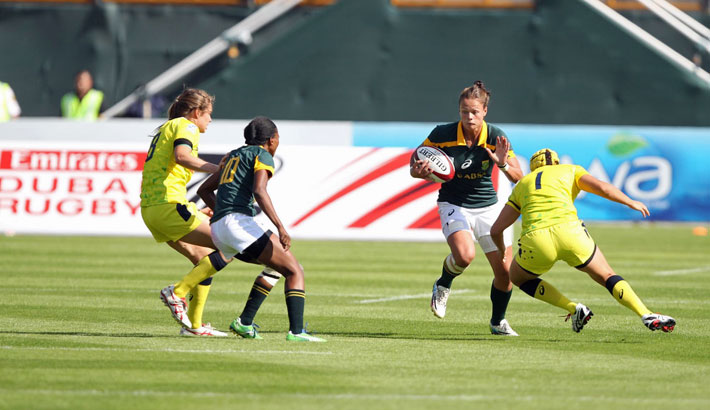 The Springbok Women Sevens on Friday went down 17-7 against Brazil in the Bowl Final at the Dubai World Rugby Women’s Sevens Series in a disappointing finish to the season-opening tournament.

The team started the final day’s play with an encouraging 17-0 victory against China in the Bowl Semifinal, but similar errors to those on the opening day cost them in their final match against 2016 Olympic Games hosts Brazil.

Lorinda Brown, Veroeshka Grain and captain Marithy Pienaar all scored tries against China, with Pienaar converting one of them for their 17 points.

They supported this with a fine defensive effort, which denied the opposition from scoring a single point.

They were unable to replicate this form against Brazil as errors at crucial times combined with the opposition’s ability to retain possession for long periods forced them onto the back-foot from the outset.

Brazil made the most of their possession and scored two tries in the first half, one of which was converted, for a 12-0 lead at the break.

They built on this in the second half by scoring their third try as they capitalised on a lost lineout by the Springbok Women to extend their lead to 17-0.

Pienaar, however, scored a converted try in the dying minutes after a good attacking spell by the Bok Women, which allowed them to reduce the deficit to 17-7. But with the clock winding down fast, the team was unable to add to their score.

The team also struggled on Day 1 of the competition, suffering defeats against Australia and France and registering a draw against Spain.

The team had a baptism of fire as they faced defending champions and 2013/2014 World Series runners up Australia in their opening match, and with confidence and momentum favouring the Australians they picked up where they left off last season.

The side from Down Under was particularly effective at retaining possession and taking advantage of penalties, which allowed them to stamp their authority and force South Africa to defend for most of the match.

With slick handling skills and solid support play, Australia tested the Springbok Women’s defence and did well to find space out wide, which earned them six tries for a 36-0 victory.

Errors at crucial times by Renfred Dazel’s team did not assist their cause with knock-ons, penalties, lost lineouts and their failure to protect the ball at the rucks denying them from making their presence felt.

These errors also cost them against France and Spain.

The clash against Spain was tight as the teams threw everything at one another, but two tries by Bok Women’s speedster Phumeza Gadu in the first half to only one by Spain handed South Africa a 10-7 lead at the break.

Spain bounced back shortly after play resumed and took advantage of a penalty by spreading the ball wide, which allowed them to sneak into a 12-10 lead.

This, however, was short-lived as Gadu caught two defenders flat-footed and ran outside to complete her hat-trick and push the team into a 17-12 lead in the dying minutes.

An unconverted try on the stroke of fulltime by Spain, however, levelled the scores at 17-17 at full-time.

France, meanwhile, showed patience and skill on attack and supported this with a solid defensive effort, which earned them four tries to only one by Springbok Women’s Sevens captain Marithy Pienaar for a 24-7 victory.

With France’s defence holding well Pienaar chipped ahead and managed to gather it to touch down for their only try of the match.