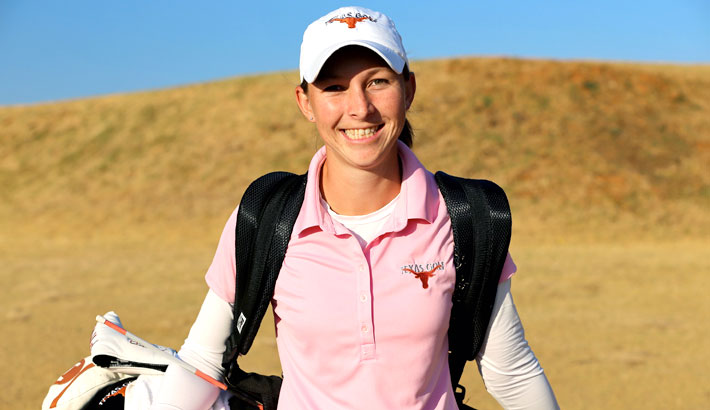 Koster golfer Bertine Strauss is primed for her third appearance in the Astor Trophy at The Grange in Adelaide, from 12-16 January 2015.

The University of Texas student made her debut in 2007 and helped South Africa to a third place finish at Royal Johannesburg and Kensington, and was a member of the 2011 team that took third at Fairhaven Golf Club in Lytham St Annes in England.

“This time I believe it will be third time lucky and we can bring the trophy home,” said Strauss, who will line up with Michaela Fletcher from KwaZulu-Natal and Gauteng golfers Lora Assad, Ivanna Samu and Eleonora Galletti for South Africa.

The 22-year-old came home for the festive break, but before she caught up with her family and friends, Strauss attended a WGSA training camp at Ruimsig Country Club with her fellow team mates to work on the Foursomes pairings for the tournament.

“The format is match play with Foursomes and Singles each day,” Strauss said. “The Foursomes pairings plays a crucial role and Great Britain and Ireland with their Curtis Cup players have proven in the last two events that well-oiled partnerships put points on the board.

“We worked extremely hard on our combinations during the training camp and I personally believe we have a really good chance to scare the top nations this year.

“We have some long hitters and some great putters, and I think our pairings are solid. We may have to adapt our pairings once we see the golf course for the first time, but right now we are quietly confident that we have a strong team that can match those of the other nations.”

Strauss was the country’s top ranked amateur when she left to take up a golf scholarship at the University of Texas in 2011.

A clutch of top five finishes kept her at the number one spot in the rankings and she finished the season as Womens Golf South Africa’s Player of the Year.

Strauss had to curb her participation in 2010 to concentrate on her studies and secured her bursary with an impressive matric result. She claimed a runner-up finish in the Sanlam South African Women’s Amateur Stroke Play Championship in 2011 and reached the semi-finals of the SA Women’s Amateur before she departed for Texas, where she has been an invaluable member of the Texas Longhorn team.

Strauss anchored the Texas Longhorn Women’s Team as the number one player in 2014 and recorded two top 10 finishes, including a career best tie for third at the Minnesota Invitational.

“It was a dream come true when I received my acceptance letter from the University of Texas and the last three years have been amazing,” the psychology student said.

“I’ve done well academically, I’ve made a ton of friends and I’ve played at amazing golf courses. My game has matured a lot, especially with regard to patience and course management.”

“I always enjoy coming home and lining up against the top amateurs to stay competitive. It gets the juices flowing again before I fly back to the United States.”

She believes she will bring a lot of mental strength to the matches in Australia.

“You have to play well above the strengths of your opponent and try to make some birdies to get the momentum going,” said Strauss. “I have learned how to tough it out on US college circuit and I never give up.”